The Flight of the Wild Geese

Society Jul 31, 2017
Wild geese were once a common sight throughout Japan, but overhunting since the late 1800s caused their numbers to decline drastically to just 5,000. Geese migrate to Japan from Siberia, and it was a letter from the Soviet Union that helped them in their time of crisis.

One of my indelible childhood memories is from a few years after the end of World War II, when I was a young elementary-school pupil. I had been evacuated during the war, and the Tokyo I came home to was a burned-out wasteland. It was a day in fall. Looking up, I watched a flock of several dozen white-fronted geese fly in tight formation cross the clear blue sky, honking to each other as they went.

Around me, people cried out in excitement: “It’s a flight of geese!” “Just listen to them!” When I told my mother about it later, she sang me an old lullaby, Sato-gokoro (Longing for Home).

Geese were not unusual in Tokyo in those days, when their arrival was a yearly event announcing the start of a new season. Since then, though, geese have disappeared from the skies over the capital, although over the last 10 years or so I have once again heard of people in different parts of the country seeing flocks of geese flying in formation.

The Ishikari River winds its way across the center of Ishikari Plain, a lowland area in the west of Hokkaidō. Near the river is Miyajimanuma, a small marshland covering some three hectares. It is early October, and the trees around the marsh are beginning to assume their autumn finery. A squadron of white-fronted geese flies into view. Seen in silhouette, the birds appear to skim the tips of the trees.

Up to several dozen geese move in formation. They fly in file, then form a line that stretches out sideways before changing into a V shape. Like a wave advancing to the shore, the geese bear down on the marsh. Suddenly, the formation breaks up in midair, and like leaves from the trees the geese descend to the surface of the water. They cry out to each other in high-pitched, honking calls. 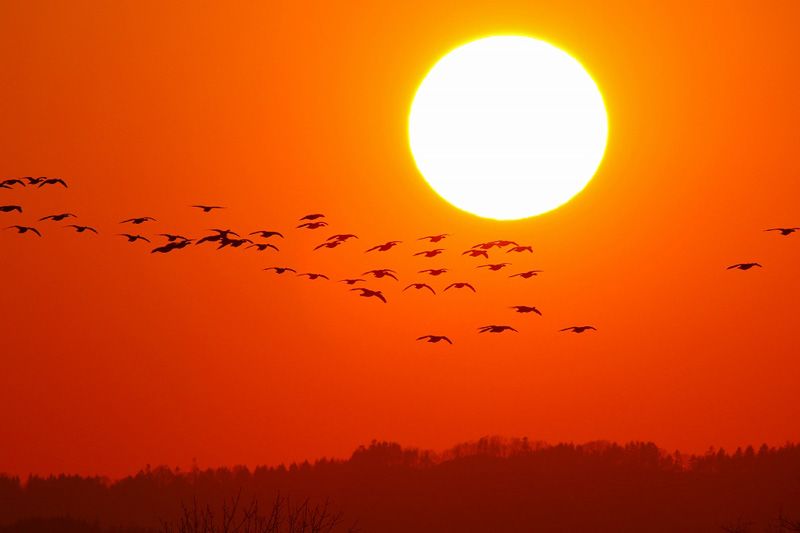 Bathed in the evening glow, white-fronted geese return to their roosting grounds at Miyajimanuma. (© Nakamura Takashi)

Their arrival is the end of an epic 3,000-kilometer journey from Siberia. Before long, more flocks of geese return from the neighboring paddy fields, where they have been pecking at fallen rice grains. The whole marshland has come alive with geese, and their clamor is almost deafening. I am reminded of a haiku by Kobayashi Issa (1763–1827). A prolific poet, Issa liked geese so much that he wrote 448 haiku about them. He wrote this particular verse in the town of Sotogahama, on the shore of Mutsu Bay in what is today Aomori Prefecture:

From this day forth, geese,
You are Japanese.
Now enjoy your rest.

Miyajimanuma was designated a Wetland of International Importance under the Ramsar Convention in 2002. As well as white-fronted geese, it is visited by many different species of migratory waterfowl, including whooper swans, great white egrets, great crested grebes, and northern shovelers. Miyajimanuma gained its Ramsar designation because it is Japan’s northernmost and largest stopover for migrating white-fronted geese, as well as one of the most important staging sites—places where the birds rest and gather strength during lengthy migrations—anywhere in the world. Here the birds replenish their nutritional reserves before flying on to the Tōhoku or Hokuriku regions of Japan. Some go even farther, ending up dispersed across the countries of Asia. 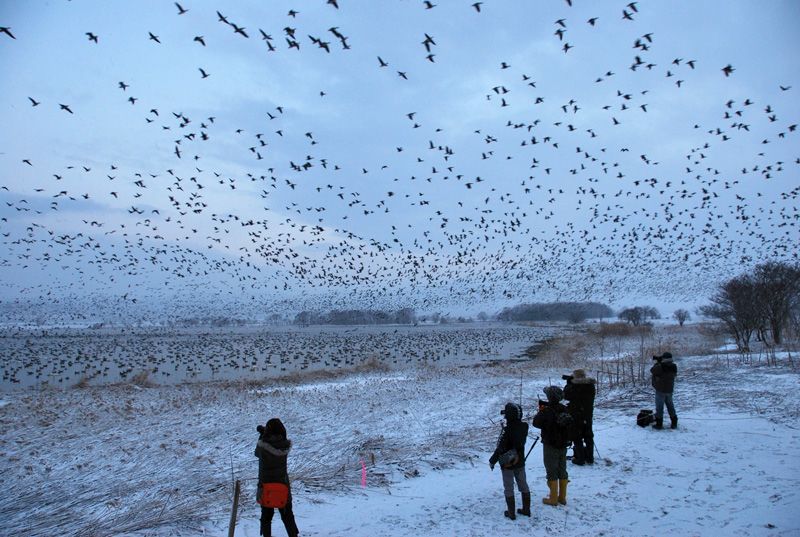 Miyajimanuma Waterbird and Wetlands Center and other organizations have surveyed the numbers of white-fronted geese that gather at Miyajimanuma before flying back northward in spring. There were fewer than 500 birds a year from 1975 to 1988, so that even during the migration season there was little activity at the lake. The number had risen to over 40,000 birds by 1997, though, and in 2015 around 80,000 birds arrived to set a new record. From Miyajimanuma, the geese fly over the Sea of Okhotsk to the Kamchatka Peninsula, their staging ground for the final return to their breeding grounds across Siberia.

The kanji character for goose (雁), which has been in use since ancient times, can be read as either gan or kari. This does not refer to one specific species, but is a general term for members of the goose family. There are 14 species known worldwide, of which 9, including the white-fronted goose (Anser albifrons), the bean goose (A. fabalis), the cackling goose (Branta hutchinsii), and the brant (B. bernicla), have been recorded in Japan. Some 90% of geese seen in Japan are white-fronted geese; all are winter visitors, arriving in September and staying until March.

The white-fronted goose is mostly dark brown, with greyish tints. In size it is midway between a mallard and a swan. It takes its English name from the white forehead; its name in Chinese, 白额雁 (baieyan), has the same meaning. It has been a familiar bird since ancient times, and appears frequently in Japanese folk tales, poems, literature, and folklore. It was often the subject of paintings on folding screens and was a popular motif in family crests.

The white-fronted goose. A migratory bird, it breeds in places in Greenland, Canada, Alaska, and Siberia in the Arctic Circle, and overwinters in temperate zones in Europe, North America, Japan, and other regions. It is the best-known member of the goose family. (Illustration by Izuka Gō)

The white-fronted goose is mentioned in 80 poems in the Man’yōshū, an eighth century anthology of Japanese poetry, and is second only to the little cuckoo. The official records of the Edo shogunate (1603–1867) include details of the shōgun’s hunting—467 geese of different types were taken, greater than the number of cranes or any other birds.

The meat of geese has long been appreciated, and goose bones have even been found in shell heaps from the prehistoric Jōmon period. From the Nara (710–94) and Heian (794–1185) periods onward, goose meat was a luxury enjoyed by the privileged classes of the imperial court and the aristocracy. The Edo shogunate prohibited eating wild birds for some time, but goose meat still came to be regarded as a special delicacy. Buddhist monks were forbidden to eat meat, and as a substitute they made ganmodoki, literally “pseudo goose.” This deep-fried tofu creation mixed with thinly sliced vegetables is today an essential ingredient in oden, a warming winter hot-pot dish. One theory is that ganmodoki was made to taste like goose, an indication of how highly goose meat was regarded.

In 1734, the eighth shōgun, Tokugawa Yoshimune, ordered the herbologist Niwa Shōhaku to conduct an exhaustive survey of animals, plants, and minerals across the whole country. The results of the survey were compiled in the Kyōhō-Genbun shokoku sanbutsuchō shūsei (Kyōhō-Genbun Registry of Productions of the Provinces). The original manuscript no longer survives, but the agricultural historian Yasuda Ken re-created the contents using copies that still remained in the feudal domains and other regions. His work gives us an insight into the distribution of wild plants and animals across the country at the time, letting us imagine the richness of the wildlife in Edo-period Japan.

The re-created production registry covers about 40% of the Japanese archipelago, and the plants and animals reported from the feudal domains and the shōgun’s lands were meticulously recorded, together with illustrations. For example, the cockroach (gokiburi in standard Japanese) was reported from the Satsuma Domain under the local name of amame. The records show that wolves roamed across areas from Tōhoku to Kyūshū, and that the Japanese otter, which is now extinct, was found throughout the country.

With the exception of some regions where the production registry did not survive, the records show that geese were found across practically the whole country. They were commonplace birds that could be seen anywhere. 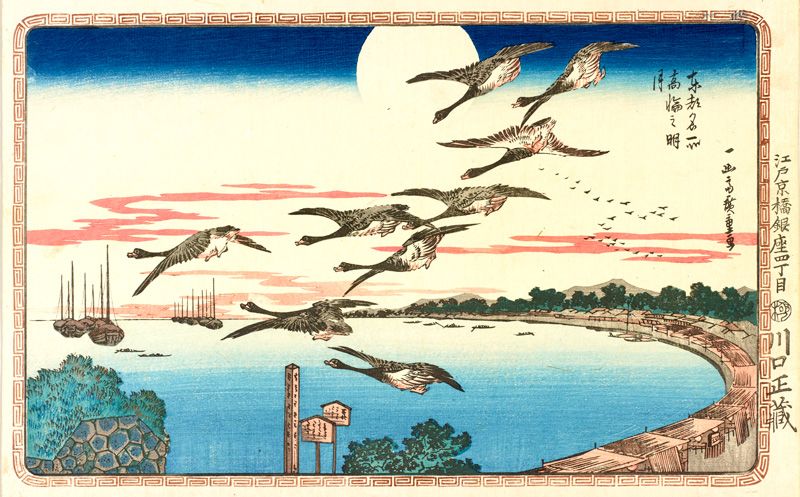 Utagawa Hiroshige, “Full Moon at Takanawa,” from the Famous Views of the Eastern Capital series. (In the collection of the Ōta Memorial Museum of Art)

The novel Gan (trans. The Wild Goose) by Mori Ōgai (1862–1922) is set in the vicinity of the Hongō neighborhood of Tokyo’s Ueno district. First serialized in 1911–13, it tells the story of a fleeting love between the protagonist, a medical student at the University of Tokyo, and a beautiful woman forced to become the mistress of a moneylender to provide for her impoverished parents. In the story, the main character tosses a stone into Shinobazu Pond in Ueno Park, accidentally hitting a goose and killing it. In writing of the birds moving to and fro across the surface of the pond, Ōgai tells us that white-fronted geese lived in the very center of the capital a hundred years ago.

A Bad Time for the Birds

From the start of the Meiji period (1868–1912), geese began to suffer. They had previously been hunted with nets and traps, but the ban on shooting geese was lifted and they were hunted relentlessly. Forestry Agency hunting statistics include records of goose hunting in every prefecture except Hiroshima, Kōchi, and Miyazaki until 1962. From 1967, mainly in western Japan, the number of geese taken began to decline precipitously. According to an inventory of goose habitats in Japan edited by Miyabayashi Yoshihiko and published by the Japanese Association for Wild Geese Protection, there were some 60,000 migratory geese a year in Japan during the 1940s, but this fell to approximately 5,000 by 1970. In addition, there had previously been 150 wintering grounds, but this number shrank drastically to 25.

The disappearance of white-fronted geese from locations across the country went hand-in-hand with Japan’s rapid economic growth from the latter half of the 1950s to the 1960s. Wetlands and marshes were reclaimed to make space for industrial areas, while wintering grounds were lost when levee protection projects were carried out and land was cleared for residential areas or golf courses. Some 60% of the nation’s wetlands are believed to have been lost over the past 100 years. Geese were driven to the paddy field belts of the Tōhoku region and along the Japan Sea coast, where lack of space meant they were forced to live in overcrowded conditions.

This led to an incident that took place in 1973. Dr. Yamashina Yoshimaro, head of the Yamashina Institute for Ornithology, showed me a letter he had received from the Soviet Academy of Sciences. This letter pointed out that birds migrating from Siberia to North America, Europe, or the Middle East returned to Siberia every year in roughly the same numbers. However, when birds migrated to Japan, or migrated further south via Japan, very few returned. Why, the letter demanded to know, was this?

Dr. Yamashina was very unhappy about the plight of migratory birds. He said there are a great many migratory birds in the Japanese archipelago, and many of them fly between Japan and Asia, Russia, North America, Australia, and other regions. No one in Japan seemed to accept that migratory birds did not just belong to this country, but were a matter of international concern.

However, Diet member Katō Shizue heard Dr. Yamashina’s complaint. She read the letter out at a meeting of the Lower House Foreign Affairs Committee in April 1974, grilling the representative of the Environment Agency (now the Ministry of the Environment) over migratory birds. The stenographic record of the meeting gives a rather flustered response from the agency official, who admitted that while Japan had achieved enormous economic advances over the preceding years, it was perhaps true that sufficient consideration may not have been given to such matters. The Environment Agency thereafter committed itself to the conservation of migratory birds. This was a memorable meeting—the National Diet had finally gotten serious about conservation.