Growing Pains: A Father and Daughter on Islamic Parenting in Japan

Society May 8, 2018
It is said that children follow in the footsteps of their parents, although for mixed-culture families in Japan this is not always the case when it comes to faith. In this article we look at a father-daughter couple to explore the issues Muslim parents face in bringing up a child in non-Muslim Japan.

A Bond of Love

Growing up, Yousuf Sarrah does not recall wearing a swimsuit like other girls in the neighborhood. Even at the height of summer, the 22-year-old resident of Narashino in Chiba Prefecture says she stayed covered up, donning nothing more revealing than a skirt with a hem set solidly below knee level. Even as an adult, she prefers outfits that are not revealing. While she is not Muslim herself, she explains, her conservative fashion sense still reflects the thinking of her father, Pakistan-born Yousuf Ali.

Ali, a native of the southern city of Hyderabad, came to Japan in 1986 to work and distance himself from the worsening public safety he saw in his native land. Not long after his arrival he met and fell in love with his wife. The couple married in 1991, but Ali says the road to matrimony had a few unexpected curves.

Muslim parents in Pakistan customarily hold sway over who their children marry, and according to Ali the idea of wedding a foreigner outside the faith did not sit well with his mother and father. Ali realized his parents were trying to block the nuptials after struggling to arrange for the necessary paperwork to be sent from Pakistan. His younger brother eventually came to the rescue, and with all the essential documents in order, the wedding went ahead. Ali’s parents did not easily forgive their son’s impudence, though, and it has only been in the last five years that they have finally come to accept the union.

In addition to Sarrah, Ali and his wife also have an older son. While they insist they love both their children equally, there is no denying that father and daughter have a special bond. Ali’s eyes light up as he tells about Sarrah graduating from university this past spring and landing her ideal job. But while he is excited for his daughter, as a Muslim father he admits he is troubled that she does not share his faith.

Ali says he did not push his children to be Muslim, trusting that they would come to embrace Islam as a matter of course. From the outset the family observed various tenets of the religion, including restrictions on dress, food, and alcohol. Ali would even refrain from praying in the Japanese manner when visiting Shintō shrines or the graves of his wife’s relatives. He tried to set an example with his own actions but recognizes now that there were other factors at play.

“We live in Japan, so of course I wanted the children to be free to experience the customs and practices of their mother’s homeland,” he explains. “Personally, I enjoy visiting temples and shrines and would often take the kids along. I did this certain that what I taught them about Islam would bear fruit when they became adults. In retrospect, I was a bit naïve in my expectation.” 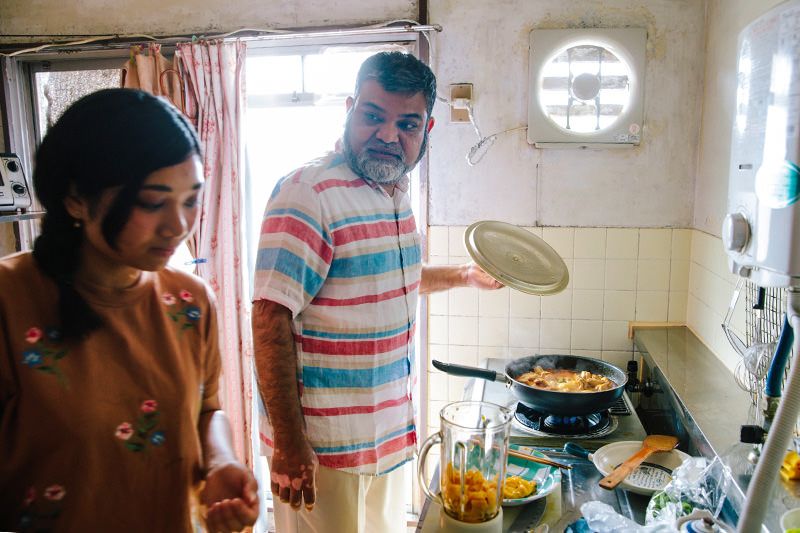 Ali and Sarrah prepare a halal meal together. 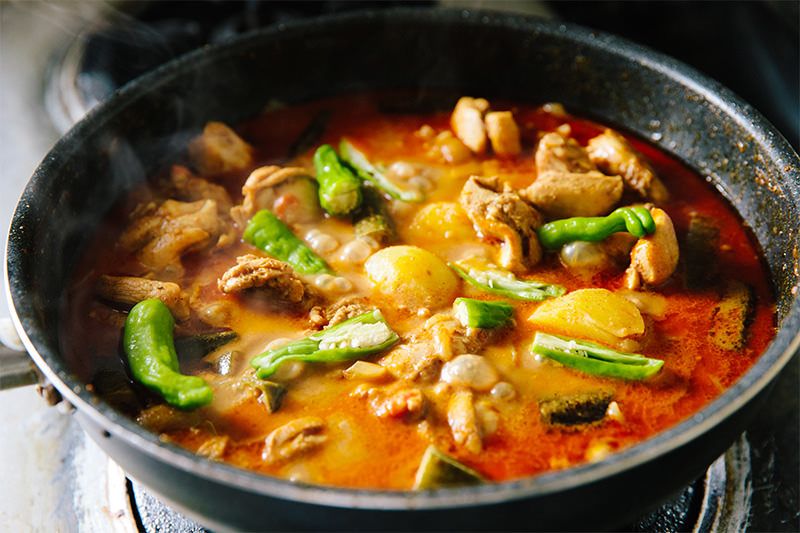 Homemade curry with chicken and vegetables.

Ali considers the decision to convert to Islam a personal affair and does not berate his children’s decisions, although he does wish that his family shared his religious beliefs. He says he had stoically accepted the fact that his wife and son were not going to become Muslim and had pinned his last hopes on Sarrah.

He took her from the time she was a little girl to religious meetings, where they would eat and worship with other Muslim families from around the world. Sarrah made many friends, and as she got older she helped look after younger children at the gatherings.

Sarrah, meanwhile, explains that she was motivated to attend more out of respect for her father than by religious aspirations. “My mother and brother didn’t go to the meetings,” she says. “I had no desire to become Muslim, but I felt it was my duty to keep my father company. Other people brought their families and I didn’t want him to have to attend alone. I usually kept him company during morning prayers at home too. He never once demanded I become Muslim, though.”

When Sarrah entered elementary school, Ali worked with administrators and teachers to provide an environment compatible with the needs of his daughter. This included allowing her to bring in side dishes from home when school lunches contained pork and to sit out swimming lessons on pool days to avoid being seen in a bathing suit. Art class was another area where understanding was needed. To avoid violating Islamic proscriptions against idolatry, Sarrah was excused from such artistic endeavors as drawing and sculpting animals and people. (The only portrait she made during six years of elementary school was one of Ali, for Father’s Day.)

The school’s staff took a positive attitude to Ali’s appeals and even introduced new rules that allowed Sarrah to interact with her classmates more freely, including permitting students to participate in swimming lessons in full-length outfits.

As an adolescent, Sarrah began to feel out of place at the meetings she attended with her father. Most of the participants, including many long-time friends, were devout Muslims, and she found it increasingly difficult to match their fervent study of Islam. A friend from India eventually noticed her lack of enthusiasm, and out of consideration for her and others at the gatherings suggested she stop attending rather than feeling obliged to go through the motions.

While her friend’s words hit Sarrah like a bolt out of the blue, they helped her recognize why she had felt increasingly awkward at the meetings. Without mentioning the incident, she admitted to her father that it was not in her heart to be Muslim and that she would stop accompanying him to the gatherings. Ali respected his daughter’s decision and did not pursue the issue.

Sarrah says she might have converted to Islam had circumstances been different. “I love my father,” she declares, “but I grew up in Japan and many of the beliefs and facets of Islamic culture remain foreign to me. I’m used to the diet, but as a Japanese person it is hard to adopt many other aspects of the religion. If I’d learned to read the Koran or visited Mecca when I was younger I might feel different about becoming Muslim, but I’m too old now.” 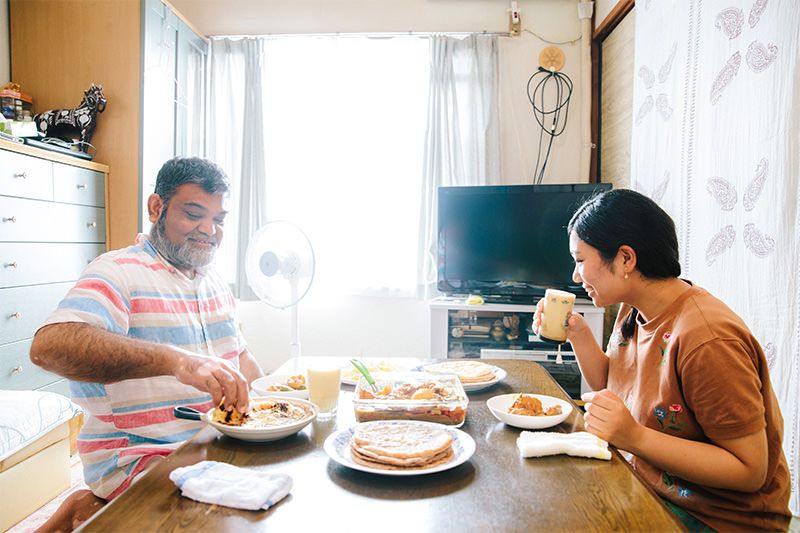 Ali and Sarrah enjoy lunch together at home.

Growing up under Ali’s watchful but loving eye, Sarrah understands that Muslim men feel a strong obligation to protect the virtue of their wives and daughters. However, she also feels that limiting the freedom of women to move about society freely is out of step with Japanese culture.

“I appreciate my father’s concerns and that he wants to guard my dignity,” she explains, “but I can’t live like that. This is Japan, after all. I have just started my career and it makes no sense for me to hide away at home or don a hijab like I was living in a Muslim country.”

Giving Away the Bride

Although Sarrah’s words sting, Ali listens quietly to his daughter, seemingly resigned to her decision not to convert to Islam. He is aware, though, that a greater emotional challenge looms down the road: that of giving his daughter’s hand away in marriage. Ali realizes that if Sarrah chooses to wed, her suitor will most likely not be Muslim. Another troubling prospect is that Japanese wedding ceremonies frequently have Christian or Shintō themes.

Furrowing his brow, Ali admits that he is not yet ready to consider the idea. “I went against my parent’s wishes when I wed, so I have to respect her decision. For the time, though, I prefer to keep from thinking about it.” 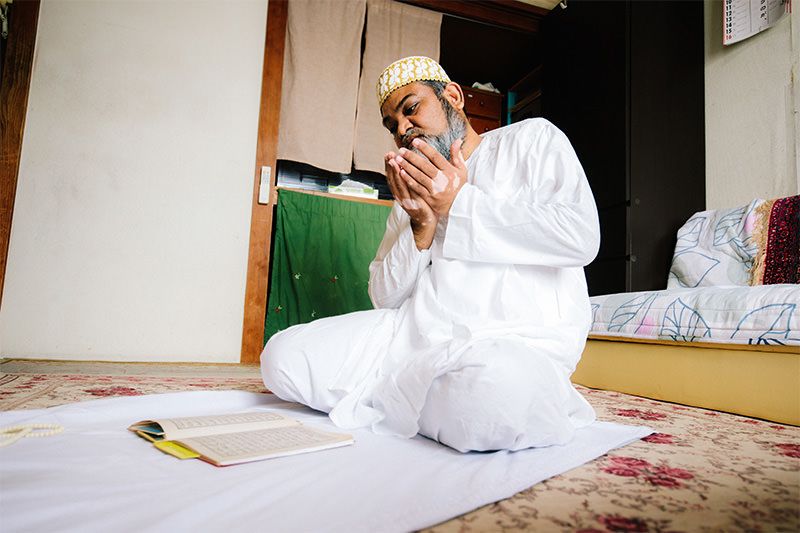 Sarrah hopes to keep from worrying her father about possible marriage plans but is aware there are limitations. “Weddings are full of religious overtones,” she says. “I prefer to skip having one altogether for my father’s sake, although it’s hard to say what will happen if my future husband and his relatives insist on a ceremony.”

Although father and daughter do not see eye to eye on faith, the two are confident their relationship is strong enough to weather whatever issues may lie ahead.

(Originally published in Japanese on March 26, 2018, based on an interview by Yamaguchi Kazuomi of Power News. Photographs by Imamura Takuma. Banner photo: A commemorative father-daughter photograph taken for Sarrah’s Coming-of-Age Ceremony. Courtesy the Yousuf family.)