Society Oct 4, 2017
Japan’s biggest criminal organization, the Yamaguchi-gumi, has broken up into three groups. While this would once have heralded a likely gang war, tightened legislation has made it difficult for the yakuza to act, preserving a curious balance of power. In this unusual situation, fundamental rules of the yakuza world are crumbling.

Forced into a Quieter Existence

In August 2015, a Kobe faction broke off from the main organization. Then in April 2017, a new group known as the Ninkyō Yamaguchi-gumi splintered from the Kobe gang, leading to a three-way standoff. However, toughened legislation targeting organized crime has limited their rivalry to skirmishes, as open warfare might trigger the full legal dismantling of their groups. This leaves the three sides in a curious state of equilibrium.

“We’ve been very careful since the split two years ago,” a Yamaguchi-gumi affiliate member grumbles. “We go out drinking much less often so we don’t run into any problems with the Kobe gang. As there’s nowhere else to go, we always just drink canned beer at home, the office, or friends’ companies. And when we do go out, it’s to somewhere owned by relatives or the younger members’ women, so we keep it in the family.”

Things are much the same for the Kobe Yamaguchi-gumi, as described by one of its affiliate members. “Recently, our drinking and karaoke all take place in the daytime. It’s easy to get caught up in trouble at night, so we don’t have any choice. But I still have to be ready to deal with any friction that crops up during the nighttime, so I can’t enjoy a relaxing sleep. My phone is always by my pillow.”

History of the Yamaguchi-gumi Split

Shadow of a Past War

Statistics from the National Police Agency show that there have been 2,000 arrests related to around 100 incidents involving clashes between the rump Yamaguchi-gumi and its Kobe faction since the split two years ago. For example, in March 2016, a dump truck was driven into a Yamaguchi-gumi organization office, while in May that year a senior member of a group affiliated to Kobe was gunned down. On June 6, the Hyōgo prefectural police arrested Inoue Kunio—the head of the Kobe faction—on the minor charge of using a female friend’s name to apply for an upgraded mobile phone model four years previously. The Kyoto prefectural police then produced a fresh arrest warrant on suspicion of inflicting bodily injury in January. Although Inoue was released without indictment in July, police forces are stiffening their offensive. This may be due to memories of the Yama-Ichi War of 1985–87. 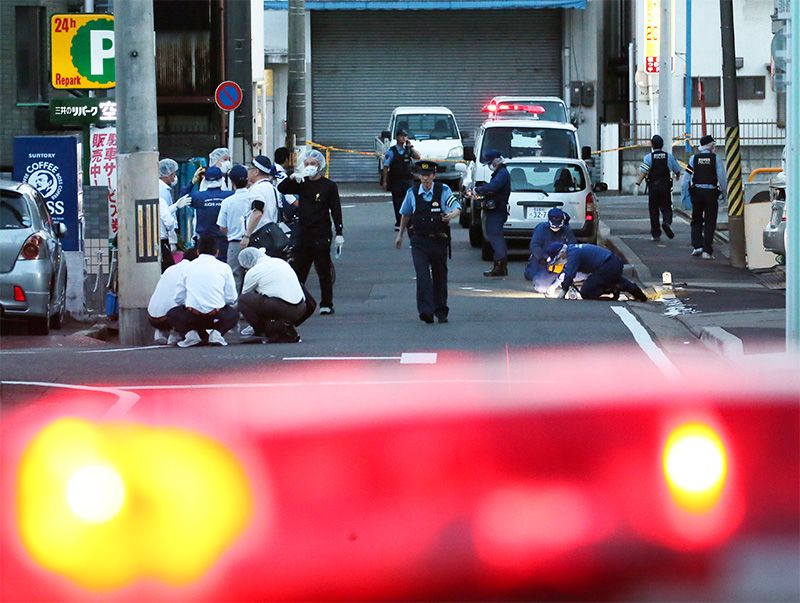 The Aichi prefectural police conducting an investigation on May 15, 2016, in Nagoya, where a boss of a Kobe Yamaguchi-gumi affiliate was shot. (© Jiji)

This underworld conflict followed an earlier rupture in the Yamaguchi-gumi caused by a succession dispute. The breakaway Ichiwa-kai group shot the newly appointed leader of the Yamaguchi-gumi, resulting in all-out gang war. The hostilities claimed 95 lives—including ordinary citizens—in some 320 clashes. While support for Ichiwa-kai eroded after it split away, the difference this time is that Kobe Yamaguchi-gumi has maintained its level of power since going independent.

According to the NPA, the Yamaguchi-gumi remained Japan’s largest criminal organization as of the end of 2016, with 5,200 members on its rolls. At that point the Kobe faction, which had yet to split, was the third largest Japanese gang, with 2,600 members. As it is based around the largest group traditionally affiliated to the Yamaguchi-gumi—the Yamaken-gumi—it considers itself to be the “true” incarnation of the gang and continues to use the same crest.

Based on materials published by Japan’s National Police Agency. Data as of December 31, 2016.

One reason the breakaway group has managed to hang on to its strength may be that it successfully laid the groundwork with friendly gangs. Sakurai Kenji—a former Yamaguchi-gumi boss turned author—says, “From Kansai westward, there are many groups on good terms with the Kobe Yamaguchi-gumi.” Osaka’s Sakaume-gumi and Okayama’s Asano-gumi were allied with the Yamaguchi-gumi, but after the rupture they have drawn closer to Kobe.

Meanwhile, the Yamaguchi-gumi is working to increase solidarity with groups in the east of Japan. “Before the split, Kantō gangs tended to view the Yamaguchi-gumi as a rival, but that attitude is changing,” explains Sakurai. “With the mediation of the favorably disposed Inagawa-kai and Matusba-kai, the distance between the Yamaguchi-gumi and the Sumiyoshi-kai, Tokyo’s largest gang, is shrinking. While there appear to be some objections from members of the Tokyo groups who would prefer to recognize the Kobe group, on the surface, at least, everything is calm.”

The two sides now appear to have fallen into a broad pattern of east-west opposition across Japan, centered on Kansai. And yet, Sakurai says that with the addition of the toughened conspiracy law—which came into force in July 2017—to existing legislation targeting organized crime, the legal threat is such that they cannot act. This has in a sense created the present balance of power.

Under these circumstances, the rules of yakuza society are changing. Its gangs were formerly characterized by their adherence to the jikisan loyalty system. The word jikisan once applied to retainers directly responsible to the Tokugawa shogunate in the Edo period (1603–1868). In the yakuza world, it refers to members who have gone through the sakazuki drinking ritual with the oyabun (gang boss), receiving the cup directly. The ritual is a way of creating symbolic parent-child or fraternal relationships to ensure firm devotion.

Leaving an organization after completing this ritual was taboo in a world where the oyabun had ultimate power. However, breakaway groups maintain that they are honoring a higher loyalty. The Yamaguchi-gumi formally severed ties (zetsuen) with the senior members of the Kobe faction, which in turn applied the same zetsuen measure to the leaders of the Ninkyō group.

Zetsuen and hamon (excommunication) punishments effectively drove those who received them out of yakuza society. Associating with these outcasts was regarded as a hostile act against the gang that imposed the discipline. This was an iron rule that contributed to maintaining the yakuza order.

It is now crumbling. “Before, it was the end for gangsters who received these punishments,” notes Sakurai. “But now they’ve lost their power. It doesn’t matter if you’ve been given hamon or zetsuen. You can still be welcomed at an opposing group. If members aren’t scared of getting these punishments, they can do what they like. The rules have changed, and it’s making people nervous.”

No Time to Argue

Another issue for gangs is falling membership. Crackdowns have forced them to operate on a steadily reduced scale. At the start of the 1990s, crime organizations had a total of almost 70,000 members, but this had fallen to around 18,000 by the end of 2016. The Yamaguchi-gumi was dubbed “an army of 40,000,” including associates, but the split has helped it dwindle to a quarter of that size. 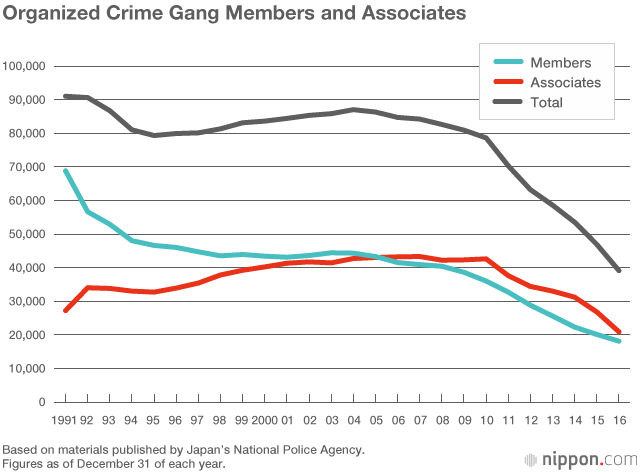 As ruptures have further diminished gang strength, members are feeling the pinch. “We don’t know when the next clash will come, for whatever reason, so we need the numbers,” a Yamaguchi-gumi member says. “But at our office, there are less than a fifth of the members we had at our peak. And some of the subordinate groups won’t send people to help out with duties at the headquarters.”

A Kobe faction member comments. “With part of the Yamaken-gumi breaking off to form the Ninkyō group, morale has definitely dropped. We don’t have enough people, and some of the bosses only have a few kobun [followers].”

Faced with this plight, many ordinary members are seeking to avoid unnecessary trouble. “The split happened at the top, so it has nothing to do with us at the bottom,” says one member of a subordinate group. “Even if there’s friction, we talk it out and keep things moving smoothly, because we want the same thing. We’re all in the same business, and it’s the yakuza way to work together with brothers we know.” There have even been cases of members of the three different factions working together at summer festivals, a source of income for the gangs that parcel out the rights to set up booths. “Tougher laws mean a shrinking market, so we don’t have time to fight among ourselves. We’re in different groups, but being on the front line brings us together.”

The Kobe faction member agreed. “On the street, we stay friendly so everyone’s happy. It’s a kind of unspoken agreement. If we bump into another, we show that we don’t want to stir things up. Whether it’s us, them, or the Ninkyō group, we all have the same crest. So I wish we’d stop the arguments and join up again. Instead of getting at each other’s throats, we should just think of everyone in the same category, as yakuza.”

(Originally published in Japanese on September 4, 2017. Reporting and text by Power News. Banner photo: Tsukasa Shinobu, head of the Yamaguchi-gumi, in Kobe after his release from prison on April 9, 2011. © Jiji.)