Society Nov 8, 2017
Splits in the Yamaguchi-gumi, Japan’s most powerful criminal organization, hint at tough economic times for the yakuza. Government crackdowns have dramatically reduced gangster income, dragging the group down from its once dominant position.

These are hard times for Japan’s yakuza. Successive splits have divided the strength of the powerful Yamaguchi-gumi criminal gang. In the initial rupture of August 2015, a Kobe faction broke away. Then this group itself fragmented in April 2017, leaving three organizations: the Yamaguchi-gumi, Kobe Yamaguchi-gumi, and Ninkyō Yamaguchi-gumi.

The primary reason for the splits is that gang members now struggle to make a living. At one time, wearing the Yamaguchi-gumi crest and leading a group of young men ready to put their lives on the line was a path to achieving the “gangster dream.” Yakuza members who have completed a drinking ritual with the organization boss are known as jikisan and are considered directly subordinate to him. These jikisan once had riches to spend on houses, cars, and women. However, recent amendments to legislation and nationwide ordinances targeting organized crime have tightened the screws to the point where yakuza cannot make ends meet.

Yamaguchi-gumi membership fees amount to ¥850,000 per month. Rebelling against this financial burden and rigid control by the gang leadership, the Kobe faction—centered on Inoue Kunio, leader of the Yamaken-gumi, the organization’s largest group—went independent, setting fees for its jikisan at less than ¥300,000. When this loss of revenues from the broader membership pressed the new group to demand higher payments from members of its central Yamaken-gumi faction, their brewing discontent led to the formation of the breakaway Ninkyō Yamaguchi-gumi.

Past Riches a Distant Dream

Yakuza income has become severely constrained. Tougher legislation has made it difficult for gangs to earn money from lawful business, so they must now rely primarily on their illegal activities. The main areas are drugs and telephone scams. In the Yamaguchi-gumi, dealing drugs is ostensibly taboo, but the gang turns a blind eye to endeavors by individual members. Although the trade is highly risky, to some extent the group’s survival depends on the high returns gained from methamphetamine sales. Scamming elderly members of the public also falls considerably short of the image of chivalry that the yakuza like to project, but the business continues regardless.

There are still some legitimate fields, like real estate and finance, that provide room for the gangs’ dirty work. It can be useful for businesses trying to navigate complex property rights issues, for instance, to have a muscle backing. Jobs like this remain in Tokyo in particular. Criminal organizations can also profit from trading when a listed company hits an economic slump. Meanwhile, new areas like online peer-to-peer lending and cryptocurrency are prime environments for yakuza fraud.

However, this kind of business is just a tenth or a twentieth of the scale it was in Japanese crime’s bubble-era heyday.

Around 1990, when Japan’s economic bubble was at its height, senior members of criminal gangs secured more easy money than anyone. Yamaguchi-gumi jikisan were said to have assets of several billion yen, and deputies to the wakagashira (underboss) over ¥10 billion. Watanabe Yoshinori, the gang’s chief at the time, and wakagashira Takumi Masaru were believed to have assets worth tens of billions of yen. As the money was not taxed, this cannot be proved directly, but flashy yakuza spending on lavish entertainment in Kitashinchi, Osaka, and Ginza, Tokyo, tells its own story. It was an entirely different era. 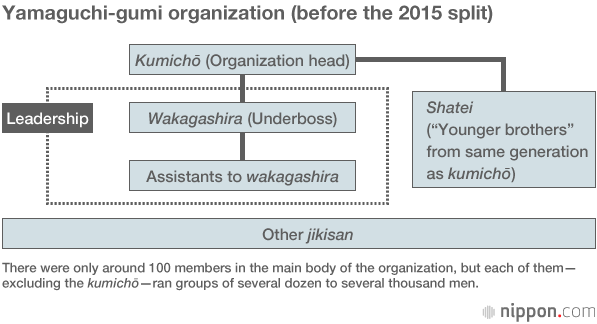 Driven Out of Public Life

The reason for the change is clear. Until the bubble era, yakuza groups made money both legally and illegally, but the government’s tightened restrictions and beefed-up compliance have frozen gangs out of corporate earnings. Now they must rely primarily on illicit business.

If they relied only on legal business, gangs would be much like ordinary companies, but it was hard to walk away from the boosted earnings made possible by a combination of activities inside and outside the law. Affiliated financial operatives could ignore legal upper limits on interest rates and make highly risky loans to companies in the certain knowledge that they would get their money back.

At the time, some viewed the yakuza as a necessary evil to some extent, performing activities that were of some value to legitimate society. In the financial sphere, for example, they could supply money at short notice when it was really needed, while in the real estate industry they were able to acquire land by all available means within a given time limit. They could deliver workers for dangerous jobs and ensure that debts could be recovered even when the claimant was competing with other creditors. They were generally tolerated, at least until the first of several antigang laws came into force in 1992.

A Century of the Yamaguchi-gumi

To see how the yakuza came to rule a vast business empire, we must look back at the history of its most successful gang, founded over a century ago.

In 1915, a former fisherman named Yamaguchi Harukichi gathered some 50 Kobe longshoremen together to form the original Yamaguchi-gumi. In addition to dock work, the group became involved in managing performers of naniwabushi, a popular form of recitation accompanied by music, operating gambling joints, and providing security at theaters.

Yamaguchi’s son Noboru took over the organization, but died in 1942 at the age of just 41 from injuries sustained in a fight. During World War II, most of Japan’s young men were in the military, so the Yamaguchi-gumi was largely inactive. It was not until Taoka Kazuo was named as the third-generation leader in June 1946 that the gang’s fortunes truly began to rise.

The prewar yakuza were largely divided into the bakuto, who ran gambling operations, and the tekiya, who set out stalls at festivals. Drinking rituals created quasi-paternal and -fraternal bonds within the organizations, which were both feared and relied on by local businessmen and citizens. However, their income was unstable and would sometimes dry up.

Taoka was a bakuto and had been hard up during the war. When he became leader, he vowed to ensure all members would have legitimate employment. This was a landmark transformation in the history of the yakuza dating back to the Edo period (1603–1868) and a first step toward the Yamaguchi-gumi becoming modern yakuza.

Taoka took the lead in forming companies. He became president of a construction firm named Yamaguchi-gumi and founded a company to supply longshoremen in Kobe’s port. He also set up an office at his home for a talent agency.

Affiliates started their own companies in such areas as construction, dock work, finance, and real estate. The Yamaguchi-gumi became a corporate body with the capacity for violence. An astute combination of these two aspects led to its national dominance. From the 1950s, the gang was sustained by the success of singing superstar Misora Hibari and the wrestling exploits of Rikidōzan. Taoka himself was vice-chairman of the Japan Pro Wrestling Alliance, which Rikidōzan established.

The Yamaguchi-gumi approached other yakuza groups to suggest putting on shows together. Agreement brought mutual benefit, but refusal meant possible reprisals. The gang’s power attracted money, which funded even greater power in turn. By the mid-1960s, it was Japan’s largest criminal organization, with 10,000 members and a national presence.

This success drew police attention, however. From 1964, the authorities set their sights on arresting Taoka. The first stage of the police strategy was to cut him off from his sources of income. He was forced to resign successively as president of the dock work company and a board member of the talent agency. With these moves, he withdrew from legitimate business.

From this point onward, the gang no longer ran companies directly. Instead, it handed its business over to corporate shatei, or “younger brothers”—businessmen outside the organization with whom it had close ties. The shatei ran the finance, real estate, and other companies, covertly paying their dues and calling on the gang when they needed muscle. Despite the clear relationship, it was difficult for the police to limit the activities of these external operators who had undergone no formal drinking ritual to officially put them in the yakuza.

This business model became standard under Taoka, and the Yamaguchi-gumi went from strength to strength. Taoka died in 1981 at the age of 68. His successor, Takenaka Masahisa, took over in 1984, but was gunned down the following year, sparking the Yama-Ichi War of 1985–87—a gang conflict between the Yamaguchi-gumi and the Ichiwa-kai, which had splintered off due to a succession struggle in the main group. Watanabe Yoshinori then effectively ran the organization as wakagashira for several years before officially taking the position of fifth-generation leader in April 1989. 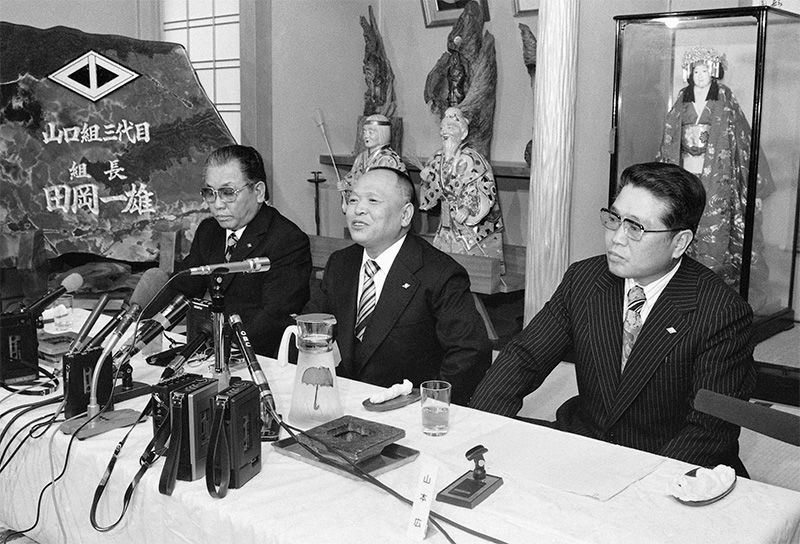 Senior members of the Yamaguchi-gumi talk to the press at the home of its leader Taoka Kazuo on November 1, 1978, following an assassination attempt on Taoka. Pictured are Oda Hideomi, Yamamoto Ken’ichi, and Yamamoto Hiroshi. (© Jiji)

Under Watanabe Yoshinori, the Yamaguchi-gumi reached its peak earning capacity in the final years of the bubble era. It became the center of the criminal world, with leadership over ultranationalists, corporate extortionists, and motorcycle gang members used as a reserve corps. However, the state was no longer able to ignore the gang’s vast funds and the illicit means used to acquire them.

Crackdowns began. As globalization accelerated, the yakuza members’ status as gangsters who could proudly display their faces and crests was an increasingly obvious anomaly compared with their peers in other countries. The state staked its pride on stamping them out.

The Act on Prevention of Unjust Acts by Organized Crime Group Members came into force in 1992. The government intensified its attack with numerous follow-up amendments. An expanded interpretation of conspiracy connected underlings’ crimes to the kumichō, who also became a target for damages under civil law. The yakuza’s vaunted pyramid structure began to crumble. By 2005, when Tsukasa Shinobu rose to leadership, the gang was putting an ever-greater emphasis on not doing anything that would harm the kumichō. At the same time, jikisan were enduring the squeeze of higher tribute payments.

Local ordinances drove a wedge between gangsters and their civilian collaborators by legally considering anyone who associated with the yakuza to themselves be “antisocial forces.” By October 2011, this sort of legislation was active in all 47 of Japan’s prefectures. Celebrity Shimada Shinsuke was forced to retire from show business in August of the same year because of his ties to organized crime. The offering up of this popular TV star as a sacrifice sent a powerful message to society. Gang members were not allowed to have bank accounts or rent property, and were effectively deprived of their rights to make a living.

Yakuza organizations are now getting by with drastically reduced income. Despite their swaggering front, they risk complete collapse. And nobody knows that better than the gangsters themselves.

(Originally published in Japanese on September 11, 2017. Text by Itō Hirotoshi. Banner photo: Guns and other smuggled items recovered from the Inagawa-kai gang on display at Tokyo Metropolitan Police Department Headquarters on August 21, 2006. © Jiji.)