Museums Off the Beaten Path

Money Through the Ages: A Walk Through Japan’s Currency Museum

Culture Nov 22, 2017
Money—always a popular subject—is front and center at the Currency Museum, a Bank of Japan facility located near Tokyo Station. Here historically important currency samples from Japan and across East Asia are on display, along with every paper note ever issued by the Bank of Japan. Get your hands on some money with this museum’s interactive displays!

From bolts of cloth to shimmering golden discs, from bags of rice to ingots of silver, currency has taken on many forms through Japan’s history. And as modern society moves increasingly to credit cards and electronic payments, it is good that a museum in Tokyo has been created to record the history of physical money.

The Currency Museum, which is part of the Bank of Japan’s Institute for Monetary and Economic Studies, was opened in 1985 as part of the commemorative events to mark the central bank’s 100th anniversary three years previously. Its aim is to collect, preserve, and study historically important currency-related materials, with an emphasis on Japanese money.

The basis of the museum’s exhibition is the Senpeikan Collection, which was gathered over many decades by renowned numismatist Tanaka Keibun (1884–1956). Tanaka collected historically important examples of currency from Japan and across East Asia, with a particular emphasis on China. The collection was held at the Senpeikan museum, but was donated to the Bank of Japan in 1944 toward the closing days of World War II to ensure its safety. 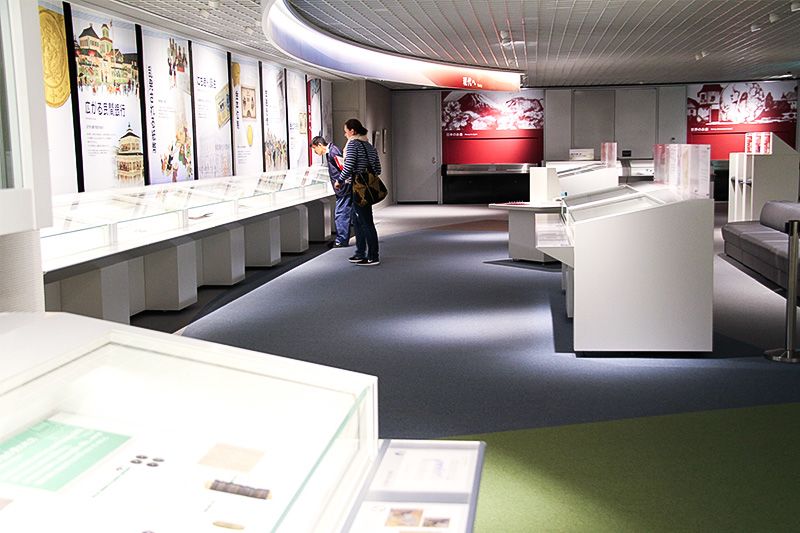 On the Site of the Old Gold Mint

The museum occupies part of the bank’s premises near Tokyo Station in the Nihonbashi district of Tokyo, the same spot where the kinza, or gold mint, stood in the Edo period (1603–1867). Here gold coins were created until the closing days of the shōgunate. Not far away is the Ginza district, which takes its name from the mint for silver coins established here in 1612, but is today the city’s swankest shopping area.

Japan issued its first metal coins in the latter part of the seventh century, with the official state history recording that an act passed in 683 prohibited the use of silver coins and instead required the use of copper. The coins issued at this time were called fuhonsen. 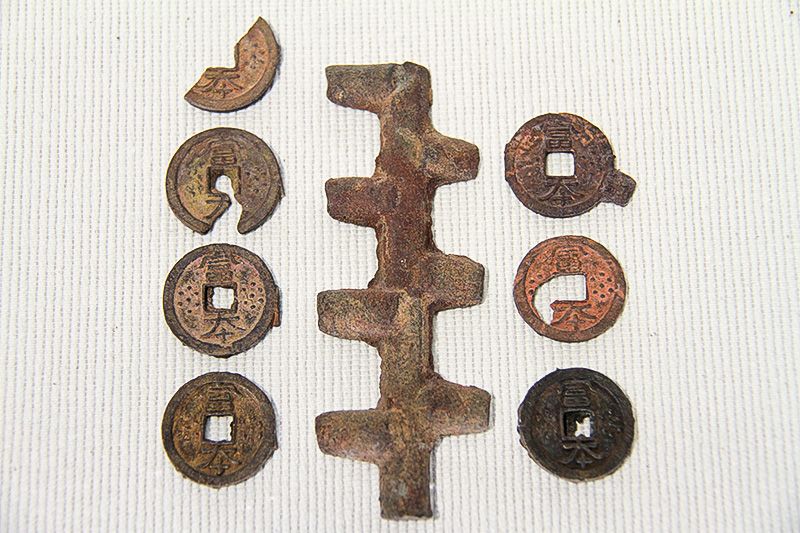 Fuhonsen, replicas of which are on display in the museum, were minted in Japan beginning in the latter half of the seventh century.

Though minted in Japan, these copper coins were patterned on Chinese specimens that were round with a square hole in the center. These ban liang Chinese coins dated back to the fourth century BCE and round coins with a square hole had slowly come into use throughout East Asia, including Japan. The early Japanese coins had the same square opening, as well as a distinctive pattern of raised dots on each face. 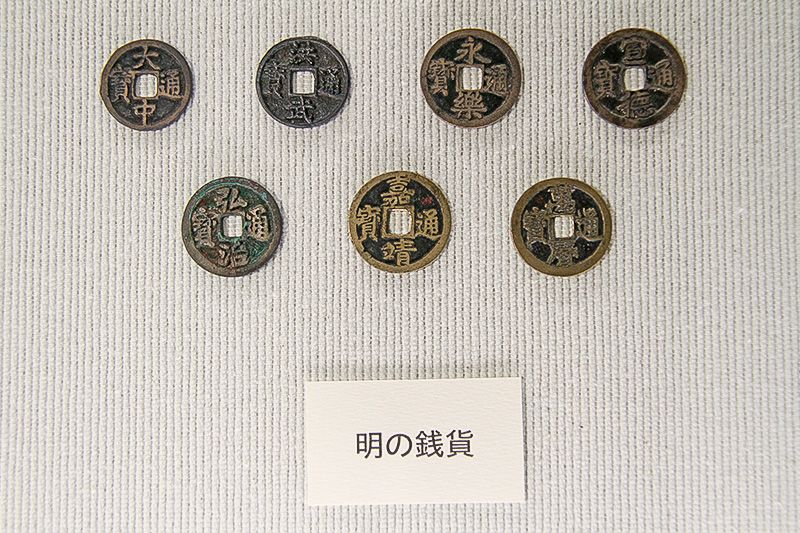 The first wadō kaichin coins were minted in the early part of the eighth century, with ancient Japan producing 13 types of these copper coins. Subsequently, however, the coins became smaller and their quality decreased as copper output fell. People disliked the smaller coins and began to turn to commodities such as silk and rice in place of money.

In the middle of the twelfth century, there was a sharp increase in the number of Chinese coins entering circulation in Japan. The domestic minting of coins began again some time later, in the fifteenth and sixteenth centuries.

One fascinating exhibit in the museum is a clay pot around 60 centimeters tall containing some 7,700 Chinese coins that was discovered in Miyazaki Prefecture. No one knows who buried this small fortune or why they never returned to recover it.

During the 264 years of the Edo period, which began in 1603, the Shōgunate issued gold, silver, and other types of coins. At the same time, clans that ruled different areas of Japan issued their own paper currencies, with as many as 200 different varieties of clan money in circulation. 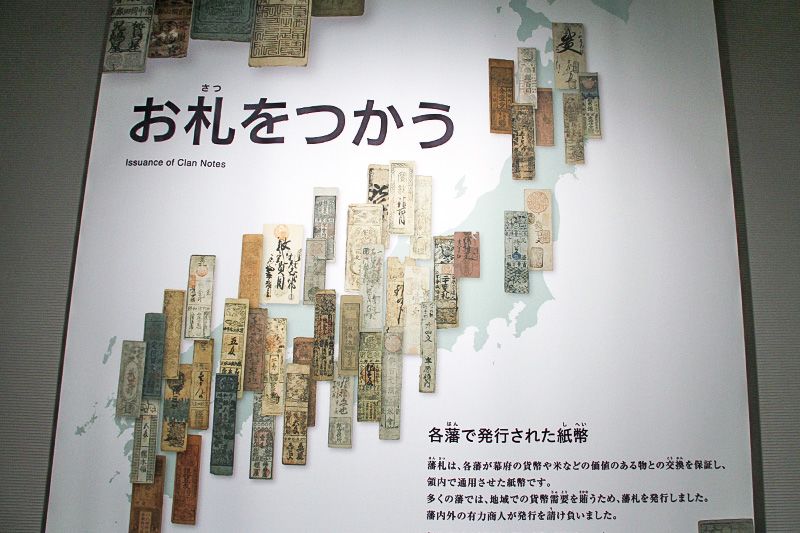 Paper currency was issued by different clans across Japan. A map in the museum shows the notes in circulation in various areas.

Moves from Metal to Paper

The museum has several excellent examples of gold ingots that were used as currency, along with oval gold coins known as ōban—larger than a man's hand and worth seven of the smaller oval coins, koban, that are larger than a man's hand. It also displays stamped gold ingots that were produced in the sixteenth and seventeenth centuries, each of which is about 95% pure gold and weighs some 375 grams. 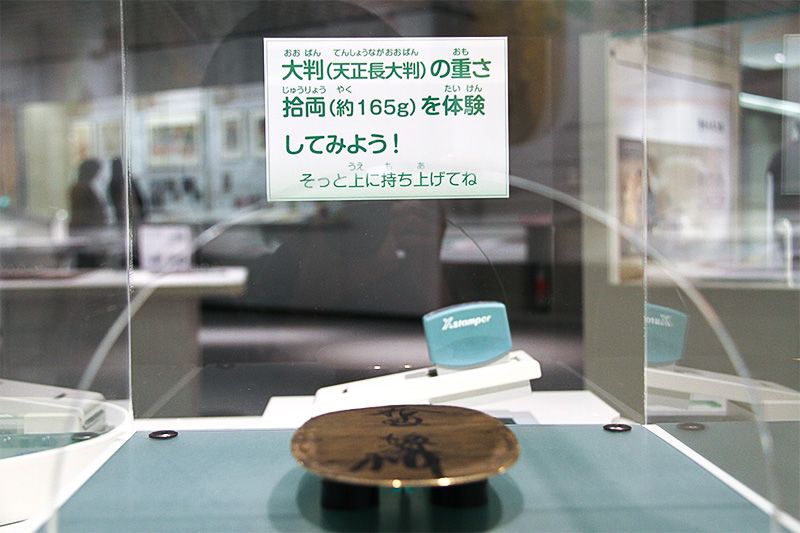 Visitors are invited to feel the weight of a traditional ōban gold coin.

In the second half of the nineteenth century, with the opening of Japan to the outside world and the advent of international trade, there was a need to implement a modern currency system in the nation. The yen was adopted as the national unit of currency in 1871, with both coins and banknotes going into circulation, and the Bank of Japan was created in 1882 to link the private banks that had previously operated across the country. Three years later, it became the sole issuer of paper money, thereby stabilizing its value. 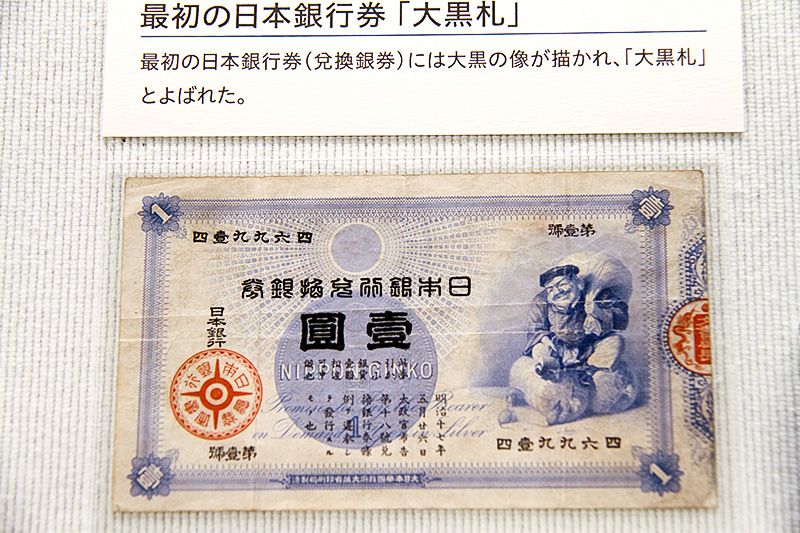 The very first banknote to be issued by the Bank of Japan featured Daikokuten, the god of wealth. 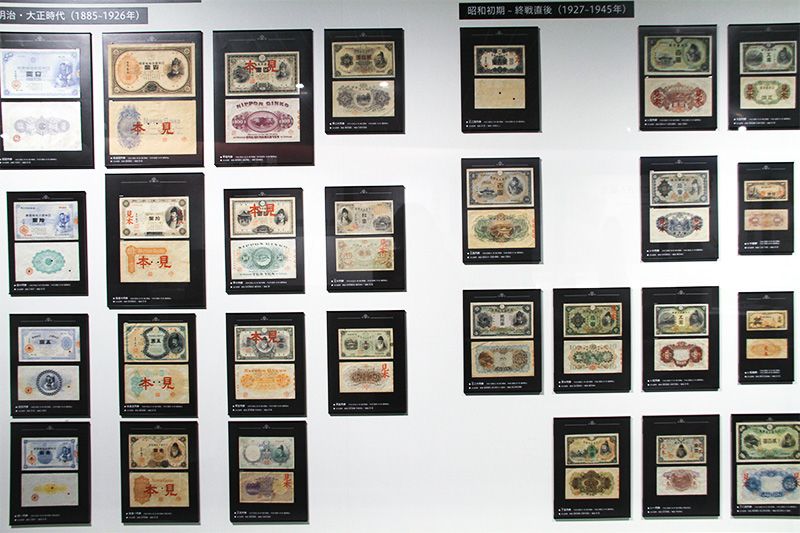 The exhibition includes a display of every paper note ever issued by the Bank of Japan.

The museum also displays examples of all the paper notes that have been issued by the bank, up to the current day, and also reveals the historical minting methods for coins. Other displays show how clans used the technologies of the day to prevent counterfeiting of their notes.

The museum has also cleverly incorporated hands-on experiences into the displays, including the opportunity to feel the weight of a traditional strongbox, senryōbako, or—in a more modern twist—to see how heavy ichi-oku en (¥100 million) is in ¥10,000 notes. 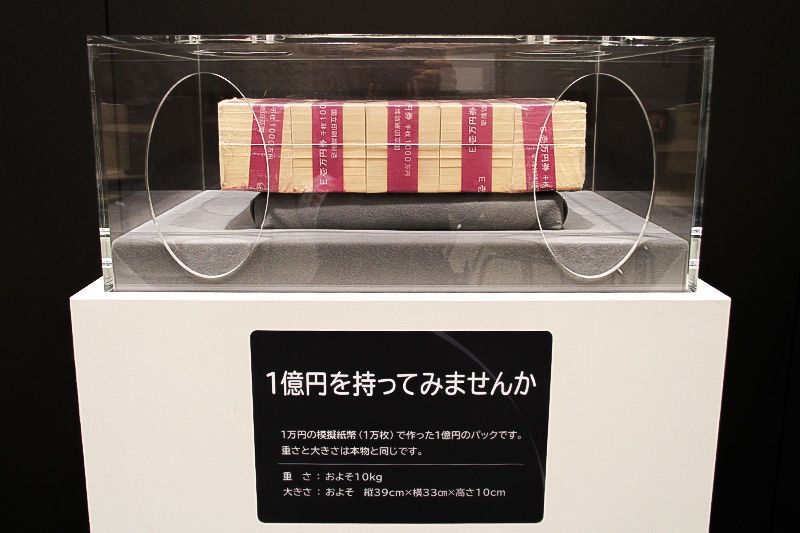 Feel the weight of ¥100 million in bills—about 10 kilograms. But don't try to take it away!