Society Culture Aug 16, 2015
Boasting 400 years of history, Ginza in Tokyo has long been a symbol of the city’s affluence. With its high-end stores and restaurants, it showcases the best of Japan in one small area.

Around 400 years ago, when Edo (now Tokyo) was beginning its rapid development as the seat of the Tokugawa shogunate, the Nihonbashi bridge became the point of departure for Japan’s most important road, the Tōkaidō, leading to Kyoto and Osaka. The first part of this route was named Ginza after the silver mint built there. In part because of its location close to Edo Castle, it became a symbol of the city’s prosperity, lined with the nation’s most famous stores.

Today the name Ginza is applied to the area around the main street Chūō-dōri that stretches north to south for some five kilometers between the 1-chōme and 8-chōme intersections. This is the top commercial real estate in Japan: the land in front of the Kyūkyodō stationery store in 5-chōme is well known as the country’s most expensive per square meter. The Wakō Building in 4-chōme, with its famous clock tower, has long been used as a meeting spot, while in the 1954 film Godzilla, the monster memorably smashes the landmark after being enraged by the chiming of the clock. 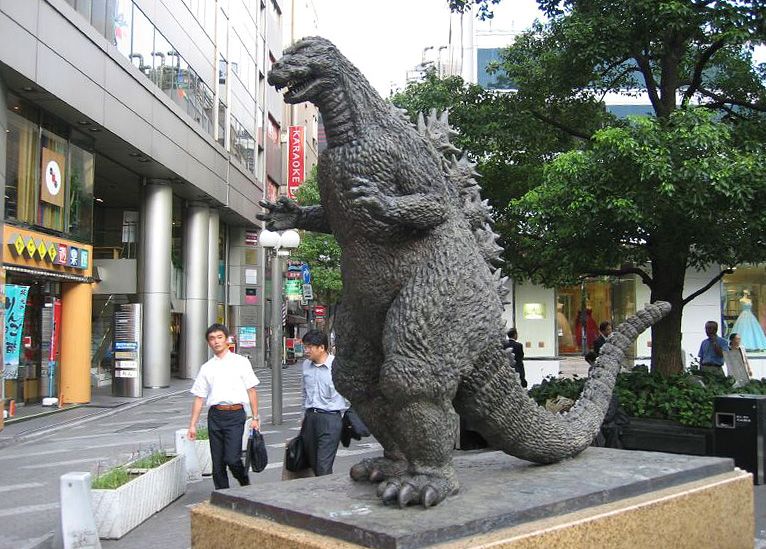 A Godzilla statue in Hibiya, near Ginza. 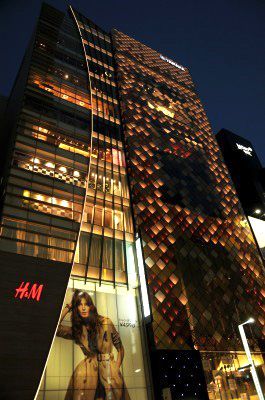 As well as designer labels, the world’s “fast fashion” chains can be found in Ginza.

From the early Meiji period (1868–1912), Ginza became a fashion center, with Western restaurants and the headquarters of newspaper companies and other modern enterprises side by side with traditional family stores. The heart of Tokyo fashion has now shifted west to districts like Aoyama and Omotesandō, but many of the world’s leading brands still have stores in Ginza, including Chanel, Hermès, Gucci, Louis Vuitton, Cartier, Tiffany’s, and Armani. Electronics giants Apple, Canon, Sony, and Nikon have showrooms in the area too, where customers can try out the latest products. As a magnet for tourists from all over the world, Ginza is Japan’s number one show window.

The area has many popular bars and restaurants. The world’s biggest fish market at Tsukiji lies a short distance away, and there are several prestigious establishments offering Edomae-style sushi and other Japanese fare. And as the entry point for Western cuisine since around the turn of the twentieth century, there are also many high-end restaurants serving international dishes. When the Michelin Guide is published every year, most of the Japanese establishments awarded stars can be found in Ginza.

Another face of Ginza is represented by deluxe clubs where the corporate elite goes to socialize. While these upscale hostess bars, with their jaw-dropping prices, are not the kind of spots ordinary people can casually drop into, there are also many reasonably priced bars offering a good level of service.

Ginza is also home to more art galleries than any other part of Japan. In these various ways, it showcases the best of the nation in one small area.

Since 1970, on weekends and holidays Tokyo has closed its most famous shopping streets in Ginza, Akihabara, and Shinjuku to traffic, turning them into what are known as “pedestrian heavens” (hokōsha tengoku). The main road Chūō-dōri in the center of Ginza is pedestrian-only on Saturdays, Sundays, and national holidays, from noon until six in April–September and from noon until five in October–March.

Free of vehicles, the streets are transformed. Ginza shops set out chairs and tables and people stroll around freely, enjoying a day of shopping. In response to the increasing influx of foreign tourists, more and more shops and restaurants are making efforts to communicate with visitors in their own languages. 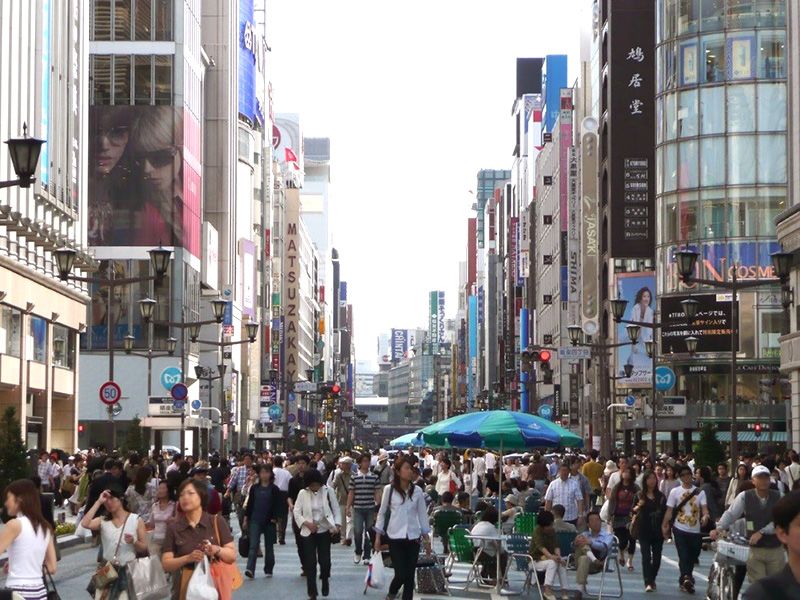