Economy Nov 5, 2013
JR Central recently announced the route and the stations for a planned linear Chūō Shinkansen, a high-speed train linking Tokyo and Nagoya in just 40 minutes. Work will begin in fiscal 2014, with the service scheduled to be operational by 2027.

Tokyo to Nagoya in Just 40 Minutes

On September 18, 2013, the Central Japan Railway Company announced the details of its plan for the linear Chūō Shinkansen, the next generation of the famous shinkansen, or “bullet train.” The new high-speed line linking Shinagawa in Tokyo with the city of Nagoya is slated to be operational by 2027; the plan includes the finalized route and the stations along the way.

Following stiff competition among local authorities keen to attract the new service, the final route will stretch for 286 kilometers in an almost straight line, of which 86% will be through tunnels. Construction will commence in fiscal 2014, and when the line is completed it will be possible to travel from Tokyo to Nagoya in just 40 minutes—the journey today takes one hour 40 minutes.

Plans call for the maglev line to be extended as far as Osaka by 2045, reducing the 438-kilometer journey between Tokyo and Osaka from 150 minutes to as little as 67 minutes. 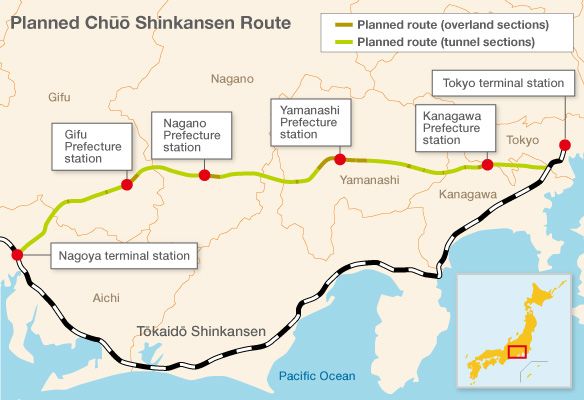 The new line utilizes a superconducting magnetic levitation (maglev) linear motor railway system. The body of the train and the track are both fitted with powerful electromagnets, and the magnetic force between them lifts the train 10 centimeters above the track and powers it forward at high speed. The maximum design speed is 505 kilometers per hour.

The Tōkaidō Shinkansen, which opened in 1964 to coincide with the Tokyo Olympic Games, became an essential element of the infrastructure that sustained the Japanese economy in the latter half of the twentieth century. Similarly, the linear Chūō Shinkansen is likely to become an important part of Japan’s railway infrastructure in the twenty-first century.

On September 25, 2013, Prime Minister Abe Shinzō, who was in the United States to attend the General Assembly of the United Nations, delivered a speech at the New York Stock Exchange. Along with unveiling his economic growth strategy, dubbed “Abenomics,” Abe lost no time in alluding to the maglev technology to extol Japan’s technological strengths. “Making use of this technology would connect New York and Washington, D.C. in less than an hour,” he stated.

However, the linear Chūō Shinkansen will not be operational for another 14 years. The full social impact and economic benefits are unknown, and there are more than a few hurdles to overcome before the service is launched.

The already enormous construction costs to be shouldered by JR Central and the various local authorities along the route could well increase further. Other concerns include profitability once the service starts and the impact on the environment.

What sort of changes will the new maglev line bring about for communities not just in Nagoya but also in areas near the stations planned along the way? How will travel patterns between Tokyo and Nagoya change? What will be the impact on the domestic airline industry? It is hard to get a clear picture of the future.

Kawamura Takashi, the mayor of Nagoya, has said that the linear Chūō Shinkansen may well pose a danger to his city: “Nagoya residents will be able to nip over to Tokyo in just 40 minutes, watch a kabuki show there, and come back home the same night.”

Japan Is Getting “Smaller”

“Japan is a small country, what’s your hurry?” That was the popular slogan of a 1973 road-safety campaign in Japan. But some may think it also relevant to the debate over the maglev line. The present-day Nozomi Shinkansen runs from Tokyo to Nagoya in 100 minutes and from Tokyo to Osaka in 150 minutes. The maglev line will cut those times by more than half—making Japan feel smaller than ever.

At the same time, the population of Japan is falling and is expected to sink below the 100-million mark by the middle of the century. It may become possible to travel from Tokyo to Nagoya in 40 minutes, but how many passengers will actually use this service?

Some people also have pointed out that the maglev line could further concentrate the population in Tokyo. And there is the question of how the new trains will stop in the case of an emergency. Will there be full preparations in place to cope with a natural disaster such as a massive earthquake? This is particularly important since major earthquakes are expected to eventually strike areas along the planned route.

A Project that Dates Back Half a Century

With such a mix of expectations and anxieties surrounding the linear maglev system, JR Central is keen to emphasize the significance of the new line and justify the massive construction costs it will entail, estimated to reach around ¥9 trillion.

The Tōkaidō Shinkansen has been a cash cow, but with schedules already tight there is little room to add more trains. Also, there has to be another route linking Tokyo, Nagoya, and Osaka in case this main arterial route is taken out by an earthquake or other natural disaster.

The plan for a maglev line dates back to 1962, two years before the Tōkaidō Shinkansen started running, when Japan National Railways engineers began research. The first successful manned levitation run was in 1972, and in 1979 the maglev achieved a speed of 517 kilometers per hour, breaking the world record. Trial runs have continued ever since at the test track in Yamanashi Prefecture. In other words, the plan for a maglev line is the fruit of half a century of tireless research.