The Evolution of the Japanese Anime Industry

Culture Dec 20, 2013
In recent years, Japanese animation has become popular around the world. Industry veteran Yamaguchi Yasuo, who has been involved in anime production for half a century, traces the history of Japanese animation, from its birth to today.

The Dawn of Japanese Anime

Japan began producing animation in 1917—still the age of silent films—through trial-and-error drawing and cutout animation techniques, based on animated shorts from France and the United States. People started talking about the high quality of Japanese “manga films.” But Japanese anime were costlier to produce than Western animations and were overshadowed by the popularity of Disney cartoons. They faced an uphill battle from the start.

One of the things that helped them find their niche was anime production for public relations and publicity campaigns by public institutions. Domestic anime production was beginning to develop a small but solid foundation when Tokyo and the surrounding area suffered catastrophic damage in the Great Kantō Earthquake in 1923. The anime industry was forced to start over from scratch.

The industry continued to struggle, unable to respond adequately to successive innovations, including the appearance of the first talkies in 1929 and color film in 1932. During this period, Ōfuji Noburō won international acclaim for Bagudajō no tōzoku (The Thief of Baguda Castle), which he made by cutting and pasting chiyogami (Japanese colored paper). His film is remembered as the first to make its presence felt outside Japan.

Many other promising anime artists appeared one after another, but with war approaching, goods were in extremely short supply as the national mood turned militaristic. Even film was not easy to get hold of. It was in this context that the first full-length theatrical film in the history of Japanese anime was released. Momotarō: Umi no shinpei (Momotarō’s Divine Sea Warriors, B&W, 74 minutes), produced by the navy, came out just before the end of the war. This was a propagandistic film designed to lift morale and commitment to the war effort.

Soon after the war ended, the General Headquarters of the Allied occupation (GHQ) brought together 100 anime artists in the bombed-out ruins of Tokyo to form the Shin Nihon Dōgasha, or New Japan Animation Company. The aim was to make it easier to spread occupation policies by having the artists produce anime in praise of democracy. However, many of the artists were fiercely independent and territorial, and the company was riven by disagreements from the outset. The project strayed off course, and eventually disbanded. Even GHQ threw in the towel. It seemed the switch from militarism to democracy was not going to be so easy.

It was during these years, as Japan began to recover from the disastrous war, that Ōkawa Hiroshi, president of the Tōei film company, saw Disney’s Snow White (1937). He was overwhelmed by the gorgeous color of the film. In 1956, he built a modern studio—a white-walled palace with air conditioning, as people called it—and founded Tōei Dōga (now Tōei Animation). His ambition: to become “the Disney of the East.” 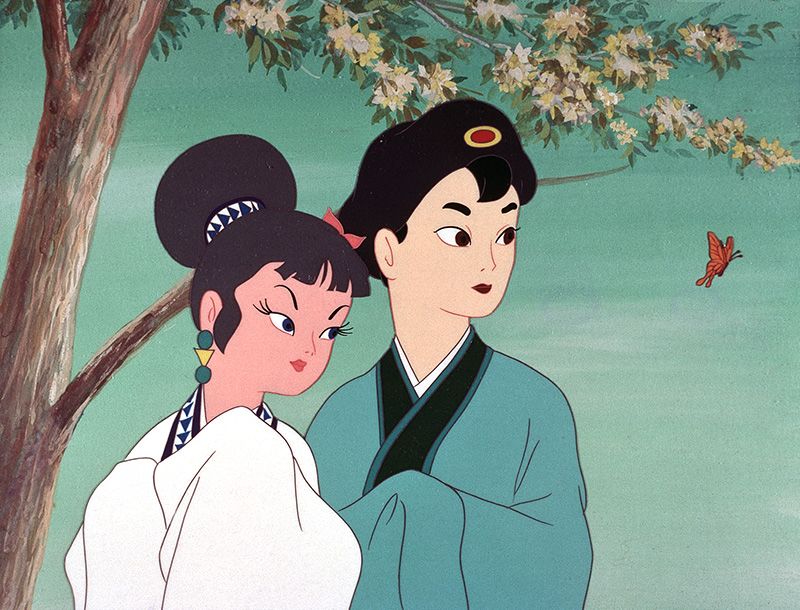 Tōei Dōga’s first full-length film, Hakujaden, was released in October 1958. It was based on a Chinese tale. Miyazaki Hayao, who saw the film during a break from studying for his college entrance exams, was astonished by its quality. © Tōei

Tōei Dōga chose Hakujaden (The Legend of the White Snake) as their first film. They sent a research team to the United States and invited several experts to travel to Japan as mentors. As a result, they were able to master the Disney system of “assembly-line production.” They hired a team of new employees who honed their skills while they produced the film under the supervision of veteran animators like Mori Yasuji and Daikuhara Akira.

With jobs hard to come by in the postwar Japan, the new company was able to attract an outstanding team of young talent happy to work for relatively low starting salaries. It was a typical labor-intensive company. However, as the government’s drive to double people’s incomes started to take effect, wages shot up and the company soon found itself in the red. Attendances at the World Masterpiece Fairy Tale Anime Series, a “manga festival” held every year during the springtime school holidays (and, in later years, during the summer vacation as well), were falling. The company’s financial future was uncertain. The labor movement was also gaining momentum, bringing frequent labor disputes and labor-management clashes. Takahata Isao and Miyazaki Hayao, now with Studio Ghibli, began their careers at Tōei Dōga (Takahata entered the company in 1959, Miyazaki in 1963). Both were active members of the labor union, Takahata serving as vice-chairman and Miyazaki as secretary-general.

On January 1, 1963, Fuji Television broadcast a 30-minute animated television series called Tetsuwan Atomu (better known in English as Astro Boy). The show became a surprise hit, starting an anime boom and a period of intense competition for TV audiences. The success marked the beginning of a new kind of anime industry.

The low franchise fees paid to the studio for Tetsuwan Atomu (created by Tezuka Osamu, the president of Mushi Production) meant that the company needed to come up with a way to drastically cut production costs. They ruthlessly cut the number of drawings, trimmed the number of lines in each image to the bare minimum, and took to using more still images. They worked to make the storylines quicker and devised clever ways of simulating movement, from sound effects to the dialogue.

The company offset its losses with copyright income—licensing the rights for the Atom character to their corporate sponsor, confectionary maker Meiji Seika, who used the character on a popular brand of chocolates. When the company still posted a loss, Tezuka decided to invest his own income from manga publishing. It was a generous gesture typical of the man they called the “god of manga.”

The Wilderness Years and the Appearance of a Blockbuster

Merchandising became entrenched as part of the basic business model for all the television anime that followed. The most popular genre dealt with science fiction and space, followed by shows about girls with magical powers. In 1968, the popular baseball-themed Kyojin no hoshi (Star of the Giants) began, followed in 1969 by the first episode of the family drama Sazae-san, which continues to this day as the longest-running series in anime history. But not every series could be a winner, and with a glut on the market competition intensified.

At Tōei Dōga, which continued to run a deficit due to high production costs, labor-management relations deteriorated, leading to a lockout and layoffs in the summer of 1972. Mushi Production went bankrupt in 1973 (although the labor union later took over from Tezuka, the founder, and has led the company until the present day). The anime industry went into recession. Behind this recession were larger economic issues, such as the Nixon Shock in 1971 and the 1973 oil crisis.

When an animated television series ended, the staff was disbanded. Tōei’s seniority-based employment system fell apart, and they switched to a system of performance-based pay. They were required to change to a corporate style that was more compatible with the shrewd programming policies of television stations.

Amidst the recessionary mood of these bleak years, a new work appeared that challenged the idea of anime as simply children’s entertainment. Uchū senkan Yamato (Space Battleship Yamato), released as a TV series in 1974 and a feature film in 1977, became a social phenomenon, tremendously popular with millions of young adults.

The Proliferation of “Japanimation” Fans

Meanwhile, Japanese television anime began to become popular among young people overseas. In some countries, adults rejected it, calling it “Japanimation” and criticizing it as cheap, violent, and sexually explicit. When Kyandi kyandi (Candy Candy) was broadcast in France, young girls were glued to the television screen. Some parents resented this, claiming their children were being corrupted by a strange culture from the Orient. Nevertheless, the anime fan base continues to grow around the world, mostly among young people. Some fans even wonder, “Why can’t our country create works that surpass Japanimation?” Today, “Japanimation” means something quite different from the negative connotations it used to have.

Although the number of television anime gradually recovered after the collapse of the bubble economy in 1992 and the economic slump of the 1990s, the industry as a whole has never recovered the pomp of its golden years. A slump in advertising revenue, dwindling birthrates, and the popularity of alternative forms of entertainment like video games and cell phones have led to sluggish prime time ratings and a decline in the number of anime since the peak in 2006. Although there are fewer anime on the main commercial stations today, other channels have remained anime-friendly: TV Tokyo chief among them, followed by local and regional stations, satellite channels, and other communication systems. Unfortunately, these smaller channels tend to have smaller budgets than the main stations, with predictable consequences for production costs.

The Japanese anime industry is at a turning point. The reality is that many anime production companies are struggling, and have become little more than subcontractors for television stations. The need to improve the status of these companies is foremost among the many issues that need to be addressed if the industry is to continue to develop new talent for the future.

(Originally published in Japanese on November 28, 2013)