The Road to Recovery: Three Years On from 3/11

Society Apr 15, 2014
Three years have passed since the widespread devastation of the Great East Japan Earthquake. How far has the nation come along its path of recovery from the earthquake, tsunami, and disaster at Fukushima Daiichi Nuclear Power Station?

On March 11 this year, exactly three years after the Great East Japan Earthquake caused unprecedented devastation across much of the northeast part of the country, a government-organized memorial service took place at the National Theater of Japan. Emperor Akihito and Empress Michiko, Prime Minister Abe Shinzō, and representatives of the families of those who lost their lives in the disaster gathered to pray for the repose of the souls of the deceased, and the prime minister gave a speech declaring his resolve to further hasten the pace of rebuilding efforts. But three years on from the earthquake and tsunami, how far has the nation come along the path to recovery?

As of March 10, 2014, according to National Police Agency figures, the disaster had caused 15,884 deaths, with 2,633 still unaccounted for. Reconstruction Agency statistics show that as of February 13, there were still 267,419 refugees unable to return to their homes—a drop of 47,000 from the previous year, but still a very high number. With 102,650 of these individuals still living in 46,275 temporary housing units across eight prefectures, it is clear that the effort to rehouse those affected is proceeding more slowly than might have been hoped.

Miyagi Prefecture in the immediate aftermath of 3/11: Kesennuma (left) saw a boat carried ashore along with the debris which buried the town. Much of Onagawa (right) was buried under mountains of rubble and detritus. (Photos: Kuyama Shiromasa)

Clearance of debris, meanwhile, is making somewhat smoother progress, with some 16.1 million tons, or 95% of the total wreckage, having been removed in the three years since the disaster. (This figure excludes contaminated waste from designated zones within Fukushima Prefecture.) In addition to this, 8.9 million tons of sediment washed ashore by the tsunami, or 94% of the total, has been successfully cleared.

Still a Long Way to Go

Unfortunately, when it comes to the recovery of local businesses the picture is less encouraging. A September 2013 survey conducted by the Tōhoku Bureau of Economy, Trade, and Industry identified some sectors in which the turnover of respondent businesses was getting closer to pre-3/11 levels (most notably construction and haulage, at 66% and 42.3% of predisaster takings, respectively). Some other types of business are not faring so well, though. The food and fisheries sector, a traditional Tōhoku mainstay, had only seen a 14% recovery, and the combined turnover of businesses in the wholesale, retail, and service sectors was also languishing at 30.6% of takings before the disaster. The area also faces continuing problems arising from the damage to local business facilities, as well as the post-3/11 population drain.

This is especially the case in Fukushima Prefecture, which lags behind Miyagi and Iwate to the north in terms of recovery, mainly due to the evacuation and exclusion zones imposed in the aftermath of the nuclear disaster. To restore some stability to the lives of the evacuees and other victims from the area, concerted efforts are underway to prepare permanent “restoration housing” complexes. But there is still much to do to restore normality to the lives of those affected. 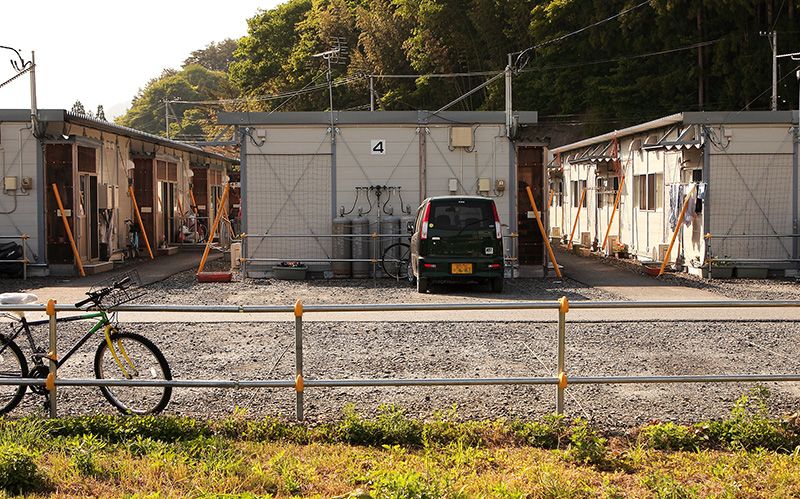 Keeping the Focus on the North

At a March 10 press conference held in advance of the anniversary, Prime Minister Abe declared the national government would further increase the pace of recovery in the affected areas, stressing: “There can be no revitalization of Japan without recovery in Tōhoku.” He also touched on the goal of making the 2020 Tokyo Olympics and Paralympics an opportunity to let the world see how fully the Tōhoku area has bounced back.

The prime minister also spoke of making the year ahead one in which the residents of the affected areas would “feel the recovery,” pledging relocation of communities in 200 areas to higher ground and the completion of a further 10,000 “restoration housing” units for evacuees. In Fukushima, where recovery has been severely hampered by the nuclear disaster, Abe announced accelerated measures to deal with contaminated water from the site and to boost the prefecture’s postdisaster infrastructure through such steps as the full reopening of the Jōban Expressway.

The following tables are based on data released by the Reconstruction Agency, the National Police Agency, the Ministry of the Environment, and local authorities in Iwate, Miyagi and Fukushima Prefectures.)

Individuals Displaced by the Disaster

With the exception of parts of Fukushima Prefecture, disposal of all debris is projected to be completed by the end of March 2014. In Fukushima (excepting evacuation zones), the goal is to move all debris to temporary storage locations within fiscal 2013 (ending March 2014) and safely disposed of as soon as possible within fiscal 2014.

Latest Figures on Clearance of Debris

Note: Data for disposal of debris in coastal municipalities.

Areas other than Fukushima Prefecture (End of Dec. 2013)

Notes: Data from Ministry of the Environment, except for Fukushima data, obtained from the Fukushima Prefectural Government.

Notes: Figures are for total land areas engaged in paddy-field rice cultivation, based on 2013 data for rice yields in the Tōhoku region.

Notes: Recorded catches are those landed at key fish markets in Iwate, Miyagi, and Fukushima Prefectures from November 2012 to October 2013. Damaged processing plants were in three disaster-hit prefectures; reopening figure is as of the end of September 2013.

Recovery and Reconstruction of Municipal Infrastructure

Note: Percentages are of total proposed projects as of the end of November 2013.

Notes: Work on community infrastructure, including water and sewer systems and medical and educational facilities, is more than 90% complete. In the area of housing, though, just 61% of proposed “restoration housing” projects are under construction, and only 2% are complete. For projects to relocate communities en masse to safer ground, construction has begun on 64% of the proposed projects and just 5% are finished.