Society Lifestyle May 14, 2014
On May 12, with exactly one month to go until the June kickoff of this year’s soccer World Cup, Japan coach Alberto Zaccheroni announced the names of the 23 players who will be joining him on the plane to Brazil. Here we outline the squad and discuss the national team’s recent form, tactics, and key players.

At a May 12 press conference in Tokyo, the Italian coach of Japan’s national soccer team, Alberto Zaccheroni, announced the 23-man Japan squad for this summer’s World Cup in Brazil. The team consists of three goalkeepers, eight defenders, four midfielders, and eight forwards (although several of the players officially listed as forwards are better known as attacking midfielders). The majority of the players selected were heavily involved in the qualifying campaign, as well as the 2011 Asia Cup. But two surprise inclusions were veteran striker Ōkubo Yoshito, who is enjoying something of an Indian summer at Kawasaki Frontale this season, and Saitō Manabu, the tricky young Yokohama F Marinos forward whose dribbling skills could be a key to unlocking defenses.

Zaccheroni insisted that the team’s ethos would be to take the initiative and for the players to play their own soccer rather than trying to tailor tactics to match specific opponents. He also remarked that he had selected players with a view to showing how far Japanese soccer has come in recent years.

The opening group stage of the tournament kicks off on June 12 with the opening match between host Brazil and Group A rival Croatia. Japan will compete in Group C, alongside the Ivory Coast, Greece, and Colombia.

Four-Man Defense the Recipe for Success? 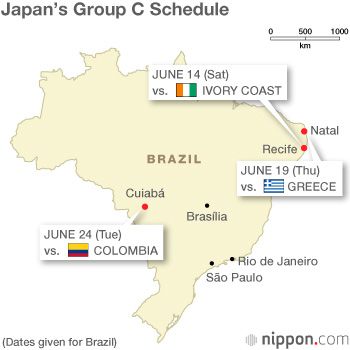 (Click here to confirm kick-off times where you are.)

Zaccheroni took over the Japan national team in August 2010. In the 50 matches for which he has been at the helm, the team has compiled a record of 28 wins, 11 losses, and 11 draws. A victorious Asia Cup campaign in 2011 was followed by a smooth ride in the Asian qualifying tournament for the 2014 World Cup, as Japan emerged as the dominant force in Asian soccer. In late 2013, having already secured World Cup qualification, the team made two trips to Europe for a series of friendly matches. A disappointing first foray in October brought successive losses to Belarus (1–0) and Serbia (2–0), raising questions about Zaccheroni’s stewardship. But November’s friendlies proved more encouraging, as Japan played well in a 2–2 draw against a strong Netherlands side and followed this up by coming from behind to triumph 3–2 over Belgium.

Although the squad has now been decided, Japan’s preferred formation for the upcoming tournament is still unclear. Zaccheroni experimented in World Cup qualifying play with an attacking 3-4-3 formation, but the desired results were not forthcoming, and he reshuffled the team to a more solid 4-2-3-1 for the matches against Holland and Belgium. If this is the formation that the coach favors for the World Cup, the starting team is expected to line up as follows: 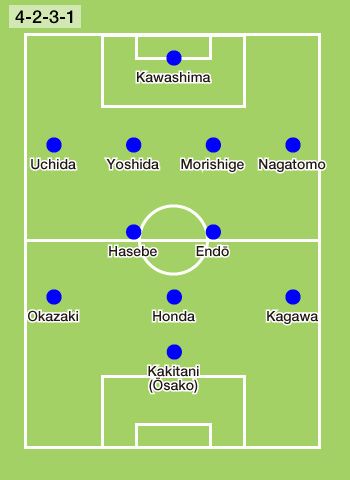 At the heart of the team is the mercurial talent of Honda Keisuke, who this season signed for Italian powerhouse AC Milan and who shares dead-ball responsibilities with Endō Yasuhito. Fans across the nation will be hoping that the man known as “Zac” can find the best combination to bring Japan’s talented young players success this summer.