Hot and Getting Hotter

Society Lifestyle Aug 7, 2014
On August 12, 2013, the city of Shimanto in Kōchi Prefecture recorded a temperature of 41.0°C, a new high for Japan. As the country heats up, temperatures are rising most rapidly in major cities; the capital Tokyo has seen a three-degree increase over the past century.

The temperature in Japan is rising significantly faster than the global average. The Japan Meteorological Agency’s 2012 Climate Change Report notes that, while the worldwide annual average temperature rose by 0.68°C over the past century, Japan’s average temperature climbed, though not always steadily, by 1.15°C in the same period.

The JMA selected 17 locations nationwide that were relatively unaffected by urbanization, ranging from the city of Obihiro in Hokkaidō to the north and the island of Ishigaki in Okinawa in the south, and examined the changes in their average temperatures. Averaging the results, the agency found that over the past 100 years temperatures had risen by 1.15°C in winter, 1.30°C in spring, 1.02°C in summer, and 1.17°C in autumn.

The following table gives temperatures for Japan’s major cities. The increases have been greater in these metropolises, where factors like the “heat island” phenomenon have combined with general global warming to push temperatures up. The figures reveal that winter temperatures have risen more than summer temperatures over the century. Tokyo has experienced the greatest overall rise, noticeably ahead of other cities at 3.0°C.

Created by Nippon.com based on data from JMA, the Ministry of Land, Infrastructure, Transport, and Tourism and other sources.

The JMA has adopted a set of terms identifying especially hot and cold days, as presented in the list below.

According to data from the Tokyo Metropolitan Government and other sources, the number of “midsummer days” as defined by the JMA, with highs of 30°C or above, has been rising in Tokyo in recent years. The annual average for the capital used to be 48.5 days, but in the 10 years from 2004 to 2013, only the relatively cool summers of 2006 and 2009 fell below this figure, and in 2010, there were a record 71 such days. Another indicator of summer heat is the number of “tropical nights,” with temperatures never dipping below 25°C. There were only 15 such nights a year in Tokyo on average in the 1970s, but in recent years the number has soared to over 40.

Meanwhile, the number of “winter days,” when the temperature falls below freezing, has plummeted over the past 50 years. In the 1960s there were around 30 such days a year on average in Tokyo, with some annual totals exceeding 40, but it is now exceedingly rare to have more than 10. The JMA reports that there were no sub-zero temperatures at all in Tokyo in the winters of 2003–4, 2006–7, and 2008–9.

The upsurge in summer heatstroke cases caused by higher temperatures is a major issue for Japan’s cities. Some studies have found a correlation between deaths caused by heatstroke and the numbers of midsummer days and tropical nights in a summer. In Tokyo, there were 4,517 cases of heatstroke in 2013, which is more than 10 times as many as the 412 cases in 2000. Approximately 40% of patients requiring ambulances due to heatstroke were hospitalized, according to the Ministry of Internal Affairs and Communications’ Fire and Disaster Management Agency. Around 40% of the ambulance patients were over 65 and around 10% were under 18.

The heat island phenomenon that makes city centers swelter is caused by various factors, such as the increase in waste heat from air conditioning and cars, the high concentration of buildings, and the replacement of greenery by artificial surfaces. It affects temperatures all year round, but is particularly problematic in its intensification of urban discomfort in summer. Meanwhile, asphalt roads, which absorb heat in the daytime and release it at night, keep temperatures from falling, thereby contributing to the increase in the number of tropical nights.

Japan’s Record Temperatures (as of July 2014) 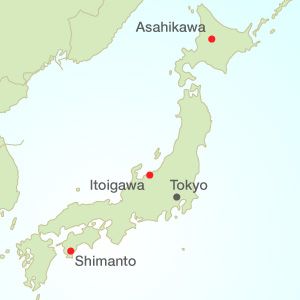 On August 11, 2013, Tokyo had the second-highest daily minimum temperature recorded in Japan, at 30.4°C. Thermometers registered 30.9°C at dawn, reached 38.3°C during the day (the fifth-highest daytime maximum for the capital), and never dropped below 30°C even after night fell. As noted above, the JMA defines nights when the temperature stays above 25°C as nettaiya, or tropical nights; what Tokyo experienced on that sweltering occasion might be dubbed a chō nettaiya, or “super tropical night.”

(Originally written in Japanese. Banner photo shows a child wiping sweat away in the intense heat of Kumagaya, Saitama Prefecture, on August 10, 2013. © Jiji)