Society Oct 29, 2014
Japan is seeing its population age faster than any other country in the world. Projections indicate that by 2060 there will be just 1.3 workers for every senior citizen, increasing the burden on the working-age population. This article traces the figures behind the graying of Japan.

In August 2014, Saitama resident Momoi Sakari was confirmed as the world’s oldest living man by Guinness World Records at the age of 111 years and 196 days. Checking procedures began in June after the death of Alexander Imich, the American who was the previous record holder, at 111 years and 124 days.

Shortly before September 15, the national holiday Respect for the Aged Day, the Ministry of Health, Labor, and Welfare announced a new record population of 58,820 centenarians. This was a rise of more than 4,000 on the previous year and the forty-fourth consecutive annual increase. Japan’s oldest woman was 116-year-old Ōkawa Misao of Osaka, the world’s oldest living person, and Japan’s oldest man was Momoi. The ministry’s report gave further corroboration of the rapid aging of society.

Life Expectancy for Men Now Over 80

Female life expectancy rose 0.2 to a new record of 86.61, the world’s highest for the second year running, ahead of Hong Kong (86.6), Spain (85.1), France (85.0), and Switzerland (84.7). One reason behind these increases is lower mortality at all ages from diseases such as cancer, heart disease, strokes and other cerebrovascular disease, and pneumonia.

The World Health Organization recognizes aging societies as a global trend, with world life expectancy in 2012 at 72.7 for women and 68.1 for men, six years longer than in 1990. However, longevity still depends greatly on where a person is born, with economic factors playing a major part.

The aging of Japanese society has already reached a level beyond that of any other country, but it is the speed of the process that is particularly worth noting. The United Nations defines a country as aging when 7% of its population is 65 or over. In Japanese there are terms for a society including 7% (kōreika shakai, or a society in the process of aging), 14% (kōrei shakai, an aged society), and 20% (chōkōrei shakai, a super-aged society) senior citizens. Japan moved from 7% to 14% in the short span of 24 years between 1970 and 1994. By contrast, in Europe this stage was quickest in Germany, where it took 42 years from 1930 to 1972, while in France it took all of 114 years, from 1865 to 1979.

The senior population is predicted to continue to grow and peak at 38.8 million in 2042, according to the Population Projections for Japan prepared by the National Institute of Population and Social Security Research in January 2012. It will then start to decline, but the proportion of senior citizens will continue to grow. As a result, this proportion is projected to reach 39.9% by 2060, at which time the 75-or-over population will be 26.9%. Life expectancy is predicted to be 84.19 for males and 90.93 for females.

As Japan’s birth rate continues to drop, one concern is the shrinking working-age population. The Ministry of Internal Affairs and Communications estimated that the working population would total 79.0 million in 2013, falling below 80 million for the first time in 32 years. A smaller labor force will surely reduce Japan’s international competitiveness. It will also face a higher relative burden, as the 2.3 workers supporting every senior via social security payments in 2015 are projected to drop to 1.3 by 2060. Discontent is growing among the younger generation and there are fears this could develop into a serious social problem.

Another issue is the cost of social security, which in fiscal 2011 reached a record ¥107.5 trillion. In 1970, payouts represented just 5.8% of the national income. By 2011, though, they had ballooned to 31.0%, with more than two-thirds (¥72.2 trillion) spent on senior-related social security. The country’s inflating welfare bill comes at a time when it urgently needs to reduce its fiscal deficit.

Japan will break new ground as a nation with a never-before experienced life expectancy and senior population. It will have to meet the challenges of a greater number of people with Alzheimer’s disease and other forms of dementia, leading to expansion in “silver” industries like medical and nursing care for seniors. The national government and local administrations are setting targets and implementing new initiatives to help ensure that long lives can be lived in good health. With no models from other countries to refer to, it remains to be seen how Japan’s “super-aged society” will develop. 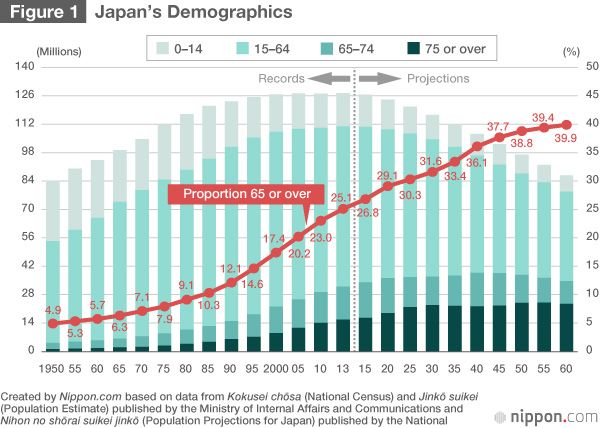 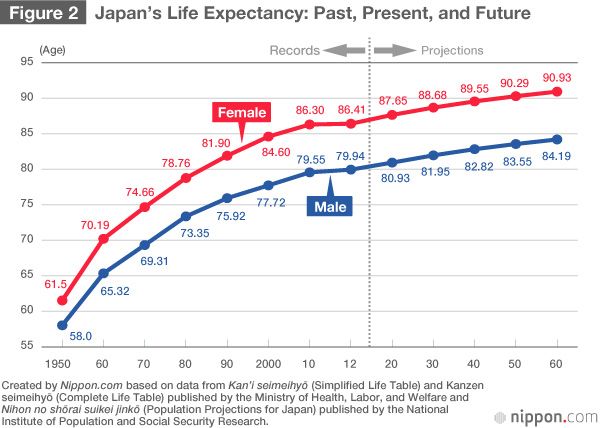 Notes: Data as of October 1, 2013. Created by Nippon.com based on data from Jinkō suikei (Population Estimate) published by the Ministry of Internal Affairs and Communications.