Can Japan Boost Its Low Birthrate?

Politics Society Dec 25, 2014
Japan, like many other countries, has a declining birthrate that is likely to result in a host of socioeconomic problems. The Japanese government hopes to create a social environment that will raise the country’s total fertility rate.

Among the various economic forecasts for Japan, the one statistical factor that seems more or less certain is the nation’s population outlook. The population projection of the National Institute of Population and Social Security Research, based on surveys including the census the government conducts every five years, found that the overall Japanese population peaked in 2010, at 128 million, and has been decreasing ever since. According to the institute’s projections, by 2040 the population will be 107.2 million—more than 20 million lower than the current level. Calculations by the Ministry of Land, Infrastructure, Transport, and Tourism predict an even bigger decrease, estimating that the population will have slipped below the 100 million mark by 2050, to 97 million.

The impact of this fall in population threatens society a variety of ways, even in the shorter term. The shrinking of the productive stratum of the population, spanning the age of 15 to 64, will lower potential growth and shrink Japan’s GDP. This also raises the danger that it will be difficult to sustain the pension system and other elements of social welfare system, thereby bringing down the nation’s standard of living. According to some reports, the depopulation and declining birthrate in rural areas may put in danger the very existence of some municipalities.

The key to countering the population trend will be to improve the birthrate. As of 2013, Japan’s “total fertility rate,” which indicates the average number of children born to a woman over her lifetime, was 1.43.(*1) (This article uses “birthrate” to refer to this statistic.) This is below the 2.07 to 2.08 children necessary to maintain the population, also known as “replacement-level fertility.”(*2) Anything below that level is calculated to bring about a population decrease.

Looking at changes in the Japanese birthrate since the end of World War II, it is clear that the trend has been toward a steady decline. The graph below shows that a striking change occurred suddenly in 1966—the point marked 1.58. That year saw a 25% decrease compared to the previous year. This was related to the fact that 1966 was designated the “Year of the Fiery Horse.”(*3) An old Japanese superstition states that every 60 years the Year of the Horse brings bad luck in marriage to girls born that year. And that year did indeed deal a savage blow to Japan’s birthrate. 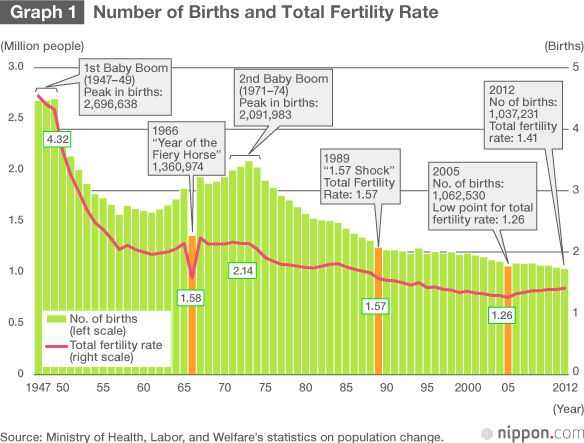 Experts became even more alarmed by the population problem in 1989, however, when the birthrate fell to 1.57, below the 1966 level. This came to be known in Japan as the “1.57 shock.” And from that year the rate continued to decline until reaching the historic low of 1.26 in 2005. Since then there were some improvements at times, but the low birthrate trend has not been fundamentally reversed.

Various factors underlie the declining birthrate. The Ministry of Health, Labor, and Welfare has pointed to such factors as the rising cost of childbirth and child-raising, as well as the expanding participation of women in the workforce following the enactment in 1986 of the Equal Opportunity in Employment Act. Generally speaking, the falling birthrate is the outcome of a complex array of factors that also include the later average age of marriage as well as the increasing number of unmarried; the higher educational level of women; economic stagnation; and changes in the housing environment and in social customs. Measures have been introduced to improve the birthrate, but it has been difficult to find fundamental ways to resolve the problem.

France: A Model of Success

How does the birthrate in Japan compare to the rate in other countries? The MHLW compared Japan’s rate to six other countries, including the United States, France, and Britain. The study found that all six countries had a birthrate above 2.0 through the end of the 1960s, but thereafter, in the 1970s and 1980s, the rate declined overall, against the backdrop of such factors as the increasing cost of raising children, changing values with regard to marriage and childbirth, and the spread of contraception.

But from the 1990s, birthrate trends among the six countries varied. Some saw improvements. France and Sweden in particular, which had seen their respective birthrates fall to around 1.6, reversed that trend so that by 2011 the rate was 2.01 in France and 1.90 in Sweden.

France has been the focus of attention worldwide as an example of a country that has introduced policies that have successfully improved the birthrate. Along with offering families benefits that become increasingly advantageous as the size of the family increases, France has strengthened policies that make it easier to balance work and family by enhancing nursery schools and putting in place an environment that offers parents more choices with regard to the relationship between employment and childbirth and child-raising.

Since the latter half of the 1980s, France has also seen a rapid increase in the number of children born outside marriage due to the growing social recognition of couples who were not legally married. In 1970, children born outside marriage accounted for 6% of all births, whereas that percentage had increased to 52% by 2008. This situation where half of all children are born outside of marriage reflects the changes in the law in France and the new view of the family that has emerged. This contrasts sharply with the situation in Japan. 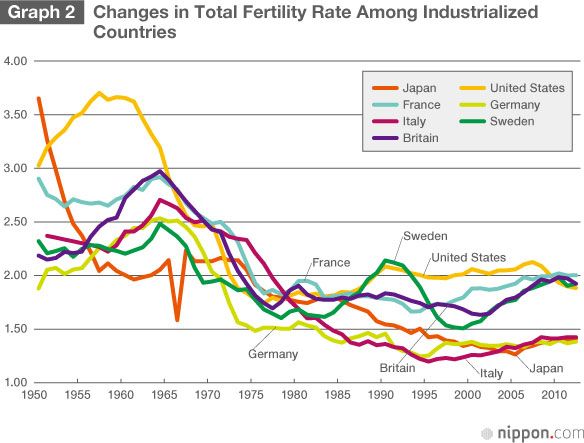 Turning to Asia, we can see that in such places as Thailand, Singapore, South Korea, Hong Kong, and Taiwan, the birthrates were all higher than the level of Japan around 1970, but since then the rates have steadily decreased to the point where today they are below the population replacement level. With the exception of Thailand, whose birthrate was 1.60 as of 2010, all of the other places had birthrates that were lower than the 1.39 rate in Japan as of 2011: 1.20 in Singapore, 1.24 in South Korea, 1.07 in Taiwan, and 1.20 in Hong Kong.

Improving the birthrate is not something that can be done overnight. In the autumn of 2014, the administration of Prime Minister Abe Shinzō announced its long-term vision and strategy for the Headquarters for Vitalizing Towns, People, and Jobs in order to curb the decrease in population. The long-term vision maps out a future vision for Japan to be able to maintain its population at around 100 million even up to 2060. The plan clearly indicates the goal of raising the birthrate to around the level of 1.80.

The diversity of values has increased among the younger generation in Japan as the country has grown more prosperous, but still there are many who would like to get married and start a family. The headquarters established by the government seeks to put in place a structure to provide ongoing support to young people with regard to employment, marriage, and child-raising, based on the recognition that the most effective way to curb the population drop is to improve the birthrate as soon as possible. One hopes that effective policies will be put in place that can lead to that recovery.

(*3) ^ The “Year of the Fiery Horse,” or hinoeuma in Japanese, occurs once every 60 years for the Year of the Horse in the Chinese 12-animal zodiac. A superstition dating back to the Edo period (1603–1868) states that girls born that year will have a harsh temperament that shortens the lives of their husbands.