Economy Society Culture Jan 21, 2015
The Japanese publishing industry is staring into the abyss as sales continue to plummet. Can the nation’s vaunted tradition of literature and literacy survive in the age of nonprint media?

Perhaps the easiest way to convey the dire situation facing the Japanese publishing industry is with a simple line graph. Figure 1 below charts domestic sales of books and magazines over the past three decades, from 1981 to 2013. 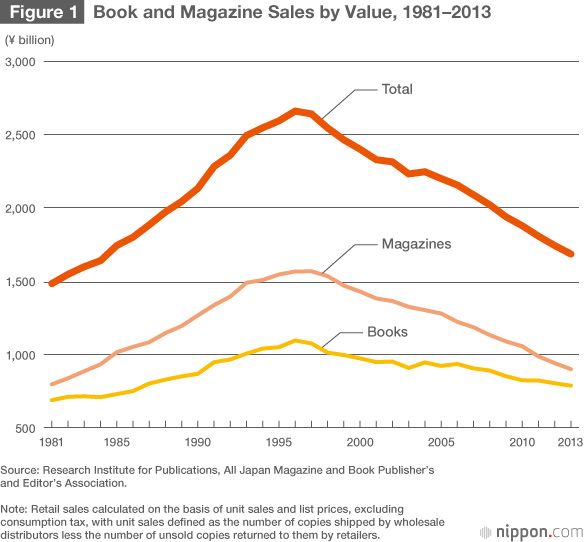 This is an industry that enjoyed uninterrupted expansion up through the mid-1990s. Sales of books and magazines soared during the era of rapid economic growth in the 1960s and continued to climb after the oil crises of the 1970s ushered in an era of slower growth. Japanese publishers even shrugged off the collapse of the 1980s’ asset bubble, with aggregate retail sales topping ¥2.65 trillion in 1996. By that time, the market had grown 28-fold since 1960, near the start of the rapid-growth era. Moreover, not once in all those years did the industry experience a year-on-year drop in revenue.

However, 1996 marked the industry’s apogee and the beginning of a long and steep decline. Over the next 17 years annual sales fell by 36%, dropping to ¥1.68 trillion in 2013. The available monthly figures for 2014 also indicate a year-on-year drop, making a further annual contraction certain. Publishing revenues have sunk to where they stood in the mid-1980s, and they show no sign of bottoming out anytime soon.

The situation is particularly dire in magazine publishing. While book sales have dropped 28% since their peak in 1996, sales of magazines have plunged 42%, falling each year since 1998. Advertising revenue, the other key source of income for magazine publishers, mirrors this trend. The current state of magazine publishing might best be described as an industry meltdown.

There has been no lack of commentary on the causes of the crisis facing the Japanese publishing industry, most of it focusing on two factors: economic trends and the phenomenon referred to as moji-banare—Japanese consumers’ alleged “flight from the written word.” Let us begin by reviewing these factors and their role.

The impact of economic stagnation over the past two decades has been felt in virtually every business sector, and it would be wrong to suggest that publishing has been unaffected. But Japan’s extended business slump is just one small part of the picture. After all, magazine and book sales continued to climb for some time after the bubble burst, plunging Japan into recession. The industry’s decline began in 1997 and accelerated in 1998. While it is true that economic growth plunged to a new low in 1998 as a result of the East Asian financial crisis and a domestic credit crunch, the publishing industry’s downward spiral continued unabated thereafter, even as the economy regained its footing. Clearly, there were other factors at work.

In fact, the mid-1990s was a turning point for all of Japan’s information industries. For one thing, 1995 was the year that the nation’s working-age population began to shrink. No discussion of consumption patterns can ignore trends in disposable income. If the income-earning population shrinks, it is bound to have some impact on sales of nonessential items, including books and magazines. That said, the 9.5% decline in the working-age population is insufficient to account for the precipitous drop in book and magazine sales between 1995 and 2013.

A more critical development during this period was the rise of new information and communication technology. The release of Windows 95 played a pivotal role in disseminating Internet use around the globe, Japan included. The appearance of Sony’s first PlayStation video game console in 1994 precipitated a similar boom in home gaming. Cell phones spread rapidly during the 1990s, and the launch of NTT DoCoMo’s i-mode in 1999 heralded the age of widespread mobile Internet access. In the years that followed, mobile computing developed rapidly, culminating in today’s ubiquitous smartphones. These new media began gobbling up more and more of the leisure time that the Japanese had formerly devoted to reading books and magazines. In a survey on attitudes toward the Japanese language conducted periodically by the Agency for Cultural Affairs, the portion of respondents who reported reading less than one book per month rose from 37.6% in 2002 to 46.1% in 2008 and hit 47.5% in 2013. And there is no question that the jump in computer and smartphone use has hurt magazines from the standpoint of both circulation and advertising.

Faced with this reality, people in the publishing business here are apt to characterize the decline of their industry as the inevitable result of moji-banare. But perhaps the extraordinary free fall of Japanese book and magazine publishing over the past 15 years calls for a bit more soul-searching on the industry’s part.

To start with, the term moji-banare is somewhat misleading. The Japanese may not be reading much printed material, but they still depend heavily on the written word to receive and send information via computers, smartphones, and other electronic devices. It is hard to believe that books and magazines have completely lost their value as media for the recording and transmission of information. But if not, how do we explain their precipitous and ongoing decline?

In Japan, the Taishō era (1912–26) witnessed a rapid expansion of publishing that has been likened to the Big Bang. The economic bubble fueled by World War I and the impact of a modern education system combined to create a burgeoning market for magazines, collected literary works, and other publications oriented to the general public. The publishing boom was an integral aspect of Taishō society, with its emphasis on democratic values and liberal education.

After the Meiji Restoration of 1868, the government established a system of education with the aim of cultivating and spreading the knowledge needed to modernize the nation. At the summit of this system were the universities, charged with translating and disseminating Western learning. In the context of modernization, education became the essential key to advancement, and social ambition reinforced a passion for learning among the Japanese people. But the path to education was not open to all. The publication of books and magazines helped to narrow the gap between the educational haves and have-nots.

As modernization progressed and the economy developed, opportunities for higher education gradually expanded. Still, the university remained the summit of intellectual achievement, and books and magazines maintained their authority and prestige among the Japanese as intermediaries between academia and the rest of Japanese society. Moreover, since information on any given topic was available to consumers only in a limited variety of packages, it was a seller’s market in every sense of the word.

After World War II, higher education spread rapidly among the Japanese until the 1970s, when the rate of enrollment in four-year universities topped out. For men in particular, graduation from a prestigious university was an indispensable ticket to the kind of stable white-collar employment that most Japanese wished for themselves and their children. But opportunities for stable white-collar work contracted sharply after the collapse of the bubble economy, and the perceived value of a university education declined accordingly. This change in attitude toward the universities as top-down purveyors of knowledge affected the publishing industry as well. In retrospect, it seems fair to say that the unchallenged leverage previously enjoyed by the supply side of the information industry reflected the nature of knowledge and education in a developing society.

The rise of the Internet completed the transformation of knowledge and information by revolutionizing the structure of supply and consumption. As archiving capacities and search capabilities rose by leaps and bounds, leverage shifted to the demand side of the market.

Yet amid this upheaval, the structure of the nation’s publishing industry has remained essentially unchanged. Instead of responding continuously and interactively to consumer demand, like the providers of Internet content, the publishing industry just sends the same old products out into the market. This observation applies to writers as well as publishers. The static nature of the publishing industry is evident not only in the form and content of its publications but also in its remarkably constant pool of writers.

One major reason for this failure to adapt is the deeply entrenched structure of the Japanese publishing industry. In Japan, a few large wholesalers distribute the bulk of new book titles to retailers on consignment. Publishers post sales as soon as they ship copies of a new title to the wholesalers, but retailers can return the copies they are unable to sell within a certain period of time, paying only for the copies sold. In the meantime, the wholesalers are essentially extending credit. However, as long as publishers keep putting out new titles, they can maintain their cash flow, even if they fail to turn a profit. The system keeps a large number of tiny operations afloat, in many cases borrowing against future income. It also fosters an emphasis on quantity at the expense of quality.

The number of titles published in Japan has risen sharply over the past few decades, a trend that continued even as sales plummeted from the late 1990s on (figure 2). Publishers are caught in a vicious circle, pumping out more and more titles to cover their losses. This is one factor that has inhibited any major shift to new content. 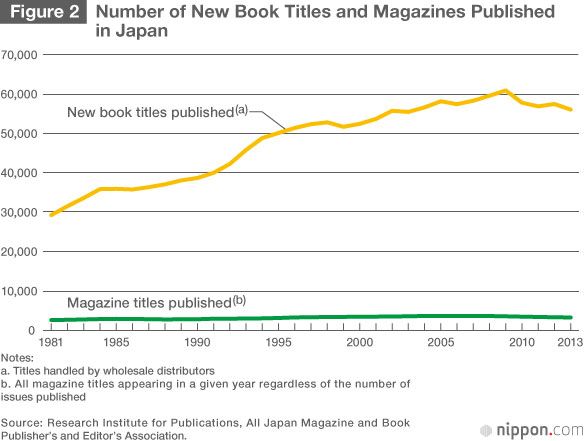 The Japanese book and magazine publishing industry is a house of cards, borne aloft by a creaky edifice of overproduction that substitutes quantity for quality. This strategy has allowed publishers to continue on borrowed time, providing information in accordance with an outdated knowledge paradigm. But the price the industry has paid to stay afloat in the short term is the creativity and flexibility it ultimately needs to adapt to our rapidly changing world.