The Capital Punishment Debate in Japan

The Cabinet Office of Japan has conducted regular surveys on capital punishment since 1965, including every five years since 1989. The most recent survey was conducted in November 2014. The results, based on the 60.9% of responses received from the 3,000 adults surveyed, showed relatively little change in the very high overall support in Japan for the death penalty. It found that 80.3% of respondents were comfortable with the continuation of the death penalty, and only 9.7% supported abolishing capital punishment in Japan.

The survey delved into the reasons for respondents’ views on the death penalty. A plurality of those who wished to see the death penalty abolished indicated that they were concerned about errors in the legal process and wrongful conviction (46.6%), a significant problem given the irreversible nature of the sentence once carried out. Almost a third of them (31.6%) thought the use of the death penalty was unsavory and inhumane, even for convicted murders. A further 29.2% of the respondents thought that there would be no risk of heinous crimes increasing due to abolition of the death penalty. And 28.7% believed that because even the most brutal criminals could be rehabilitated, this justified avoiding the use of the ultimate punishment.

For the 80.3% of respondents who were comfortable with the death penalty, two particular reasons given stand out. A majority of respondents indicated that if the death penalty were abolished, then the families of the victims of heinous crimes would not get emotional closure (53.4%). A further 52.9% indicated simply that perpetrators of atrocious crimes should pay their moral debts with their lives.

Given these results and general public attitudes, the Ministry of Justice takes the position that the death penalty should not be abolished in Japan. Because of this stance, the Japanese government has neither signed nor ratified the second optional protocol to the International Covenant on Civil and Political Rights. This protocol was adopted in a 1989 United Nations General Assembly resolution and commits signatory nations to abolish the death penalty except in certain wartime situations.

There has been debate and political activism promoting the abolition of the death penalty in Japan, however. In 1994, a cross-party parliamentarians group was inaugurated to promote the abolition of capital punishment. The chairman of this parliamentary league is independent lawmaker and former National Police Agency official Kamei Shizuka, who has long been a vocal opponent of executions in Japan. As an alternative to the death penalty, this league has worked toward promoting the implementation of a lifelong incarceration penalty—which would not allow for parole, as all current imprisonment options do—to be applied to serious crimes.

Societal sentiments in Japan work against such activism, however. In particular, opinions that emphasize the rights of victims and the feelings of victims' relatives in the punitive process have attracted support since the start of this century. While there has been a consistent reduction in the number of crimes in Japan, as well as a reduction in the murder rate to the lowest ever level, the media coverage of heinous crimes, such as the murder of children, has frequently shaken Japanese society. This has led to increased public concern about such crimes and the maintenance of high levels of support for severe punishments like execution.

The debate over the merits of the death penalty in any nation is bound up with various intrinsic religious, philosophical, and cultural attitudes. It is a complex and heavy subject, and forces in favor of and against abolition have battled over various aspects of the debate for hundreds of years. Indeed, there have been calls for the reinstitution of the death penalty even in countries where the death penalty has already been abolished. This in turn has elicited a strong pushback against such developments.

In Japan there is a profound divide between those in favor of and opposed to abolition. There are diverging perspectives on theories relating to life and punishment even among legal scholars and experts. The table below presents major elements of the domestic debate in Japan, organizing the arguments put forward by the sides in favor of and against abolishing the death penalty. It sets forth the fundamental differences in thinking and philosophy regarding the penalty and policies pertaining to the treatment of convicted felons in the Japanese context.

A Split with the European Position

What are the recent international developments regarding the death penalty? According to a report released in 2014 by international human rights watchdog Amnesty International, 98 countries had completely abolished the death penalty as of 2013. This is an increase of 13 countries (up from 85) compared to 10 years ago. In addition, the number of nations actually carrying out executions decreased slightly from 25 to 22 during the same time frame.

The implementation and presence of the death penalty varies regionally and by each nation, but we can discern some general features by reference to the Amnesty International report.

There are no executions carried out in Europe or in Central Asia. Among the 54 African Union nations, only 5 nations carry out executions (including Botswana, Nigeria, and Sudan), while 37 nations have legally or effectively abolished the death penalty. Among the 21 nations of the Arab League, 7 nations carry out executions (including Iraq, Kuwait, and Saudi Arabia). Among the 10 members of the Association of Southeast Asian Nations, Indonesia, Malaysia, and Vietnam use the death penalty. Globally, there are no executions in 173 of the 193 member countries of the United Nations. 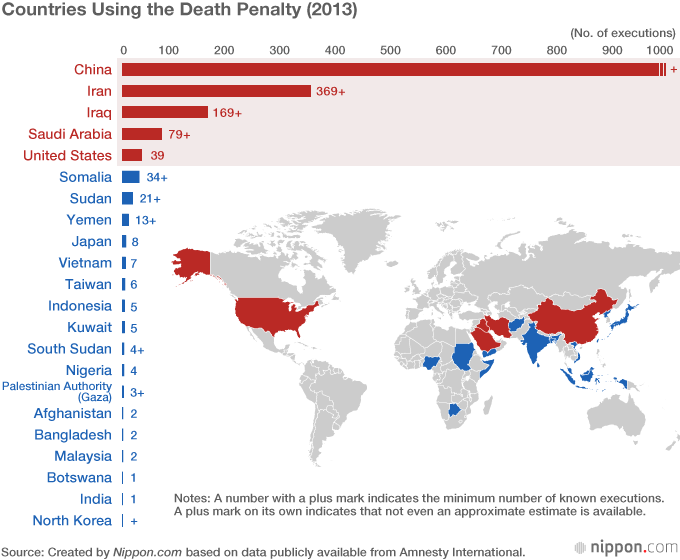 A number of nations, including China, Vietnam, and Belarus, treat the number of executions carried out as a state secret. Although it is estimated that thousands of executions are carried out in China each year, Amnesty International has not published the figures for China since 2009. Furthermore, it is increasingly impossible to get accurate information for some nations due to state regulations or political unrest (including Egypt, Malaysia, North Korea, and Syria).

Aside from in nations like Japan and the United States, where transparency laws mandate the public release of such information, getting accurate data on the number of death penalty sentences, executions, and prisoners on death row can be very difficult. Because of this, the United Nations and other concerned organizations can only estimate the number of executions.

(Originally written in Japanese by Harada Kazuyoshi of the Nippon.com editorial department and published on March 5, 2015. Banner photo: Supporters gather at JR Hamamatsu Station on May 27, 2014, to welcome Hakamada Iwao back to Hamamatsu for the first time in 48 years since his 1966 arrest. Hakamada did not waver in asserting his innocence despite the death penalty being applied to his conviction for arson, robbery, and murder. In March, 2014, Hakamada had his execution and detention suspended pending a retrial. He was subsequently released from prison. © Jiji.)