Politics Society May 19, 2015
Few nations are as generous as Japan in financing international relief efforts for persons displaced by war, civil strife, and natural disasters. Conversely, few nations are as miserly as Japan in providing physical asylum to refugees. Resolving this incongruity is a central issue for Japan in shaping a viable refugee policy.

A Swelling Population of Refugees

The office of the United Nations High Commissioner for Refugees estimates that the number of refugees worldwide reached 51 million in 2013. That was the largest number since the end of World War II.

War and civil strife account for most of the collective exodus. To cite but one troubled region, aggression by Daesh, the self-described Islamic State, and other radical groups has displaced millions of Syrians and Iraqis. Most of the refugees seek asylum in neighboring nations, such as Lebanon, Jordan and Turkey, and in the fundamentally open-door nations of Europe. Even the act of seeking sanctuary, however, can entail serious risk. Witness the tragic capsizing of a ship overloaded with nearly 1,000 Libyan refugees in the Mediterranean Sea in April 2015.

The number of applications for refugee status in the world’s rich nations reached 866,000 in 2014. That was a 45% increase over the previous year and the highest total in 22 years. Germany handled the most applications at 173,100, followed by the United States at 121,200.

Japan has done less than any other large democracy to alleviate the refugee crisis through granting asylum. That is despite its having acceded in 1981 to the UN Convention Relating to the Status of Refugees and having implemented procedures the following year for handling applications for refugee status. Applicants who obtain refugee status in Japan receive permanent-residence visas and become eligible for the national health and pension programs and for other social welfare assistance. The number of applicants for refugee status in Japan, mainly Asians, has increased sharply since 2010, when Japan began participating in the UNHCR’s refugee resettlement program.

The resettlement program provides for finding permanent homes for persons already residing in refugee camps outside their nation of birth. The UNHCR seeks to achieve peaceful repatriation where possible and long-term accommodation as necessary in refugees’ first-stop sanctuaries. It emphasizes, however, that third-nation resettlement is a crucial complement to those approaches in addressing the refugee crisis.

According to government figures released in March 2015, Japan’s Immigration Bureau received 5,000 applications for refugee status in 2014. That was a surge of 1,740 over the previous year. Unfortunately, the bureau approves only a minuscule percentage of the applications received. 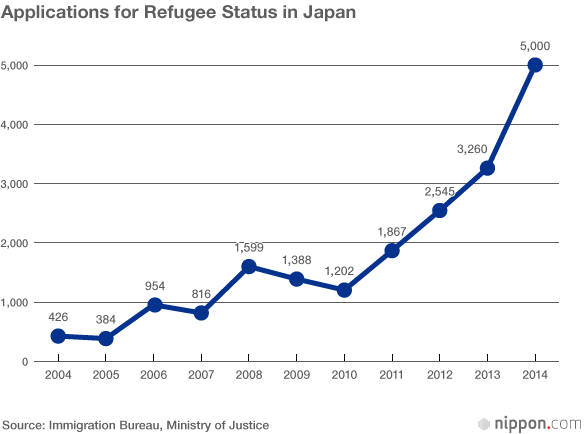 The most recent year for which data is available for detailed international comparisons is 2013. Japan granted refugee status to just 6 of the 3,260 applicants in that year. In contrast, 21,171 refugees received formal asylum in the United States, 10,915 in Germany, and 9,099 in France. Even South Korea, hardly renowned as an open-door haven for refugees, granted asylum to 57. By the end of 2014, Japan had approved a cumulative total of just 633 applications for refugee status.

Officials at Japan’s Immigration Bureau defend their low rate of approvals for refugee status applications. One reason, they say, is the nation’s lack of community infrastructure for accommodating refugees. The officials also cite misunderstanding of the approval guidelines and misrepresentation of qualifications on the part of the applicants. Only about 10% of the applicants, they explain, report being at risk of persecution from their government. And a lot of those applicants are falsifying the risk in order to secure work in Japan, according to the immigration officials.

Japan’s closed-door refugee policy is the subject of continuing criticism at home and abroad. Refugee-support groups in Japan call for the government to comply with international norms in providing asylum, and observers worldwide note the mismatch between Japan’s massive global presence in the economic realm and its virtual nonpresence in the realm of hosting refugees.

The criticism of Japan’s stance is understandable and perhaps warranted. However, any discussion of Japan’s role in addressing the global refugee crisis needs to take another important factor into account, namely, Japan’s large indirect contribution to humanitarian support. Japan is the second-largest donor to the UNHCR after the United States; in 2014 Japanese disbursements to the UNHCR totaled $181.61 million.

Furthermore, in 2011 both houses of the Diet adopted a resolution that committed Japan to developing a comprehensive asylum process and to assisting refugees and internally displaced persons worldwide. They adopted the resolution unanimously on the occasion of the 30th anniversary of Japan’s accession to the UN Refugee Convention. That gesture received favorable attention worldwide as the first such resolution by any national government.

Other promising developments also warrant attention. For example, an advisory group to Japan’s justice minister prepared a proposal in 2014 for revising the nation’s refugee policy. The group noted the increasingly diverse modes of persecution that spawn refugees across the globe and called for developing new means of refugee protection and assistance to address that diversity. In that and other ways, Japan is undeniably bolstering its contribution to alleviating the global refugee crisis.

The Specter of Unrest Next Door

Nevertheless, something conspicuously missing from Japan’s debate about refugee policy is discussion of the consequences of potential unrest on the Korean Peninsula. All too conceivable are events there that could unleash a flood of refugees, and the failure to address that possibility renders the present debate highly inadequate.

The government and people of Japan need to come to terms with the ever-so-real threats that lurk in their neighborhood and across Asia. Only then can they begin to fulfill their nation’s role as a bulwark of democracy and progress. Japanese need to pick up the pace in configuring a framework for accommodating vastly larger numbers of incoming refugees.

(Originally written in Japanese by Harada Kazuyoshi of Nippon.com and published on May 6, 2015. Banner photo: A Myanmar family arrives at Japan’s Narita International Airport in September 2013 under the UNHCR’s refugee resettlement program. © Jiji.)