Economy Jul 3, 2015
Japan’s sake brewers use more than 100 varieties of rice, but their favorite by far is Yamadanishiki. Here is a look at their reasons.

The primary raw materials for sake are brown, unpolished rice and water. Brewers can use the same varieties of rice that are grown for eating, but for premium-grade sake they usually employ varieties that have been developed especially for brewing. They refer to these varieties as shuzō-kōtekimai (literally “rice suited to sake brewing”) or simply sakamai (“sake rice”).

Shuzō-kōtekimai varieties differ from those grown for eating in three main ways: one, they tend to have larger kernels; two, their endosperm contains a large starchy core that is distinctively opaque, earning it the sobriquet shimpaku (“heart white”); and three, their protein content is lower. The typical composition of shuzō-kōtekimai brown rice is roughly as follows: carbohydrates, mainly starch, 72%; water, 15%; protein, 8%; and fat, 2%.

Sake production begins with polishing the rice to remove the bran layer, which contains most of the protein and fat content. Polishing to obtain white rice for eating removes about 8% of the kernel weight on average. In contrast, polishing rice for sake brewing removes an average of 33% of the kernel weight, according to Japan’s National Tax Agency. The amount of polishing is the defining criterion for the premium grades of sake known as ginjō and daiginjō. Ginjō labeling guarantees that at least 40% of the kernel weight of the rice used has been polished away, and daiginjō labeling at least 50%. As the figures indicate, brewing premium-grade sake is an extravagance in rice consumption. 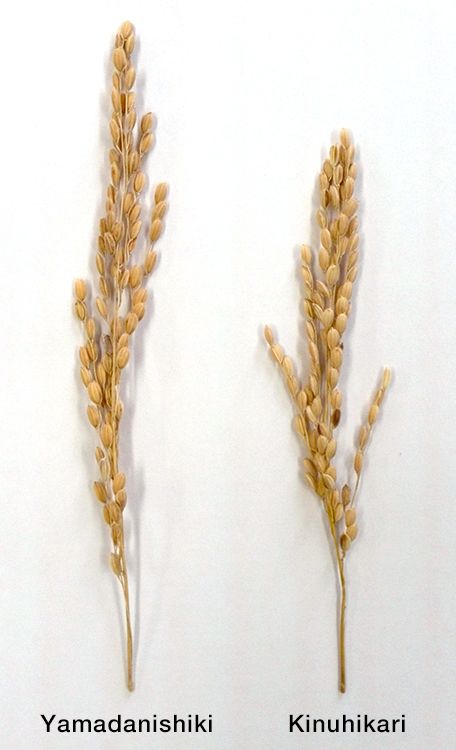 Highly polished rice is more expensive than ordinary rice, but the difference is crucial in brewing premium-grade sake. The bran layer and, immediately below it, the outer layer of the endosperm contain high concentrations of protein, which imparts a flavor generally regarded as unappealing by sake aficionados. So removing the outer layers of the rice kernels is necessary to achieve the refined flavor expected of premium-grade sake. Yamadanishiki’s large kernels, incidentally, facilitate polishing, which is part of the variety’s appeal as shuzō-kōtekimai.

The endosperm of rice for eating consists of tightly packed starch and is highly transparent. In the endosperm of shuzō-kōtekimai, the spacing of the starch molecules is looser, which results in a higher optical refraction index and accounts for the white opacity of the shimpaku core. 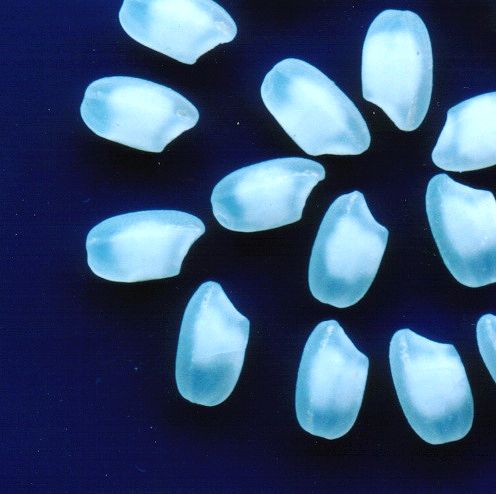 Brewers’ preference for the large kernels, the prominent shimpaku, and the post-polishing low protein of Yamadanishiki is especially strong in regard to daiginjō sake. In skilled hands, the rice yields a rich, mellow fragrance and an elegant taste in sake brands that are the very apogee of the brewer’s art.

More than 80% of Entries in National Tasting Competition

Several of the more than 100 varieties of shuzō-kōtekimai yield outstanding brews. Gohyakumangoku and Miyamanishiki, for example, command loyal followings among the cognoscenti. But Yamadanishiki has reigned supreme for some 80 years. Witness the entries in an annual contest sponsored by Japan’s National Research Institute of Brewing.

The National Research Institute of Brewing operates under the Ministry of Finance as a vehicle for promoting advances in sake brewing. Its Annual Japan Sake Awards are authoritative recognition of the finest sake brands in the land. More than 80% of the sake brands submitted for adjudication in the 2012 contest were brewed entirely with Yamadanishiki, and most of those used Yamadanishiki grown in Hyōgo Prefecture. The 2012 awards are the most recent for which detailed information is available about the rice used, but the basic trend has continued for several years.

Yamadanishiki arose in 1923 at what is now the Hyōgo Prefectural Technology Center for Agriculture, Forestry, and Fisheries. Researchers at the center created Yamadanishiki by cross-breeding the Yamadabo and Tankanwataribune varieties of shuzō-kōtekimai. The new variety soon demonstrated unprecedented excellence in sake brewing, and it acquired its now-famous name in 1936. 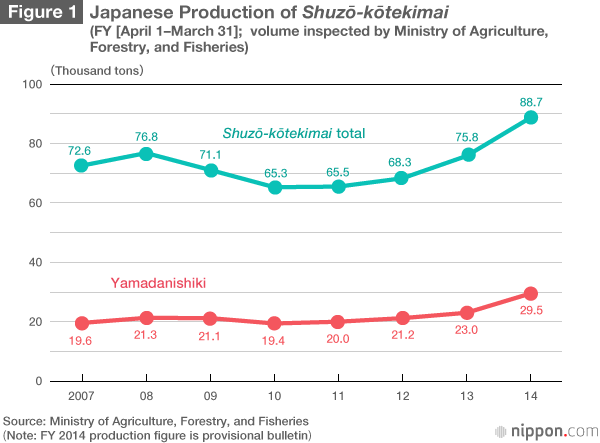 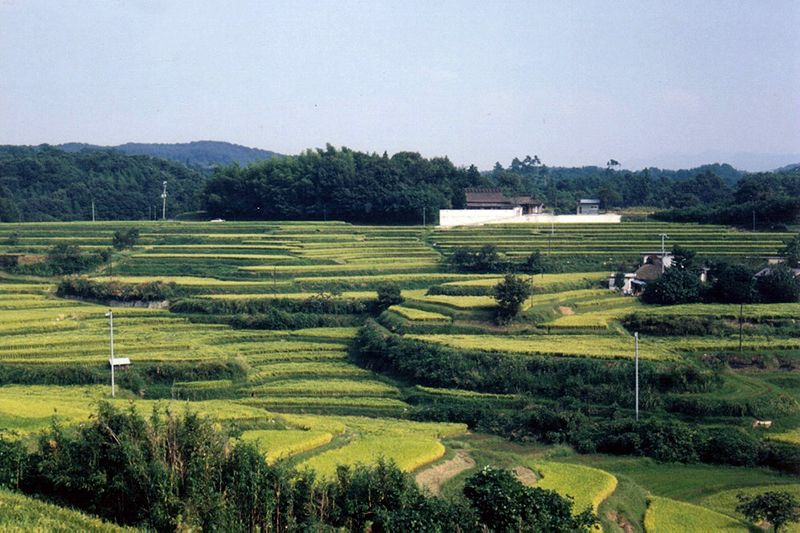 Japan’s Ministry of Agriculture, Forestry, and Fisheries inspected shipments of 102 varieties of shuzō-kōtekimai in the fiscal year ended March 31, 2015. Yamadanishiki accounted for the largest share of the total, at 33.3%. The next-largest shares were 24.7% for Gohyakumangoku, which is grown mainly in Niigata Prefecture, and 8.7% for Miyamanishiki, grown mainly in Nagano Prefecture.

Underlying the mounting demand for Yamadanishiki are the rising popularity of ginjō sake in Japan and of Japanese cuisine overseas. Exports of premium-grade sake are growing annually as diners worldwide recognize the importance of fine brews in Japanese dining. 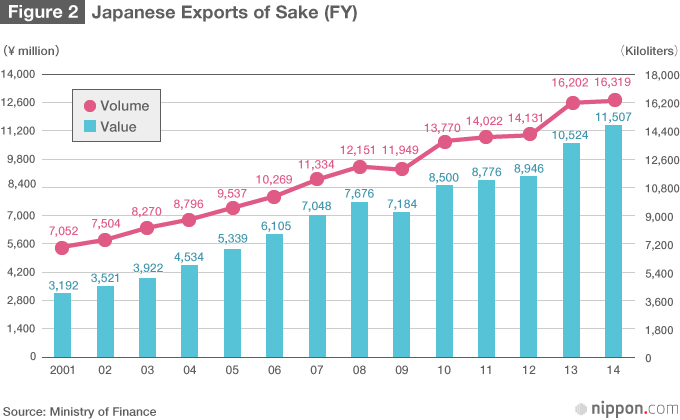 Growers of Yamadanishiki face daunting challenges. The stalks of Yamadanishiki are taller than those of other varieties, and come fall they droop under the weight of the ears of grain. Typhoons, which menace Japan around the time of the autumn harvest, are especially worrisome. Toppled by typhoon winds and rains, the soggy and prostrate Yamadanishiki can be all but impossible to harvest.

Another challenge for growers has been the Japanese government’s policy of reducing the acreage under rice cultivation nationwide. The government formerly included shuzō-kōtekimai in the overall quotas for rice production, which diminished the incentive to plant Yamadanishiki and other shuzō-kōtekimai varieties. A policy shift in the past fiscal year, however, has removed that disincentive. Sake exports are a strategic emphasis in the government’s “Abenomics” program for promoting economic growth, and the government has exempted rice grown to meet expanding demand in the sake industry from the production quotas.

The shift in government policy is encouraging established growers of Yamadanishiki to expand production and prompting other growers throughout Japan to initiate cultivation. Lending further motivation is the market: the prices for shuzō-kōtekimai are firmer than the prices for rice for eating, which have declined precipitously in recent years.

Hyōgo Prefecture’s Kita-Harima region, which stretches from the foothills of Mount Rokkō to the cities of Miki and Katou, remains the most fertile tract for growing Yamadanishiki. The variety thrives in the mild climate and clayey soil of the rolling topography there. But growers elsewhere in Japan will discover new ground for cultivation as demand for Yamadanishiki continues to rise.

(Originally written in Japanese by Nagasawa Takaaki of Nippon.com and published on June 19, 2015. Banner photo: Ears of grain hang heavily on a strand of Yamadanishiki rice. © JA Hyōgo.)