Economy Society Jan 18, 2016
Japan’s finance ministry announced that visitors to Japan in January–October 2015 outspent their Japanese counterparts overseas by more than ¥900 billion, launching the country’s balance of payments for travel into the black for the first time in decades. Figures were bolstered in part by a weaker yen, which has helped make Japan an appealing destination for tourists.

Amid a backdrop of increased tourism to Japan, the Ministry of Finance in December released statistics showing foreign tourists to the country outspent Japanese travelers overseas by ¥905 billion during the January–October 2015 period. The figure, which the MOF announced as part of regular balance of payments statistics comparing Japanese spending with other countries across a variety of areas, is expected to top ¥1 trillion for the entire year.

This figure marks Japan’s first surplus in travel spending in the two decades since the MOF began keeping data in 1996. On a Japanese fiscal year basis, which compiles data earlier, outlays in fiscal 2014 shifted into the black after 55 years in the red.

Along with travel, another bright spot in the services category has been intellectual property. Since 2013 it has made gains of over ¥1 trillion, marking a surplus of ¥1.9 trillion in January–October 2015. Many experts anticipate the two areas will combine to help offset Japan’s trade deficit, which is forecasted to continue for the fifth year running.

Balance of payments for travel is formulated by subtracting the amount spent by foreign travelers to Japan from outlays by their Japanese counterparts overseas. While deficits have been the norm, a weak yen along with other factors have worked to reduce the amount Japanese spend abroad while raising the appeal of Japan as a tourist destination. The country has enjoyed a growing influx of foreign visitors, which is expected to reach 20 million annually ahead of the government’s established target of 2020, with bakugai or so-called “explosive” shopping sprees by Chinese and other tourists producing soaring demand for Japanese products. As a result, Japan has enjoyed a surplus on a monthly basis since October 2014. 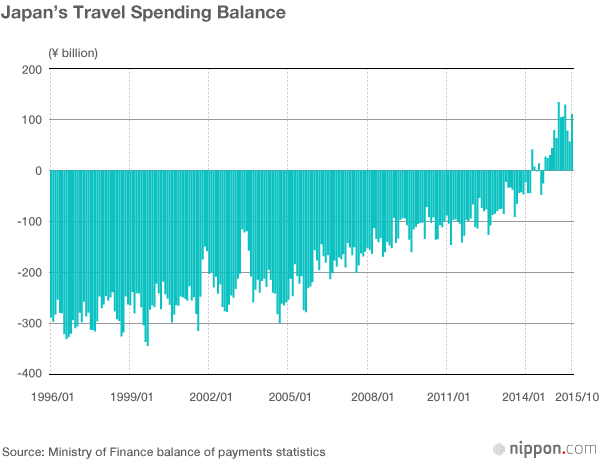 The Japan Tourism Agency welcomes the travel surplus potentially reaching the ¥1 trillion level, with a representative of the department overlooking international tourism noting the achievement is the result of a growing number of foreign visitors enjoying dining and shopping in Japan. The travel boom is one of the few bright spots for Japan’s idling economy, and the JTO hopes to extend its benefits across the country.

As Japanese firms have expanded operations and production overseas, charges for the use of intellectual property, such as patent royalties, have steadily moved deeper into the black after first marking a surplus of ¥149 billion in 2003. While it took a decade to reach the ¥1 trillion mark in 2013, a weaker yen and the government’s Abenomics policies for boosting the economy are expected to propel the surplus into the ¥2 trillion range within the next few years.

The current account balance for exports and overseas investments in January–October 2015 was ¥14.57 trillion in the black. During the same period, Japan’s trade deficit came to ¥550.6 billion on ¥62.98 trillion in exports. Many experts view travel and intellectual property as pillars for bridging the gap in the country’s trade imbalance and staunching the flow of red ink in the trade and services categories.

(Originally written in Japanese by Miki Takajirō of Nippon.com and published in Japanese on January 5, 2016. Banner photo: Japan’s Ministry of Finance.)