Politics Economy Society Jan 25, 2016
While Prime Minister Abe Shinzō has promoted the slogan of creating a society where women can shine, Japan continues to struggle to bridge its gender gap. The country languishes at 101st, the lowest among advanced nations, on the World Economic Forum’s global index on gender equality.

The World Economic Forum’s Global Gender Gap Report 2015 marks the tenth year the organization has released its influential index, with the anniversary edition comparing how countries fared in gender equality over the last decade. Published annually since 2006, the report compares levels of gender-based disparity around the globe using the four indicators of economic participation and opportunity, educational attainment, health and survival, and political empowerment. Each country’s overall level of gender equality is calculated based on various subcategories, with one being the highest possible score. 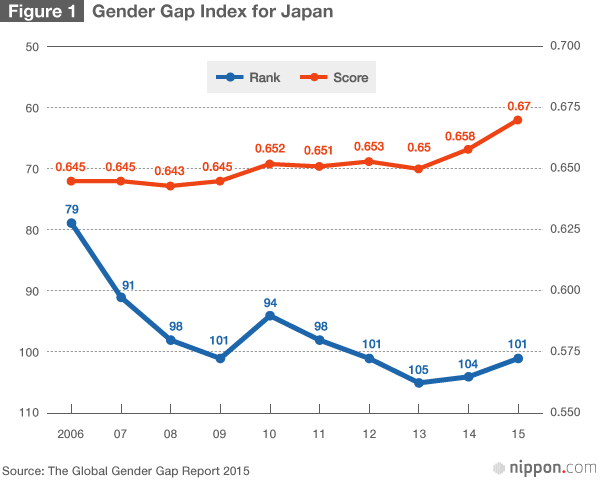 Japan ranked 79th in the inaugural index with a score of 0.645, but despite the country improving its tally marginally to 0.670 over the last ten years, its positon has slid more than 20 spots. Many point to the country’s failure to enact initiatives addressing gender inequality that are in line with general trends worldwide.

According to the report, Japan scores favorably to rank among leading countries in the fields of education and health, but lags significantly behind in political empowerment and economic participation and opportunity. 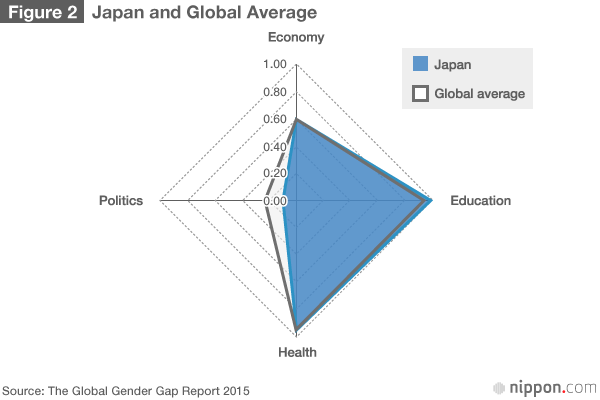 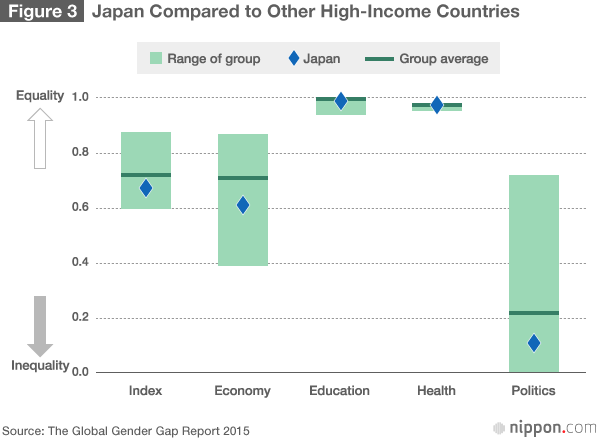 The percentage of women lawmakers, senior officials, and managers declined a point to 9% over the last decade, ranking Japan near the bottom. To break into the top 50 the country will need to raise its ratio to 35%, a difficult prospect. Similarly, Japan must boosts its ratio of women in parliament from the current 9% to 26% just to make it to 50th. The one bright spot in the category has been women in ministerial positions, which has climbed nine percentage points to 22% since 2006.

The table below lists domestic- and employment-related data for Japan and several leading European countries. Compared to France and Finland, which have high levels of labor equality, Japan’s ratio of nonregular employees is disproportionately higher for women at 33.4%. Looking at housework, Japanese men spend roughly half the amount of time on domestic chores as their counterparts overseas, illustrating how traditional gender roles of working husband and stay-at-home wife remain firmly rooted in society.

Kashima Takashi, chair of the Japan Association for the Advancement of Working Women, stresses that Japanese work culture still revolves around fulltime male employees working long hours. He also points to the country’s lack of a support system for mothers wanting to return to work after giving birth, which places women in the difficult situation of having to choose between either forging a career or becoming a stay-at-home mom. While some firms have increased the number of women in managerial positions, he notes many female managers remain either unwed or are married but have chosen not to have children. The situation in the political realm is equally dire and Kashima suggests setting gender quotas for proportional representation seats to increase the number of women in parliament.

In August 2015 the Diet passed new legislation to address gender equality in the workplace. The law introduces a variety of new regulations, including requiring companies with 301 or more employees to establish action plans for empowering women.

While groundbreaking, many feel the bill is far from perfect. A report by the Mizuho Research Institute gauging the effectiveness of the legislation identifies shortcomings, including a lack of established minimum standards, an inadequate structure for public disclosure, and insufficient structures for addressing career development for nonregular female employees. The report stresses minimum numerical targets, such as for promoting women to managerial positions, should not be one-size-fits-all solutions, but need to reflect the type of industry and company size.

(Originally written in Japanese by Murakami Naohisa of Nippon.com and published on January 8, 2016. Banner photo: Plaintiffs hold up a sign outside the Supreme Court of Japan on December 16, 2015 showing the high court’s ruling against a ban on women remarrying within six months of getting divorced. The bench specified any requirement of more than 100 days to be unconstitutional. In a different case, the court the same day also upheld a statute requiring spouses to take the same surname. © Jiji.)