Nonregular Employment on the Rise

In December 2015, the Ministry of Health, Labor, and Welfare announced that the proportion of nonregular employees at private companies had risen above 40% for the first time. According to its Survey of Employment Conditions,(*1) conducted in 2014, 40.5% of workers did not have permanent, full-time positions; this was a rise of 1.8 percentage points since the last survey was held four years earlier. The Labor Force Survey carried out in the same year by the Ministry of Internal Affairs and Communications, produced similar results, finding that 37.4 % of all employees, not including company directors, held nonregular positions. 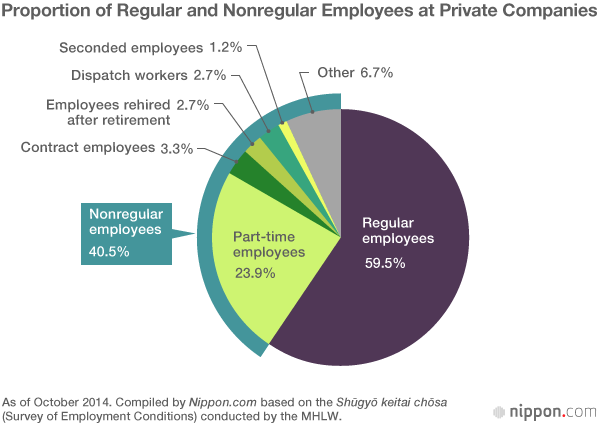 In the boom years of the 1980s, the nonregular employment rate rose no higher than 20%. It surged in the 1990s, however, as the bursting of the economic bubble drove companies to cut permanent staff and replace them with low-cost part-time and dispatch workers.

There are various theories as to why the rate has continued to rise since then. The Labor Market Analysis Report, published by the MHLW in January 2015, suggested that a major cause is the decline in the number of self-employed and employees at sole proprietorships and in the agricultural industry. 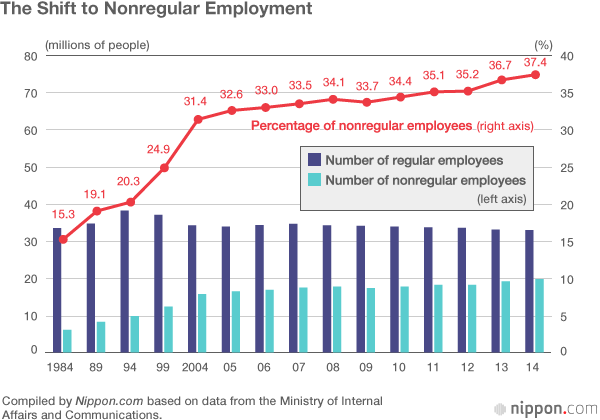 The MIC survey revealed that people past retirement age account for a growing proportion of the nonregular employee group. Of the 19.6 million workers without permanent, full-time positions in 2014, 2.3 million were 65 or over. The 0.7 million rise since 2009 has been spurred on by the postwar baby-boom generation turning 65.

The main reasons companies gave for using nonregular employees—in a question that allowed multiple responses—were “to save money spent on wages” (38.6%), “to deal with varying levels of work through the day or week” (32.9%), and “to secure capable and immediately effective staff” (30.7%).

The survey also discovered that 18.1% of nonregular employees would prefer to have regular positions if they had the opportunity. At 28.4%, the 25–34 age group included the highest proportion of these “involuntary nonregular employees.” Statistics show that around 40% of first jobs are nonregular and a growing number of new graduates spend several years moving from position to position.

Becoming a regular employee is not easy. According to the MIC’s 2012 Employment Status Survey, just 24.2% of people who changed their jobs in the previous five years upgraded from nonregular to regular employment.

The average salary for full-time nonregular employees is around 60% of that for regular employees. As well as working for low wages and enjoying little job security, employees in these positions have scant opportunities for self-development, and are insufficiently covered by health and employment insurance and other aspects of the social safety net. Poor salaries in particular have fueled concern about an increase in the number of working poor, who, despite being employed, cannot maintain a livelihood equivalent to that of someone on welfare. Financial worries also lead many nonregular employees to abandon hopes of getting married or starting a family. Among men in their twenties and thirties, nonregular employees are less than half as likely as regular employees to be married.

Health Insurance and Other Coverage for Nonregular and Regular Employees (%)

Compiled by Nippon.com based on the Shūgyō keitai chōsa (Survey of Employment Conditions) conducted by the MHLW in 2014.

The Research Institute for Advancement of Living Standards of the Japanese Trade Union Confederation conducted an Internet survey of nonregular employees in October 2015. It found that 20.9% of households in which a nonregular employee was the main breadwinner had skipped meals due to difficulties making ends meet. RIALS voiced concern over a “health gap” arising from people scrimping on medical and food expenses due to the low income from nonregular work.

The government is finally moving to address the issue. On January 22, in his 2016 policy speech at the Diet, Prime Minister Abe Shinzō announced plans to ensure equal treatment for nonregular employees. Specifically, these include expanding health insurance to part-time workers, expanding subsidies for career development to businesses that move to make positions regular or improve conditions for nonregular employees, making possible childcare or nursing care leave for contract workers in employment for more than one year, and bringing about equal pay for equal work.

(Originally written in Japanese by Murakami Naohisa of Nippon.com and published on February 12, 2016.)