Society Mar 29, 2016
The population of non-Japanese living in Japan grew to a new high of over 2.23 million in 2015, boosted by a 15% increase in both foreign students and participants in a government technical trainee program.

According to Ministry of Justice figures, there were over 2.23 million non-Japanese residents in Japan in 2015, an increase of 5.2% from the previous year and the largest tally since the ministry began keeping records in 1959.

Foreign residents include those in Japan for work, study, or other purposes, and ethnic Koreans and other minorities with special permanent residence status. After peaking at 2.14 million in 2008, the non-Japanese population declined for several years following the global economic downturn and the Great East Japan Earthquake. It began inching upward again from 2013, swelling by 110,000 new residents in 2015. 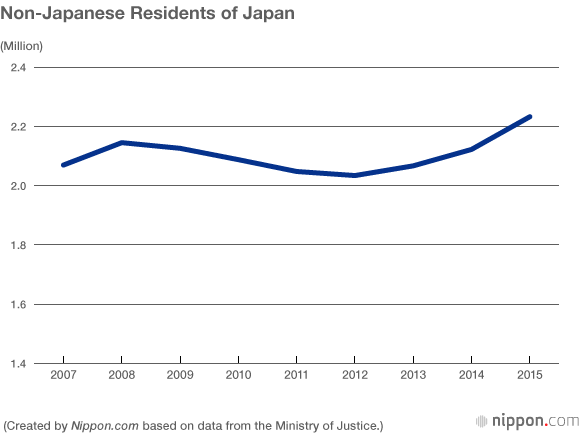 A significant uptick was seen in foreign residents engaged in school or training, reflecting rising demand for overseas workers in certain industries to ameliorate domestic labor shortages. Foreign students climbed to around 247,000, an increase of more than 30,000 compared to the previous year. Participants of a government-sponsored foreign trainee program, which places interns at companies in agriculture, fishing, and other industries, grew by around 25,000, reaching approximately 193,000.

Rise in Residents from Around Asia

By nationality, Chinese accounted for the largest proportion of non-Japanese residents at more than 660,000, followed by South Korean, Philippine, and Brazilian nationals. Of note was a sharp increase in the number of Vietnamese living in Japan, with over 40,000 taking up residence in 2015. Figures for Nepalese and Taiwanese also grew significantly.

Japan has long had a large population of ethnic Koreans, who first took up residence during the decades Japan occupied the Korean peninsula. In 2015, the MOJ began compiling data separately for people with affiliations to North Korea and those holding South Korean citizenship, with the former dwindling by 5.1% to around 34,000 and the latter falling by 1.7% to just under 458,000.

(Banner photo: Foreign runners cross the finish line of a five-kilometer friendship run held prior to the Tokyo Marathon on February 27, 2016. Of the 1,499 participants in the event, 919 were from overseas. © Jiji.)