Economy May 4, 2016
Low-cost carriers offering budget airfares in exchange for no-frills service and streamlined operations are finally finding a place in Japan. The Ministry of Land, Infrastructure, Transport, and Tourism reports that LCCs averaged a 10.1% share of domestic flights through October 2015, indicating that discount airlines are on the verge of solidifying a double-digit market share just four years after they began operating in Japan.

Air passenger transport in Japan has long been dominated by the full-service carriers Japan Airlines and All Nippon Airways, which retain a near monopoly on domestic flights. Deregulation in the second half of the 1990s enabled such airlines as Skymark and Air Do to enter the market with a business model of low airfares similar to low-cost carriers. The major carriers, however, responded with discount flights, and the new entrants struggled in many cases.

The government deregulated air transport further in 2007. Based on the Asia Gateway Initiative of the first administration of Abe Shinzō, restrictions were lifted on foreign airlines offering flights to and from airports outside of the Tokyo metropolitan area. With the bankruptcy of JAL in 2010, the continuation of many domestic regional routes came under scrutiny. As a result, the government moved to promote the entry of LCCs.

The founding year for Japanese LCCs was 2012, with Peach Aviation, the first domestic LCC, beginning operations in March, followed by Jetstar Japan taking to the air in July. 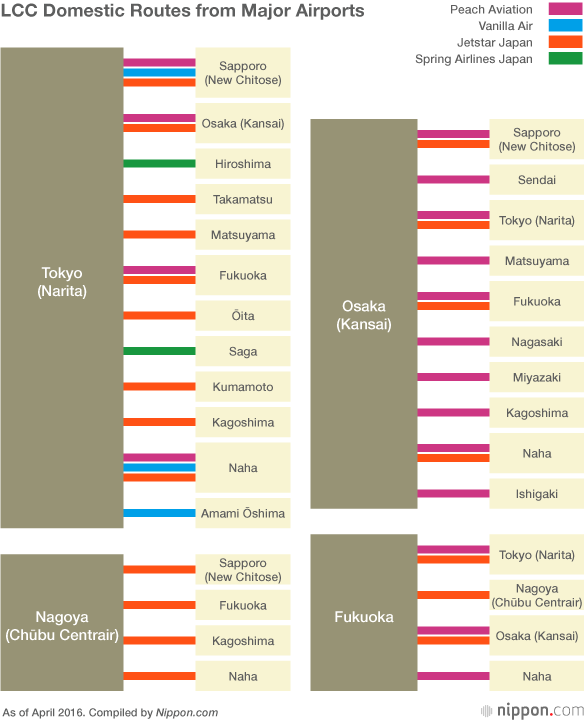 According to the Ministry of Land, Infrastructure, Transport, and Tourism, the LCC share of domestic air travel rose from 2.1% in 2012 to 5.8% in 2013. This figure climbed to 7.6% in 2014, surpassing the 7.5% share of international flights held by discount carriers.

Unlike the situation for major airlines and existing new entrants, Japan’s LCCs do not have runway slots at Tokyo’s Haneda Airport, where domestic routes are concentrated. Instead, their main home bases are Narita and Kansai, making them convenient for fliers coming from overseas to make transfers once they arrive in Japan.

Peach Aviation , based at Kansai International Airport, was established by ANA and a Hong Kong investment company. It has 14 domestic routes and operates 9 international routes from Kansai and Haneda to such destinations as Taiwan and South Korea. The airline is managed independently of ANA, and it has generated new demand among young people through low airfares.

Jetstar Japan  has JAL, Qantas, and Mitsubishi Corporation as its major shareholders. The airline offers 17 domestic routes from Narita and Kansai, as well as international flights connecting Japan with Hong Kong and Taiwan.

Vanilla Air is a consolidated subsidiary of ANA. It operates three domestic routes connecting Narita with Amami, Naha, and Sapporo. The airline also offers international flights from Narita to Taiwan and Hong Kong.

Spring Airlines Japan is an affiliate of Spring Airlines, a Chinese LCC. It operates two routes in Japan connecting Narita with Hiroshima and Saga. It has two international routes linking Narita to Wuhan and Chongqing in China. Spring Airlines provides many routes between China and Asian cities, a network representing a major business advantage for the carrier.

AirAsia Japan was established in 2014, led by Malaysian LCC AirAsia with capital participation from several Japanese companies, including Rakuten. It is based at Chūbu Centrair International Airport. Two domestic routes connecting Chūbu to Sapporo and Sendai and one international route from Chūbu to Taipei are scheduled to begin operating in summer 2016. The airline also plans to offer flights to China and Hawaii.