Politics Society Culture May 20, 2016
An introduction to Hiroshima’s Peace Memorial Park, which commemorates the bombing of the city with numerous monuments and facilities.

A Memorial to Peace

The Peace Memorial Park is located in downtown Hiroshima to the west of the Kamiyachō and Hatchōbori government and business district. It is around 20 minutes by tram from Hiroshima Station; the nearest stops are Genbaku Dome–mae, Hondōri, and Fukuromachi.

The park is in Nakajima, which was once the city center and home to an estimated 6,500 people before the atomic bombing. The target for the bombing was Aioibashi—a distinctive T-shaped bridge easy to recognize from the air—just to the north of where the park now stands. The Nakajima district was closest to the epicenter of the explosion, and on the morning of August 6, 1945, it was devastated in a single moment.

After the war, the city of Hiroshima decided to build a park in the area as a memorial to peace. Completed in April 1954, the park has a total area of some 122,000 square meters. 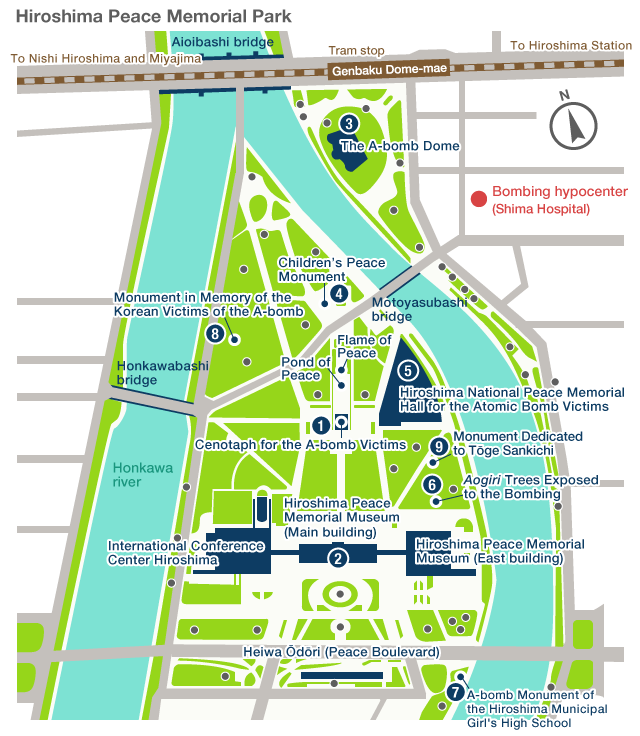 The cenotaph for victims of the A-bomb is at the center of the park. To the south is the Hiroshima Peace Memorial Museum and across the river to the north is the A-bomb Dome.

1. Cenotaph for the A-bomb Victims

The cenotaph consists of a stone chest beneath an arch representing the roof, inspired by the haniwa pottery used to decorate prehistoric tombs. It is also known as the Memorial Monument for Hiroshima, City of Peace, because it was built out of a desire to reconstruct postwar Hiroshima as a city dedicated to peace.

Within the chest is a record of the names of all the victims of the atomic bombing, not limited by nationality. As of August 6, 2015, there were 297,684 names on the list. The cenotaph is inscribed with the phrase: “Let all the souls here rest in peace, for we shall not repeat the evil.” 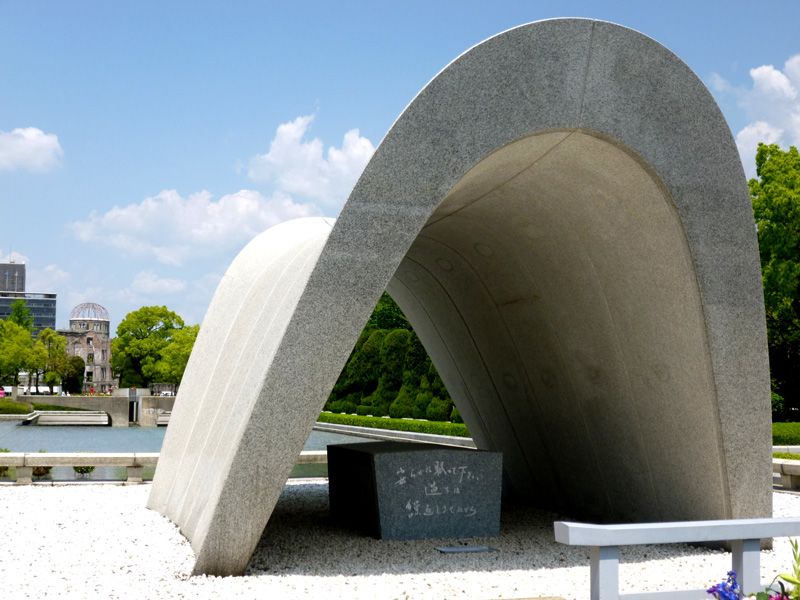 Cenotaph for the A-bomb Victims.

The museum was built by the city of Hiroshima to present an accurate picture of the atomic attack by recording the tragic and terrible effects of the bombing and subsequent radiation. It opened in 1950. The main building conveys what happened on August 6, 1945, through scientific explanations and exhibits of items belonging to the victims. The east building tells the story of Hiroshima before and after the bombing and describes the city’s nuclear disarmament efforts. 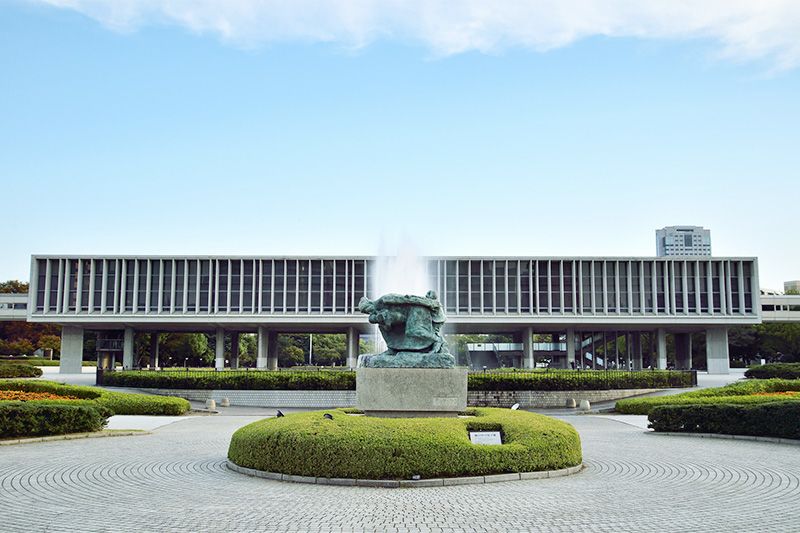 The A-bomb Dome—also known as the Genbaku Dome—is a brick building designed by Czech architect Jan Letzel that was completed in 1915 as the Hiroshima Prefectural Commercial Exhibition Hall. In 1945, the structure housed national and municipal government offices. As it was located just 160 meters from the epicenter of the blast, most of the building’s walls were destroyed in the bombing, but it was one of the few structures in the area to remain upright. In the postwar era it became a symbol of the atomic bombing; in 1996 it was inscribed as a UNESCO World Heritage site. Preservation work at three different times has helped to keep the building standing. 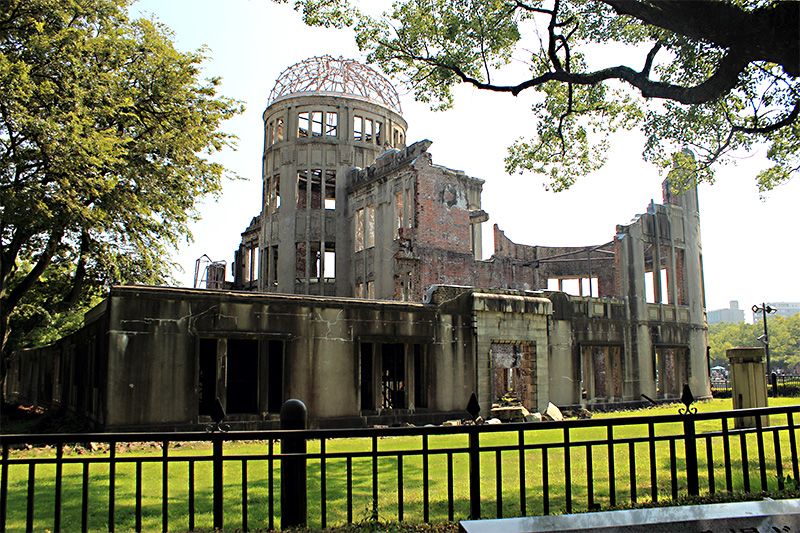 The A-bomb Dome viewed from the north.

Sasaki Sadako was exposed to radiation at the age of two when Hiroshima was bombed. A decade later, she was diagnosed with leukemia and died after an eight-month battle with the disease. Based on a traditional Japanese belief, Sadako thought that if she folded 1,000 origami cranes she would recover; she ultimately made more than 1,300, often using the paper wrappings from her medicine. When she died, her shocked elementary school classmates wanted to build a statue for all the children who died as a result of the atomic bombing, and schools around the country began raising money. On May 5, 1958 (Children’s Day), the statue was completed. Schoolchildren often bring folded cranes with them on trips to the monument today. 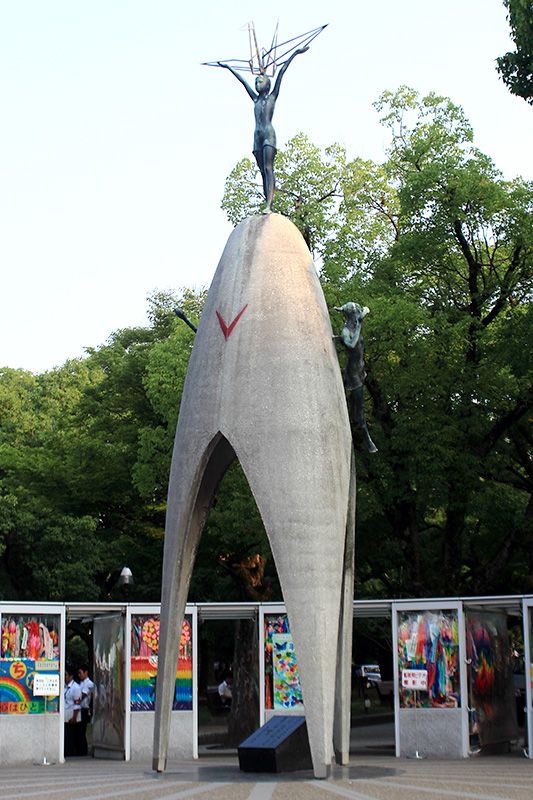 Opened by the Japanese government in 2002 as a place to mourn the victims of the atomic bombing. It contains tens of thousands of written and video testimonies by survivors of the bombing and photographs of those who were killed.

There are almost 50 memorials in and around the park constructed by schools, workers’ organizations, and other groups. Here are some of them.

6. Aogiri Trees Exposed to the Bombing

These aogiri (Chinese parasol) trees were originally growing 1.3 kilometers from the epicenter of the explosion, and took the full force of the heat and blast. Although apparently dead, the next spring they started to bud again, giving hope to the people of the city. In 1973, they were transplanted to their current location in the park by the east building of the Peace Memorial Museum.

A total of 676 students at this girl’s school were killed in the bombing, many of whom were deployed in building demolition work around the south part of where the park now stands. No other Hiroshima school suffered as many fatalities. The monument was constructed at the school in 1948 before being moved to the park in 1957. When it was built, the General Headquarters of the Supreme Commander for the Allied Powers did not allow the use of the characters 原爆 (genbaku, or “atomic bomb”), so instead the formula E = mc2 appears on the memorial as an indirect reference to the bombing.

8. Monument in Memory of the Korean Victims of the A-bomb

Built in 1970 and moved into the park in 1999 from its original location near the Honkawabashi Bridge. Korea was a Japanese colony from 1910 and many Koreans were brought to work in Japan through conscription or forced service, including a large number in munitions plants in Hiroshima. There are believed to have been tens of thousands of Koreans in the city when it was bombed, and it is estimated that 20,000 of those who were killed were from Korea.

To the south of the monument is a gravestone that remains from a temple completely destroyed in the bombing.

Tōge Sankichi was a local poet who lived through the bombing and became known for his many antinuclear and pacifist works. His most famous poem, beginning “Give back my father, give back my mother,” is inscribed on the monument.