Society Sep 28, 2016
The Survey of Living Conditions compiled by the Ministry of Health, Labor, and Welfare show that 68.1% of Japanese mothers with children under 18 years old were gainfully employed in 2015. The rate, the highest since the survey began monitoring working mothers in 2004, reflects an increase in the number of single mothers and overall growth in women’s workforce participation.

In July, the Ministry of Health, Labor, and Welfare released its 2015 Comprehensive Survey of Living Conditions(*1) that showed the ratio of mothers in Japan with gainful employment had risen to a record 68.1%. The figure has steadily increased over the last decade, climbing more than 11 points from 56.7% when the ministry began keeping track in 2004. 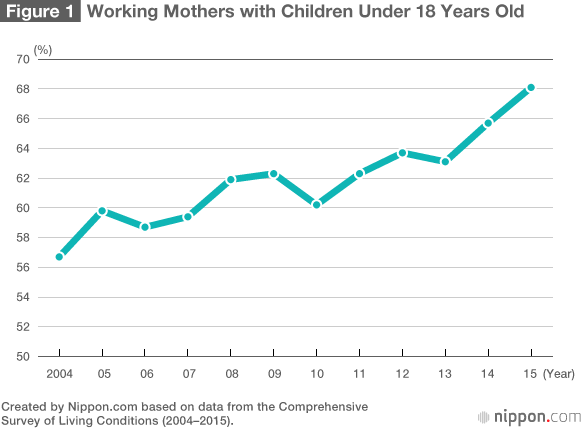 According to the 2015 survey around 11.8 million Japanese households, or 23.5% of the total, have at least one child under 18 years old. Among these were 793,000 single-mother households and 78,000 single-father homes. Since 2005 single-mother families have increased by 15%, while households headed by a single father have remained relatively unchanged. This indicates a strong tendency for women to retain custody of children in the case of separation or divorce, working to lift the share of working mothers, many of whom need to rejoin the labor force to support their family. 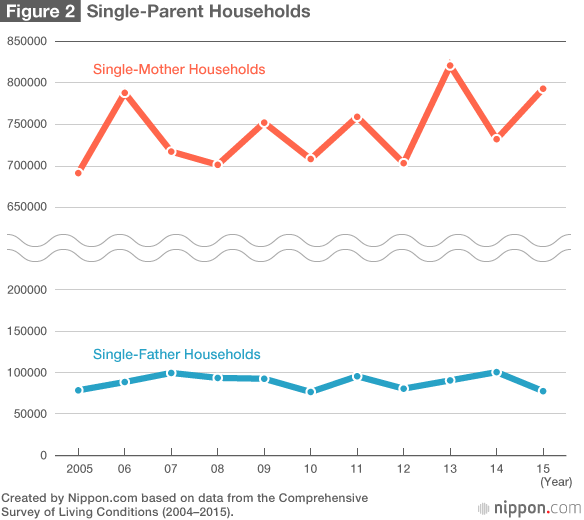 Young Mothers Remaining in the Workforce

According to the White Paper on Gender Equality compiled by the Cabinet Office, women’s employment is on the upswing as fewer women leave the workforce after marriage or childbirth. This latter phenomenon is expressed as a so-called “M-curve” created as Japanese women’s labor participation rises during their teens and early twenties, dips as women leave the workforce after marriage or childbirth, and then climbs again when they return to work after their childcare years. Japan’s M-curve has remained a prominent feature of female labor statistics but has become less pronounced in recent years. 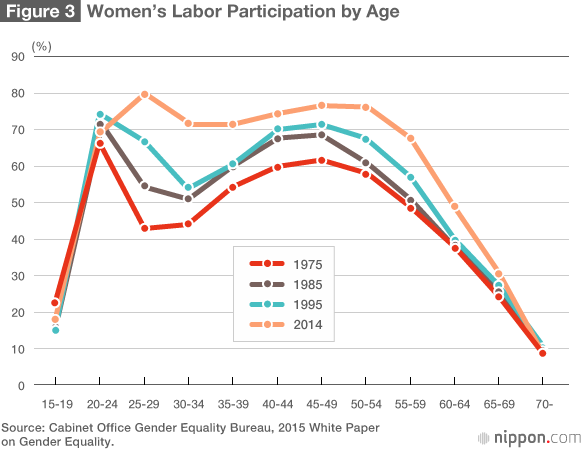 The 2015 Comprehensive Survey of Living Conditions shows that labor participation for mothers with children less than a year old was around 40%. This increases to around 70% when children turn 5 and further to roughly 80% after the kids reach 12.

Among working mothers the share of regular, full-time employees was 22.4%, those self-employed or working at family businesses was less than 10%, and 37.2% held nonregular positions. Looking at this latter group, 10% of working mothers had a child under 1 year old and 40% had a child older than 7.

These figures illustrate there is still a strong tendency for Japanese women to leave the workforce when they have children and rejoin after their child-rearing duties diminish, often taking part-time positions as a way to supplement the family income. Recently, a growing number of mothers have been choosing to remain on the job after childbirth, a trend that has been aided by the Japanese government enacting a variety of measures aimed at supporting working mothers. Encouraging more mothers to take an active part in the workforce, however, will require changes in people’s attitudes toward traditional child-rearing roles along with institutional reforms in hiring and labor practices.