Society Nov 3, 2016
On October 7, the Japanese government published its first karōshi white paper, assessing the problem of death by overwork. It reveals that at one in five companies, employees risk seriously damaging their health by doing over 80 hours overtime per month.

Excessive working hours can cause physical and mental exhaustion, impairing health and sometimes leading to death by overwork, known as karōshi in Japan. Although recognized as a social problem as early as the second half of the 1980s, it was not until 2014 that a law addressing karōshi was passed. On October 7, 2016, the government issued its first white paper examining the issues surrounding death by overwork and the measures being taken to prevent it.

Official Figures Just the Tip of the Iceberg

The Ministry of Health, Labor, and Welfare recognizes deaths, including suicides, as being work-related when they conform to standards that have been established to define overwork. The white paper stated that in fiscal 2015, labor accident insurance was paid out in 96 cases where people died of heart or brain failure and in 93 cases of suicide or attempted suicide caused by mental health issues. 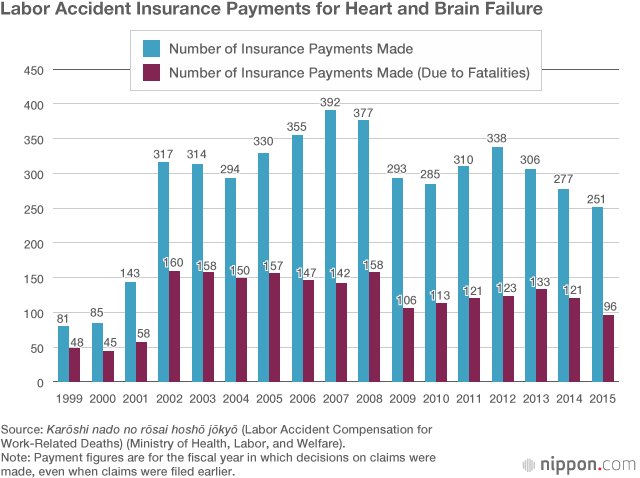 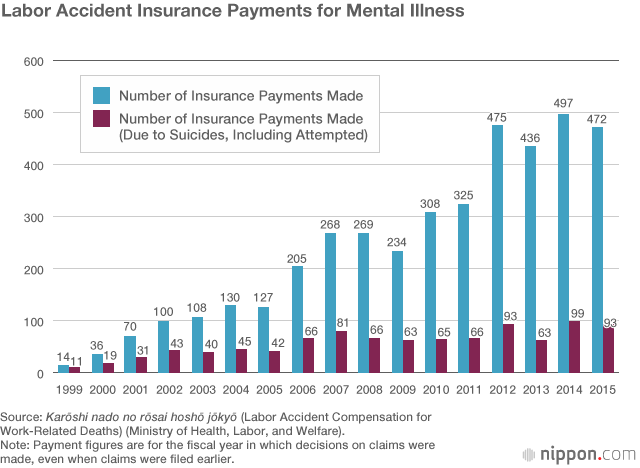 Payments in cases where death was caused by heart or brain failure have fallen slightly since the 2000s. By contrast, compensation payments related to deaths caused by mental illness have gradually risen. In 2015, there were 1,515 cases where claimants sought labor insurance payouts due to depression or other mental illness deriving from the heavy psychological burden of work. This is a 10-fold jump from the number of claims in 1999.

The white paper also included data from the National Police Agency and Cabinet Office showing that work issues were a contributing factor for 2,159 suicides in 2015. This figure suggests that deaths officially recognized as being caused by overwork are just the tip of the iceberg.

Among the officially recognized cases in 2015, almost all the workers who died of heart or brain failure did more than 80 hours of overtime per month on average, while many who committed suicide due to mental issues were clocking over 100 hours. In 18 out of the 93 suicide cases, the victims worked over 160 hours of overtime.

In 2014, Japanese workers spent an average of 1,741 hours on the job. This is somewhat lower than 1995, when the average was over 1,900 hours, but it is still considerably longer than many Western countries. The drop is largely the result of an increasing proportion of part-time employees in the workforce, moreover, and full-time workers still put in around 2,000 hours each year. 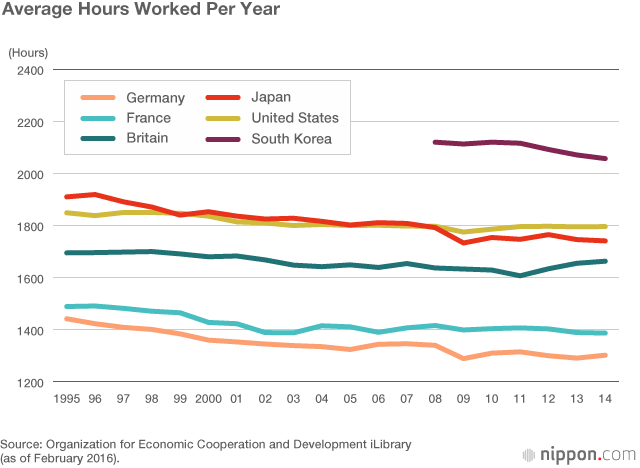 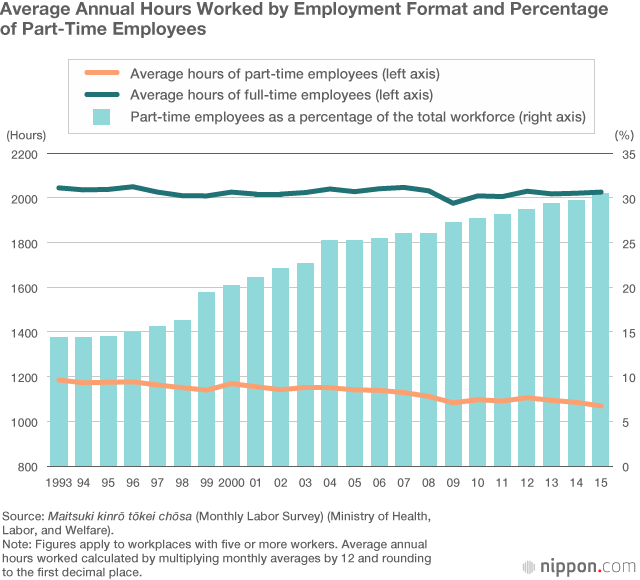 Under labor accident standards, 80 hours overtime in a month is known as the “karōshi line.” The industries with the highest proportion of employees crossing this line with excessive overtime were information and communications (44.4%), academic research and specialist and technical services (40.5%), and transportation and postal services (38.4%).

In the employee surveys, 36.9% of permanent employees responded that they had high levels of stress. This proportion increased in line with the amount of overtime they performed, with 54.4% of those who did more than 20 hours of overtime per week reporting high stress.

In a separate survey on employee health, conducted by the MHLW in 2013, 52.3% of workers stated that they felt strong unease, worry, and stress in their jobs and working life. Respondents were asked to cite up to three reasons for their condition, of which “the quality and quantity of work” was the top answer, chosen by 65.3%, far ahead of “mistakes at work” and “interpersonal relations.” 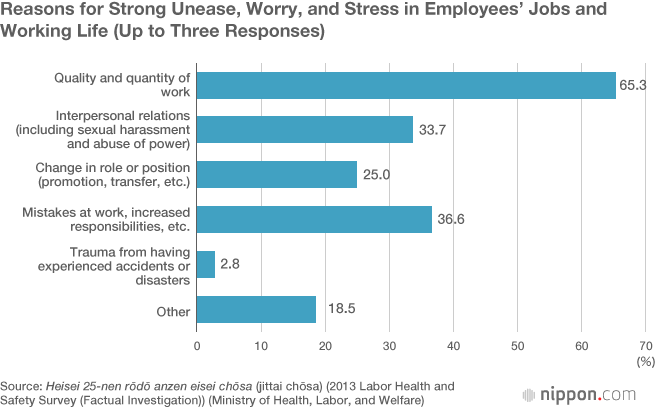 (Originally written in Japanese. Banner photo: The mother of an employee at advertising giant Dentsu who committed suicide, attends a press conference in Tokyo on October 7, 2016. Takahashi Matsuri killed herself in December 2015 in her first year at the company after graduating from the University of Tokyo. The suicide was adjudged to be the result of overwork, leading to a major reaction, including an investigation of Dentsu by the Tokyo Labor Bureau. © Yomiuri Shimbun/Aflo.)