Society Feb 23, 2017
A 2016 survey by the Japan Family Planning Association found that the percentage of “sexless” married people, who have not had sexual intercourse for at least a month, reached its highest level, at 47.2%. This is a 2.6-point increase over the previous survey, conducted in 2014, and 15.3 points higher than the first such survey, carried out in 2004.

In October–November 2016, the Japan Family Planning Association held its eighth survey of men’s and women’s lifestyles and mindsets, targeting 3,000 women and men aged 16–49 (including those not yet married). The 1,263 responses received for the survey, conducted every two years, painted a picture of a Japan where sex, romantic love, and marriage hold less allure for many younger Japanese than ever before.

According to the survey, the amount of sexual intercourse among the 1,025 respondents with sexual experience was as follows: 17.1% once a month, 9.0% twice, 5.9% three times, 5.6% four times, 6.1% five times or more. Meanwhile, 53.4% of male and 48.8% of female respondents said that they had had no sexual intercourse during the past month. These percentages of sexually inactive respondents were 5.1 points higher for men and 1.3 points lower for women than in the previous survey, carried out in 2014. 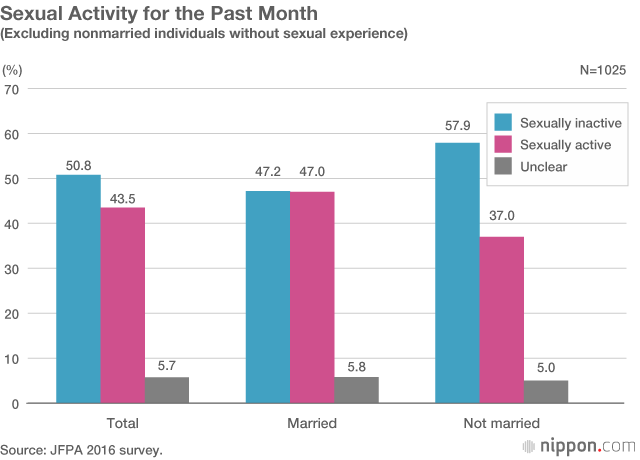 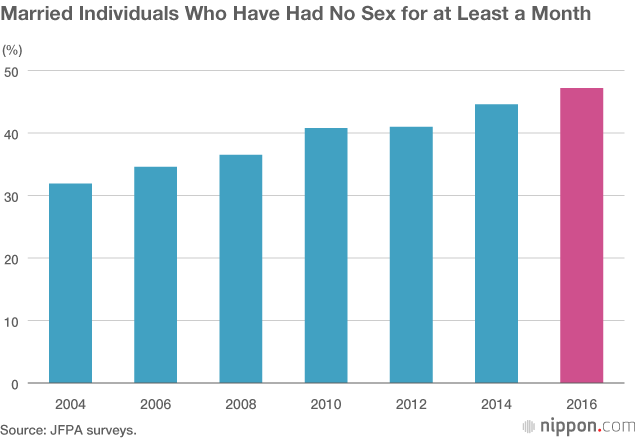 When asked to cite their reasons for being uninterested in sex, the most common reason among married men, at 35.2%, was that they were “too tired from work,” followed by 12.8% who said it was because they “view their spouse as an immediate family member,” rather than a romantic partner, and 12% who were “less interested in sex after the birth of a child.” Among women, the most common reason cited, at 22.3%, was that sex is “too much hassle.” This was followed by 20.1% who “lost interest after childbirth” and 17.4% who were “too tired from work.”

Comparing the four surveys conducted since 2010, it becomes clear that, in 2016, there was a rapid increase in the number of men selecting the “too tired from work” response. There has also been an upward trend for women losing interest because they “view their spouse as an immediate family member,” while the number saying that sex is “too much hassle” has been decreasing.

Even though the number of women pointing to the “hassle” of sex has declined over the course of the past four surveys, it has remained the top reason cited each time. In the 2016 survey, women pointed to that reason at a rate that was 15.1 points higher than men. In terms of the connection between men’s average working hours and a sexless relationship, working longer hours did not seem to correlate to a higher ratio of sexless relations. Meanwhile, among couples with a household yearly income over ¥10 million, the ratio of sexless persons is relatively high.

JFPA Director Kitamura Kunio offers the following comments regarding the survey. “I had expected the level of sexless men and women to plateau this time around compared to the dramatic rise we saw in the previous survey, but in fact it increased further. When men and women do not make enough effort to communicate with each other and fail to maintain a positive attitude toward sex, then the trend toward a sexless relationship worsens.”

Meanwhile, the age of 20 is the point where over 50% of the men surveyed had had sex, while among women the age was 19. And the point at which 70% of those surveyed had had sex was 23 for men and 22 for women. In the past seven surveys, conducted since 2002, men have lagged behind women somewhat in terms of the age of losing their virginity. The ratio of men without any sexual experience, meanwhile, was 21.5%, while this figure stood at a lower 16.6% for women. 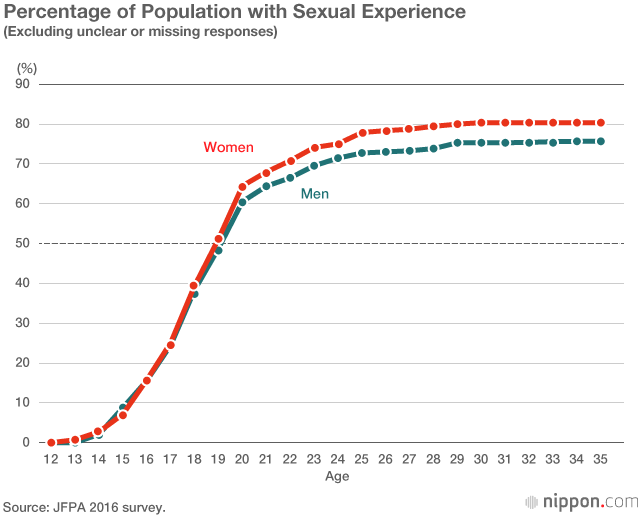 40% of Unmarried Japanese are Virgins 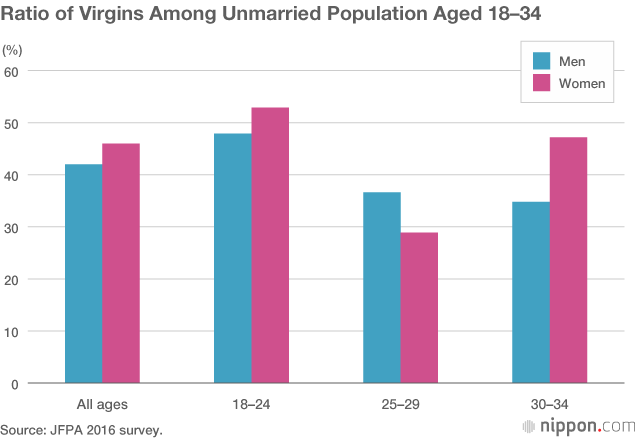