The State of Recovery in Tōhoku Seven Years After 3/11

Society Mar 9, 2018
A look at current data on recovery work along the Sanriku coast in Tōhoku and the lingering effects of the nuclear disaster in Fukushima seven years on from 3/11.

According to Reconstruction Agency figures, over the last two years more than 100,000 people displaced by the Great East Japan Earthquake have moved from provisional lodging to permanent accommodations. As of January 2018, though, approximately 75,000 evacuees remain in temporary housing, including around 20,000 who reside with relatives and another 20,000 in temporary prefabricated structures.

Of note was a significant drop in evacuee numbers in Fukushima Prefecture. The decline was largely related to authorities ending a policy of providing housing support for people who fled from areas outside of designated evacuation zones in the wake of the nuclear accident at Tokyo Electric Power Company’s Fukushima Daiichi Nuclear Power Station. When the government discontinued the program in late March 2017, it also stopped including these “voluntary evacuees” in overall figures.

The stress of residing in temporary living conditions continues to take a toll on evacuees. Over the past two years there were around 200 fatalities indirectly caused by the disaster, so-called disaster-related deaths that include suicide and deteriorating physical health brought on by changes in the living environment.

Authorities have made progress in constructing public housing projects for disaster victims and securing suitable elevated land for private homes, completing 90% of units and finishing 80% of plots. The Reconstruction Agency expects most projects to be completed by the end of fiscal 2018.

Reconstruction Agency figures, as of January 2018

Overall production in manufacturing, agriculture, and other key sectors in Fukushima, Iwate, and Miyagi Prefectures has largely returned to predisaster levels. In tsunami-stricken areas, 84% of farmland has been restored and 93% of seafood processing facilities have resumed operations.

A survey of companies receiving government assistance through a program for small and medium-sized businesses showed that 45% of recipient firms report sales have recovered. Looking by sector, though, around 80% of construction companies say business has climbed back to pre-3/11 levels, compared to only 30% of firms in the fisheries and seafood processing fields.

In Fukushima, concerns over radiation levels remain a barrier to full recovery. The market value of staple products like peaches and wagyū beef continue to average 10%–20% below national wholesale prices. The tourism industry is also struggling to get back on its feet, with the number of visitors to the prefecture still less than a tenth of what it was before the nuclear accident.

Reconstruction Agency figures, as of January 2018

Following the lifting of evacuation orders in several areas around the Fukushima Daiichi plant, only seven municipalities, including all of Futaba and Ōkuma and portions of Namie and four other towns, remain closed to habitation. 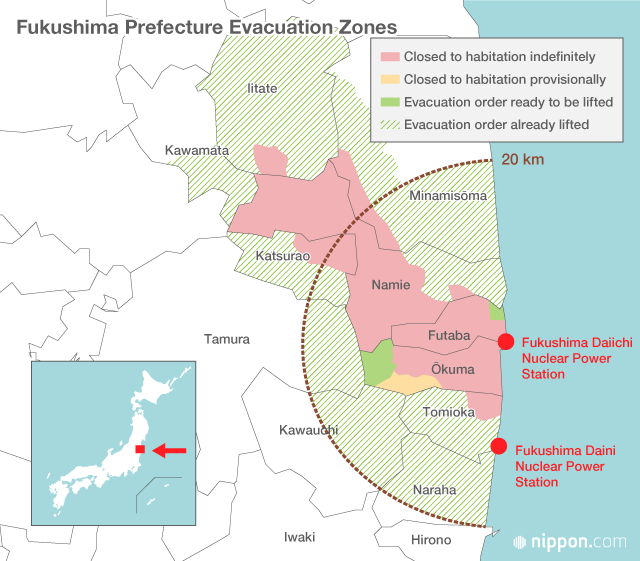 The government has officially designated three areas in the evacuation zone: Area 1, where it is expected that residents will have difficulty returning for a long time; Area 2, in which residents are not permitted to live; and Area 3, in which evacuation orders are expected to be lifted. Since April 2014 authorities have lifted evacuation orders in 11 municipalities.

While many evacuees are preparing or have already returned to their homes, a significant number are unwilling or unable to return and have decided to stay where they are. According to a survey conducted by the Reconstruction Agency in 2015 and 2016, over half of the residents of affected areas in Ōkuma, Futaba, Namie, and Tomioka said they did not intend to return to their homes.

As of October 2017, approximately 35,000 of Fukushima’s roughly 55,000 evacuees reside in other prefectures. Authorities have largely finished decontamination, including of homes and public facilities, and airborne radiation levels have declined across the prefecture. Readings taken in the city of Fukushima, the prefectural capital, in November 2017 were at 0.15 microsieverts per hour, compared to an average of 0.04 microsieverts prior to the meltdown.

Decommissioning of Fukushima Daiichi, the site of Japan’s worst nuclear accident, is moving ahead slowly. In 2017 investigators started looking inside Units 1, 2, and 3 using robots and other equipment. While it was hoped these probes would reveal the location of melted fuel and debris inside reactors, cleanup teams were unable to gather sufficient information to forge a definite strategy for moving forward.

In September 2017 the government and TEPCO revised their decommissioning “roadmap” for the first time in two years. The final decisions on how to remove melted fuel and the order in which decommissioning work on reactors will take place were deferred until fiscal 2019. The scheduled start of removing spent fuel rods from pools inside Units 1 and 2 was also postponed for three years and is now tentatively set to get underway in 2023. The roadmap, however, retained its 30–40-year timeframe for decommissioning the Daiichi plant.