Society Apr 11, 2018
Japan’s 2015 census showed that southern Kantō (Tokyo, Kanagawa, Chiba, and Saitama Prefectures) accounted for 28.4% of the overall population. This concentration in the Tokyo metropolitan area is expected to rise even further in the period up to 2045.

Continued Concentration in the Capital

On March 30, 2018, the Ministry of Health, Labor, and Welfare’s National Institute of Population and Social Security Research released its population forecast for regions of Japan up to the year 2045.

The 2015 national census showed that southern Kantō (Tokyo, Kanagawa, Chiba, and Saitama Prefectures), which makes up the so-called Tokyo metropolitan area, accounted for 28.4% of Japan’s overall population. This region’s population is likely to continue growing, to the point where it will account for 31.9% of the national population by 2045. In contrast, the relative populations of other regions of Japan are predicted to either remain unchanged or decline in the years ahead. This means that the extreme concentration of the national population in the Tokyo metropolitan area is likely to continue. 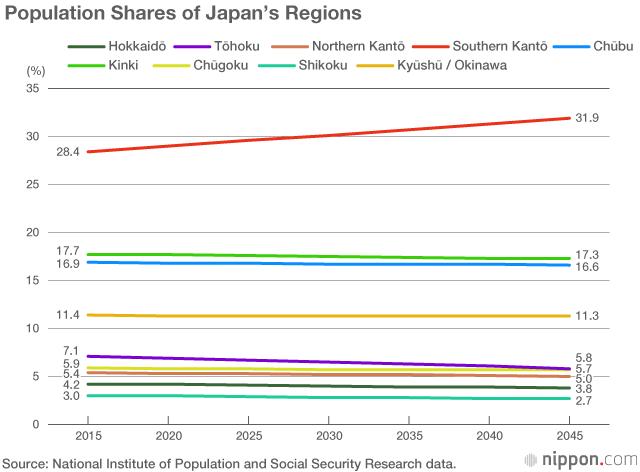 As for the breakdown in population shares by prefecture, the 2015 national census showed that Tokyo held the highest share, at 10.6%, followed by Kanagawa at 7.2% and Osaka at 7.0%. The population shares of Tokyo and Kanagawa are expected to increase further, so that by 2045 the percentages will be 12.8% and 7.8%, respectively, whereas the population of Osaka Prefecture will basically remain unchanged at 6.9%. The relative shares of other prefectures in the Tokyo Metropolitan area, Saitama and Chiba, will grow, as will those of Aichi, Fukuoka, and some other prefectures.