Society Apr 12, 2018
International marriages peaked in 2006, but have declined considerably since then. Especially prominent is the massive drop in unions between Japanese husbands and Filipina wives.

According to a demographic survey released by the Ministry of Health, Labor, and Welfare, in 2016 Japan had 21,180 international marriages. In total 620,531 couples tied the knot across the country during the year, meaning that one in every 29 marriages was between a Japanese national and a foreign citizen. 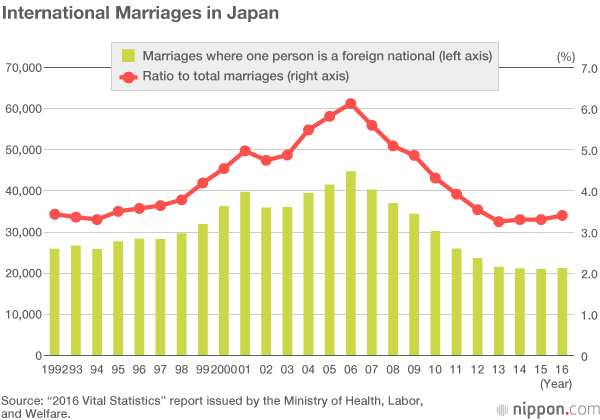 Among the factors seen as contributing to the drop in the number of international marriages, revisions to immigration laws enacted in 2005 cracked down on women entering the country on entertainer visas to work in hostess clubs. The government has also tightened up on fake marriages contracted with the aim of obtaining Japanese citizenship. Two of the most prominent pairings have seen significant declines in the number of unions recorded over the past decade. Nuptials between Japanese husbands and Filipina wives plummeted by 72% from 12,150 cases in 2006 to 3,370 in 2016, while those between Japanese husbands and Chinese wives fell by more than half from 12,131 to 5,526.