The National Police Agency announced that in 2017 there were only 22 shooting crimes throughout Japan. These are defined as cases where people with firearms cause death, injury, or property damage, but exclude accidents and suicide. Members of organized crime syndicates were the perpetrators in 13 of the crimes. Three people were killed and five injured.

According to the Gun Violence Archive, a US-based survey group that collects information on gun violence, there were 15,612 gun-related deaths in the United States in 2017. This means that on average 42 people were killed each day in the United States as a result of gun violence, which is just under the total of 44 gun-related deaths in Japan over the past eight years. 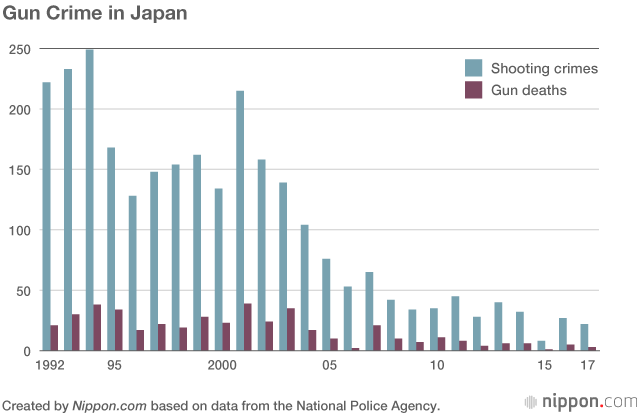 Japan, which is known for its strict firearms legislation, has historically had relatively little gun crime by international standards. In 2008, the number of shooting crimes fell below 50 for the year and has remained at this level ever since. This can be attributed to a general decline in both the illegal firearms trade and the number of gangsters in possession of guns since 2005. The number of members and associate members of organized criminal syndicates is also dropping. The total of just 34,500 as of the end of 2017 was the lowest recorded since statistics were first compiled in 1958.