Society Apr 20, 2018
The number of employed senior citizens in Japan now exceeds 8 million. Companies are actively seeking older workers in a bid to overcome labor shortages. Senior citizens, for their part, are eager to remain on the job even past retirement age.

According to the 2017 Labor Force Survey conducted by the Ministry of Internal Affairs and Communications, the number of employed senior citizens (65 and older) in Japan reached a record 8.07 million. Elderly workers increased by 370,000 compared to 2016, bringing the ratio of senior citizens in the overall workforce of 65.3 million to 12.3%, also a record high. 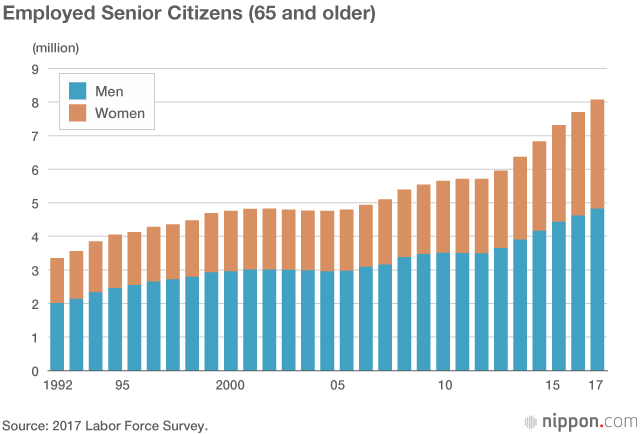 The increase is tied to Japan’s shrinking core labor force (age 15 to 64), falling birthrate, and the government’s ongoing efforts to curb excessive working hours through work-style reforms. Faced with severe worker shortages, companies are increasingly turning to senior-citizen to make up labor shortfalls.

Another factor is the changing outlook of senior citizens as people live longer and healthier lives. According to a 2014 Cabinet Office survey on the daily life of senior citizens, 42% of employees 60 years or older responded that they would like to continue working as long as they are able. The overwhelming majority of respondents indicated they would like to continue working into their 70s or 80s. 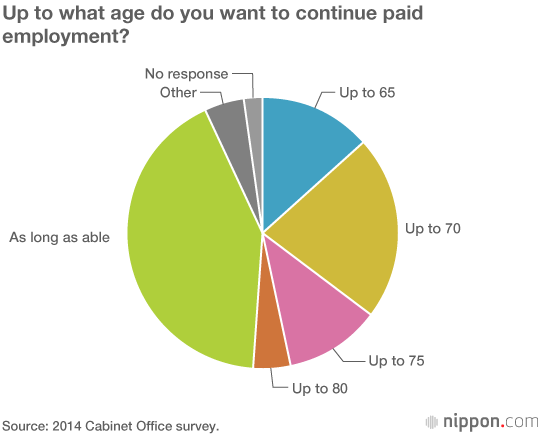 (Translated from Japanese. Banner photo: An older worker who has chosen to stay on the job past retirement age. © Jiji)