Number of Suicides in Japan Declines for Eighth Consecutive Year

Society May 2, 2018
Statistics for 2017 show Japan’s suicide rate fell for the eighth consecutive year. Looking by gender, twice as many men took their lives as women.

According to National Police Agency figures, 21,321 people in Japan committed suicide in 2017. This was 576 fewer than in 2016, marking the eighth consecutive annual decline. The number of women who took their own lives dropped to 6,495, the second straight year of record decline and the lowest total since 1978 when statistics on suicide first began to be kept. The figure for men, although 2.3 times greater than for women, also continued its downward trend, totaling 14,826. Looking at the causes and motives, the most common factor was health problems, followed by economic and livelihood issues, family problems, and work-related problems. 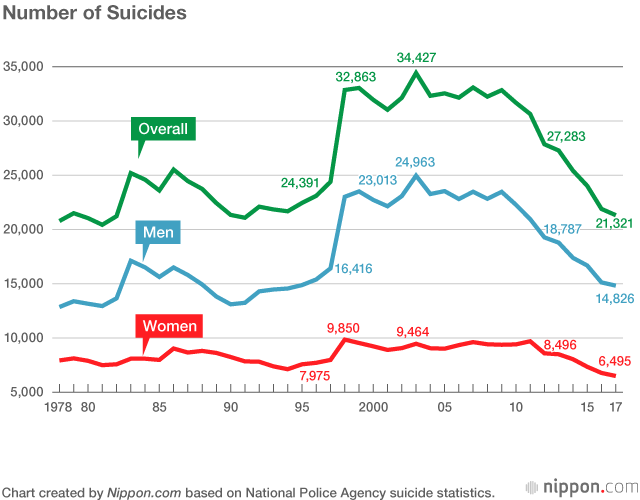 The government in laying out its general suicide prevention policies in 2017 recognized that even while the annual number of suicides has been trending downward, the figure remains abnormally high.