Society May 16, 2018
Sakurajima is a symbol of Kagoshima Prefecture. The volcano has been extremely active since 2009.

At the mention of Kagoshima Prefecture, most Japanese have an image of the smoke slowly billowing from Sakurajima. The volcano is a kind of symbol of the prefecture. Sakurajima used to be an island, as is reflected in its name—since jima or shima means “island” in Japanese—but the lava from a major eruption in 1914 connected the island to the Ōsumi Peninsula on the mainland of Kyūshū. Sakurajima has two main craters: the Minamidake crater and the Shōwa crater. In 2006, the Shōwa crater erupted for the first time in 58 years, and since then most of the eruptions from the volcano have been from this crater. The volcano became particularly active from 2009. During the period from 2010 to 2013 and in 2015 there were over 1,000 annual eruptions (defined as exceeding a given magnitude). Local people have become accustomed to the two or three times a day that the volcano tends to erupt. In the case of such eruptions, the Kagoshima weather forecast includes information on the areas expected to be affected by volcanic ash. 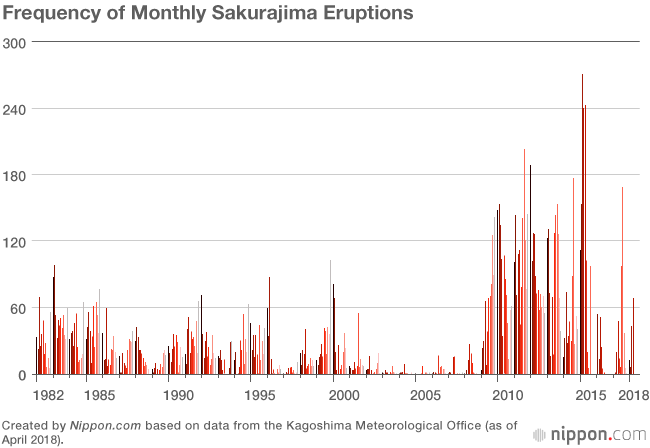 Around 4,500 people inhabit Sakurajima, and the nearby city of Kagoshima, with a population of roughly 600,000 people, is located around four kilometers from the volcano, separated by the coastal waters. It is rare for any city in the world to be situated so near to a volcano that erupts daily. Thanks to the data-based system of predictions and early warnings, only two people have been killed as a result of eruptions since the major 1914 eruption—one in 1946 and another in 1955. Local authorities also conduct a large-scale evacuation drill every January.

(Translated from Japanese. Banner photo: Sakurajima viewed from downtown in the city of Kagoshima. © Jiji.)