Society May 22, 2018
At 28.2%, the men’s smoking rate in Japan has dropped to just one-third of its 1966 peak, but remains high compared to other developed countries.

The male smoking rate in 2017 was roughly one-third that of 1966, when it peaked at 83.7%. Compared to other countries around the world, however, Japan’s smoking rate could hardly be described as low. According to the World Health Statistics 2016, compiled by the World Health Organization, Japan had the highest rate of male smoking among Group of Seven countries and ranked sixtieth overall out of 128 countries. 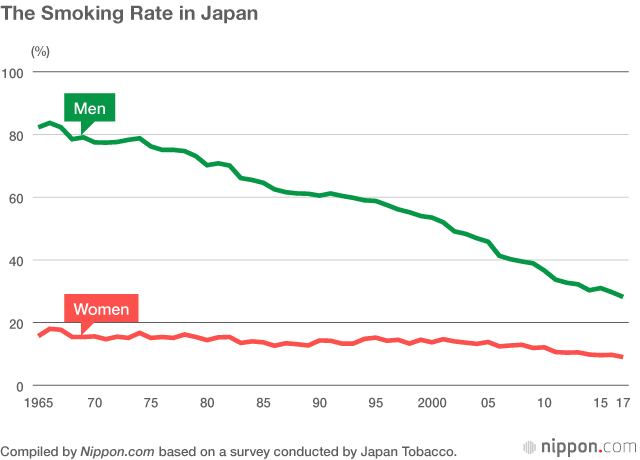 The government’s fiscal 2018 outline for tax reform established a ¥3 tax increase on each cigarette to be implemented over a four-year period, starting in October 2018. As of May 2018, a 20-cigarette pack of JT’s leading Mevius brand (known as Mild Seven until 2012) sold for ¥440. But with the tax increase of ¥60 per pack, combined with the rise in the consumption tax from October 2019, the price of a pack will rise to over ¥500. This is double the price of ¥250 two decades earlier, around 2000. Cost is a factor behind the decreasing smoking rate in Japan.

Many countries in Europe are implementing far greater price increases than Japan. One example is France, where the government announced its plan to raise the price of cigarettes to €10 (approximately ¥1,300) by 2020. Tobacco will remain relatively cheap in Japan, even after the upcoming tax increase, when compared to other economically advanced countries.

(Translated from Japanese. Banner photo: A smoking area separated by a partition. © Jiji.)