Society May 24, 2018
Around 1.9 million Christians live in Japan. They are relatively more common in the west of the country.

As of December 31, 2016, the population of Christians in Japan numbered 1.9 million, according to a statistical study on religion released by the Agency for Cultural Affairs. Around 60% of the Christian population lives in Tokyo and Kanagawa Prefecture, which account for 856,646 and 304,358 believers, respectively.

In a prefectural ranking of the number of Christians per 10,000 people, Tokyo comes in first at 628.2, followed by Nagasaki Prefecture at 476.4. Among the 15 prefectures with the highest ratios of Christian residents, 12 are located in western Japan. The two notable exceptions to the higher proportion of Christians in the west are Tokyo and Kanagawa. The latter prefecture is the home of Yokohama, a port city that has had a significant foreign population since it was opened to foreign trade in the nineteenth century.

Compiled by Nippon.com based on the fiscal 2017 statistical study of religion published by the Agency for Cultural Affairs and 2016 population data collected by the Ministry of Health, Labor, and Welfare. 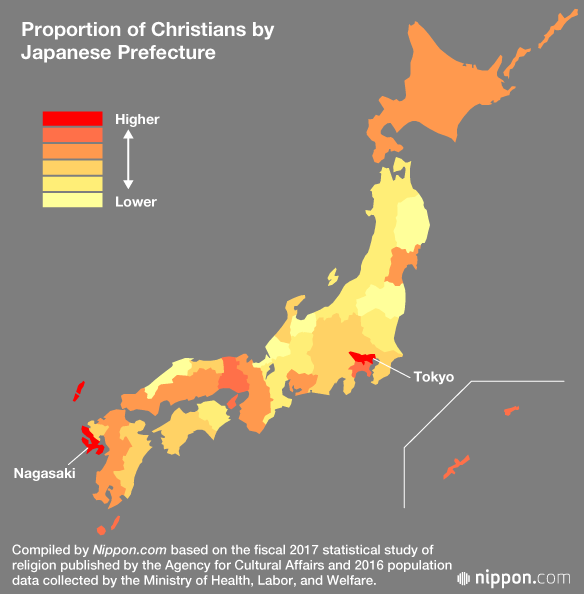 In 1549, the Jesuit missionary Francis Xavier landed in Japan, in the area now known as Kagoshima Prefecture, with the intention of traveling to the capital city Kyoto. He began his missionary work in Kyūshū, gathering followers and even converting and baptizing some feudal lords (daimyō). Under their protection, Christian priests were able to carry out their missionary work. Christianity was later banned in Japan by the Edo authorities, but despite government repression small numbers of “hidden Christians” continued to practice their religion clandestinely in Nagasaki and the Amakusa islands in western Kyūshū.

Japan’s large urban areas rank high in terms of sheer numbers of Christians, but the per-capita figures reveal more about the history of Christianity in Japan, and its relative popularity in the west of the country. (The statistics on Christians in the Agency for Cultural Affairs’ study were compiled based on reports issued by religious groups.)