Society May 25, 2018
Every year around 130,000 trains run on the Tōkaidō Shinkansen high-speed train line linking Tokyo and Osaka. The trains run with an average delay of just 24 seconds.

The Tōkaidō Shinkansen—a 552.6-kilometer train line that links Tokyo and Shin-Osaka Stations—debuted in 1964, just prior to the Tokyo Olympics. Its trains were the first in the world to achieve a speed of 200 kilometers per hour. Half a century later with the debut of the Nozomi train service, the top speed rose to 285 kilometers per hour. But the Tōkaidō Shinkansen service boasts more than just speed.

According to the 2017 annual report of the Central Japan Railway Company, an average of 365 trains run each day on the line. This means that trains traveling at some of the top speeds in the world are running every three to six minutes, which is the same operational pace as the commuter trains in Tokyo. They carry an average of around 452,000 passengers. Despite the train frequency and passenger volume, the line has not experienced any passenger fatalities from accidents like collisions, derailing, or fire, during its entire history.

In fiscal 2016, around 130,000 services ran on the line, with an average delay per train of just 24 seconds. Considering that there were unavoidable delays during that period due to natural causes, such as earthquakes, heavy rain, and blizzards, this means the normal trains ran on time almost down to the second. 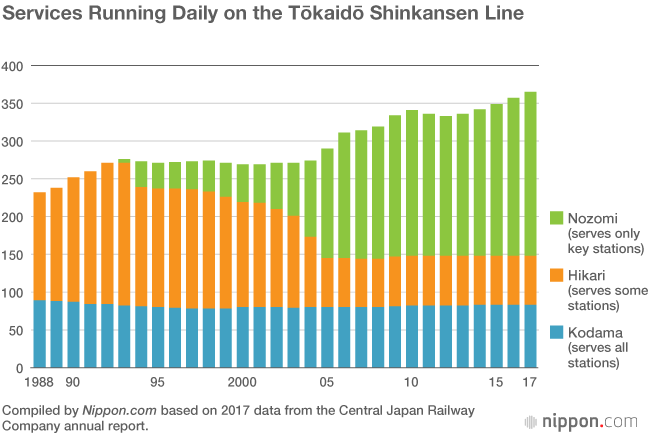 Compiled by Nippon.com based on 2017 data from the Central Japan Railway Company annual report.