Cancer Remains Leading Cause of Death in Japan

Health Society Jun 11, 2018
As Japanese people live longer, cancer is increasingly common as a cause of death.

Cancer was the leading cause of death among Japanese in 2016, followed by heart disease and pneumonia, according to a Ministry of Health, Labor, and Welfare report. Ever since 1947, when data began to be regularly kept, cancer has had a steadily rising death rate—calculated in the statistics as the number of deaths per 100,000 people—and since 1981 it has remained the leading cause of death. In 2016, 372,986 people died of cancer in Japan, accounting for 28.5% of all deaths that year. 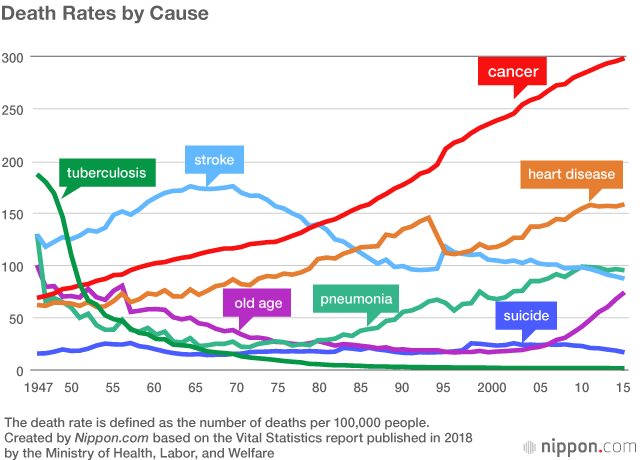 Around one out of every two Japanese will get cancer, it is said, but the dramatic improvement in medical surgery as well as the greater precision of early detection and treatment has raised the survival rate of cancer patients. It is no longer always an untreatable disease, as it was in the past, but still the death rate from cancer is inevitably rising along with the graying of the Japanese society.

The aging of the Japanese population is also a factor behind the rising number of deaths from pneumonia, which is now the third most common cause of death. Aspiration pneumonia in particular is on the rise among the elderly. This is the result of food mistakenly entering the trachea and generating bacteria in the lungs that causes an inflammation.

Meanwhile, cases of tuberculosis, which was once the top cause of death in Japan, have been dramatically reduced in the postwar era through vaccination and improvements in nutrition, and even those who do contract the disease are much less likely to die from it.