Society Jun 25, 2018
More elderly people in Japan are voluntarily returning their driver’s licenses. This trend has been expanding amid the regular occurrence of serious accidents and the introduction of mandatory cognitive tests for drivers 75 and older.

A growing number of elderly in Japan are voluntarily returning their driver’s licenses. A system was introduced in 1998 in response to the aging of Japanese society, but it was only around 2012 that the number of elderly drivers choosing to do so began to noticeably increase. A growing social trend has been encouraging the returning of licenses by appealing to the elderly themselves or their family members. This trend takes place against the backdrop of the regular occurrence of serious traffic accidents caused by elderly drivers, such as collisions with pedestrians due to pressing the accelerator instead of the brake pedal or accidents resulting from a driver traveling the wrong way on a highway.

In 2017, 423,800 elderly people returned their driver’s licenses, marking the highest number since the system was introduced. That year 253,900 people aged 75 or older returned their licenses, which was a 56% increase over the previous year. One major factor leading to this increase is that in March 2017, Japan introduced a new cognitive test for drivers in that age bracket. Drivers 75 and older must renew their license every three years and when they do so they are administered a cognitive test and if they are determined to be at risk for dementia, they must consult a doctor even if they have never committed any traffic violations or caused any accidents to date. In addition, drivers who run a red light or forget to indicate to turn are also administered a cognitive test, which serves as an opportunity to consider whether it is wise to consider driving or not. 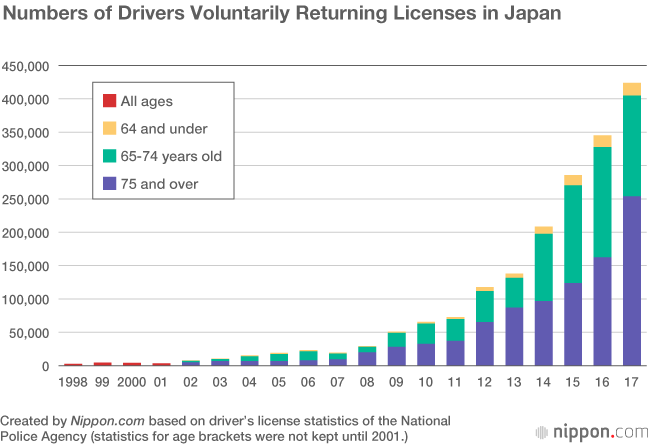 Despite the increase in the elderly forgoing driving, there were still 5.4 million drivers aged 75 or older in Japan as of the end of 2017, so that the proportion returning their licenses is only around 5%. Municipal governments nationwide are encouraging the voluntary return of licenses by providing special benefits to those who participate, such as discounts on the use of public transportation. In larger cities with extensive public transportation networks it is relatively easy for an elderly person to give up driving, but in mountainous areas, where there is no train service and bus lines have either been discontinued or reduced to just a few buses a day, people rely on cars to do their shopping or go to the hospital for a checkup. The effort to promote the returning of licenses must therefore be accompanied by measures to meet the transportation needs of people in such areas.