Society Jun 20, 2018
Official statistics on Japan’s homeless population indicate a drop since 2016, but critics contend that they are not comprehensive.

The National Survey on Homelessness in Japan conducted in January 2017 by the Ministry of Health, Labor, and Welfare found that there were 5,534 homeless people in Japan, or 701 fewer people than when the same survey was conducted in January 2016. Of these, 5,168 were men and 196 were women. As the survey was conducted visually, there were also 170 people whose gender could not be determined. 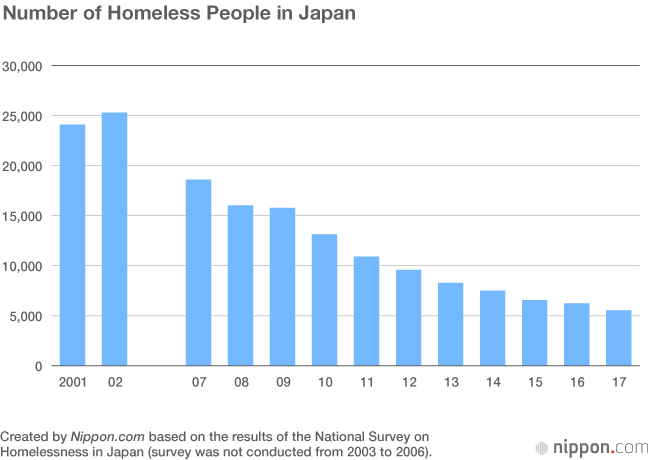 The backdrop to the decrease in the number of recorded homeless people includes the efforts of local governments to focus more attention on facilities to assist people’s lives and foster independence, as well as the improved job market as businesses look for people to meet the labor shortage. Tokyo has set up a support center to offer temporary protection to the homeless and those in danger of falling into homelessness through measures that include providing meals and lodging as well as skills training and job-hunting support.

Some have indicated, however, that the survey does not grasp the true picture of homelessness since it limits the definition of the homeless to only those living in certain locations, while overlooking those who are staying in Internet cafes or 24-hour fast food restaurants and the like.