Society Jun 26, 2018
The three main types of meat eaten in Japan are beef, pork, and chicken, with chicken being consumed the most. In recent years, convenience stores have played a lead role in this increase.

The Ministry of Agriculture, Forestry, and Fisheries’ food supply and demand statistics show that meat consumption per capita in 2016 was 31.6 kilograms, a new record high. Chicken is a leading factor in this raise in consumption. As it is cheaper and regarded as a healthy low-fat choice compared to beef and pork, consumption has been increasing rapidly since 2005. In 2012, it became the number one meat consumed, overtaking pork, which had been a staunch favorite for many years. 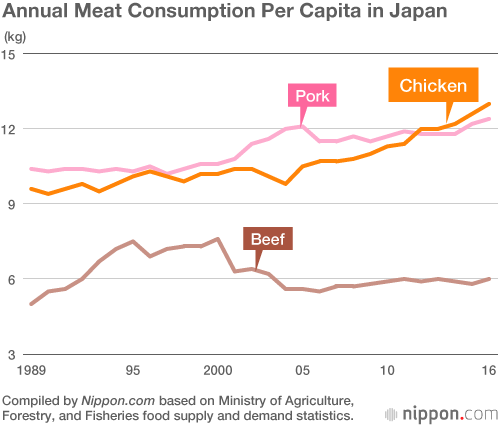 Fueling this rise is the popularity of what is known in Japan as ”salad chicken,” which was first launched by convenience store chain 7-Eleven in 2013. This product is individually vacuum-packed chicken breasts that have been seasoned and softly steamed. It is low-calorie, low-carbohydrate, and high-protein, so it has been well received by women, middle-aged, and elderly persons. Other convenience stores and supermarkets have since developed their own varieties and there is now a range of flavors, such as herb and curry. Food magazines also sometimes introduce easy recipes using salad chicken and its popularity is expected to grow. Fuji Keizai, a marketing research group based in Tokyo, estimates that salad chicken sales will increase from ¥26.9 billion in 2017 to ¥31.1 billion by 2022.

A poultry distribution statistics survey conducted by MAFF indicates the number of shipments of young chickens (those less than 3 months of age since hatching) has been gradually increasing, with 685.1 million birds recorded in 2017. 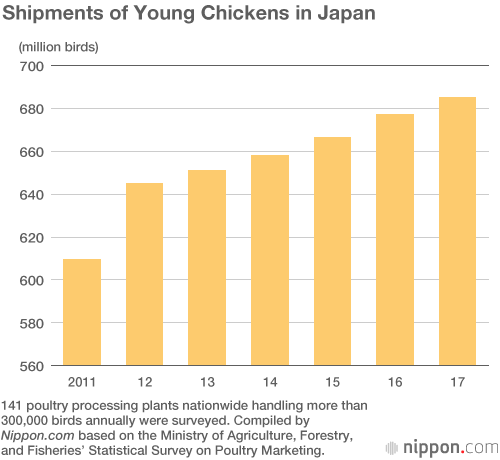 141 poultry processing plants nationwide handling more than 300,000 birds annually were surveyed. Compiled by Nippon.com based on the Ministry of Agriculture, Forestry, and Fisheries’ Statistical Survey on Poultry Marketing.

(Translated from Japanese. Banner photo: A variety of precooked "salad chicken" products are available at convenience stores and other outlets. © Pixta.)