Society Jul 4, 2018
Japanese wines have been in the spotlight amid an ongoing wine boom that began around 2012. A wine must be made with 100% Japanese grapes to be considered a “Japanese wine.” Domestic production of wine grapes has been rising, but the aging of wine cultivators in Japan places a limit on how much production can be increased. Faced with this situation, major winemakers have been expanding their own cultivation of wine grapes.

According to the National Tax Agency, 15,849 kiloliters of Japanese wine was shipped in fiscal 2016, marking a 5.2% year-on-year increase. This is still rather insignificant compared to Japan’s overall wine consumption, but the amount is expected to continue rising in the future.

The global reputation of Japanese wines has been growing, as seen in the numerous international awards they have garnered in recent years. One of the first milestones was reached in 2013, when a white wine from the Yamanashi area, Grace winery’s 2012 Gris de Koshu, won a gold medal at the Decanter Asia Wine Awards sponsored by the British wine magazine Decanter. This growing respect is reflected in robust exports of Japanese wine, which saw an annual leap of 26% in fiscal 2016.

The recent wine boom has been accompanied by an upward trend in the quantity of wine grapes produced domestically. A study conducted by the Ministry of Agriculture, Forestry, and Fisheries found that 17,280 tons of wine grapes were produced in 2015, marking the highest point since 2003, when such statistics were first kept. 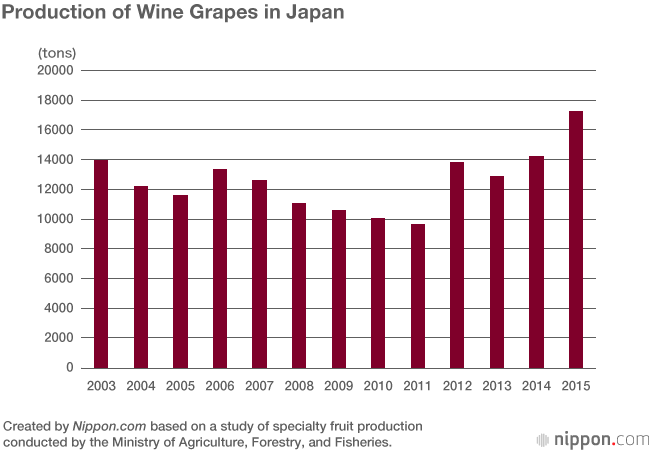 Japanese wines, which must use 100% domestic grapes, are growing in popularity, but the aging of farmers involved in grape cultivation will make a challenge to further raise wine-grape production. This situation has led some major winemakers in Yamanashi, Hokkaidō, and other prefectures to begin growing their own grapes. A system is emerging to increase the production of Japanese wine, involving such efforts as securing abandoned farm land for use as new vineyards.