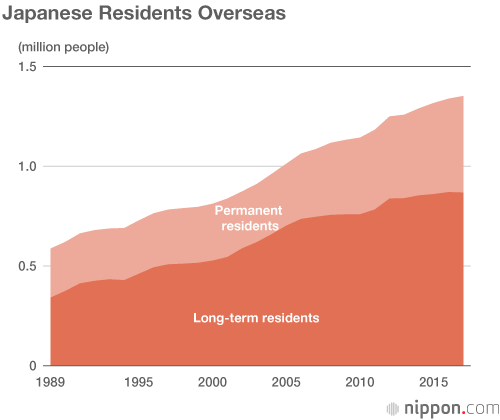 Japanese overseas residents include those who are living abroad on a long-term but temporary basis as company employees or students, and those who are permanently based in a foreign country. The long-term residents numbered 867,820 as of October 1, 2017, accounting for 64% of all overseas residents; this was a year-on-year decrease of 2,229 people or 0.3%. The remaining permanent residents numbered 484,150, a year-on-year increase of 15,722 or 3.4%. (Figures were not released regarding those living in Afghanistan, Iraq, and Syria due to security concerns.)

Since 1985, North America has been the most popular region for overseas Japanese residents, with 37% of them now living there. This is followed by Asia at 29% and Western Europe at 16%. Those three regions account for around 80% of all residents. The United States topped the list of countries where Japanese are living, with 32% of all residents, followed by China at 9.2%. The next most popular nation of residence was Australia at 7.2%, followed by Thailand at 5.4%, Canada at 5.2%, and Britain at 4.7%. The number of Japanese residing in China peaked in 2012 and has been in decline ever since. The number of Japanese in Brazil has also been in decline since 1976 and currently ranks seventh overall. Countries that saw significant year-on-year increases in Japanese residents included the Netherlands and Belgium, as well as the booming Southeast Asian economies of Cambodia, Myanmar, and Vietnam, 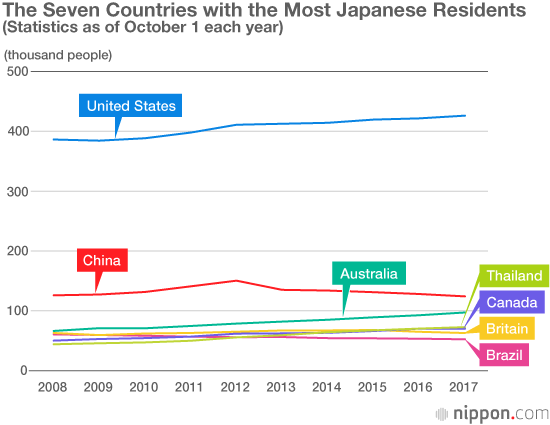 Overall, 48% of the residents were men and 52% were women. The number of men increased 0.7% year-on-year, while women increased by 1.3%. Since 1999, women have outnumbered men among overseas residents. Women are predominant among those in their twenties, thirties, and forties, whereas men are more common among those under 20 or 50 and older. 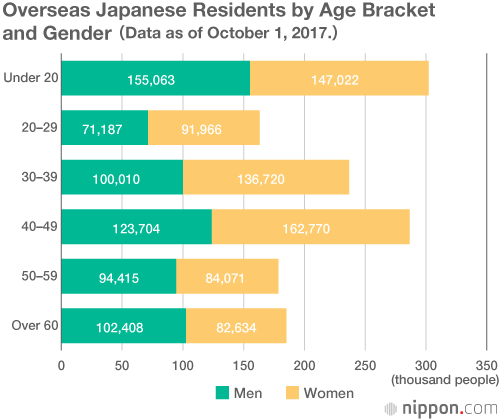