Society Jul 13, 2018
The number of Japanese elementary and junior-high students studying in foreign countries is on the rise as more of their parents are posted overseas.

As of April 15, 2017, a total of 82,571 Japanese elementary and junior-high students were studying overseas at either a Japanese school, an international school, or a school offering supplementary lessons in Japanese, for a year-on-year increase of 3,320. The figure for 2017 marks the first time to surpass the 80,000-mark and is 23,000 more students than in 2007. 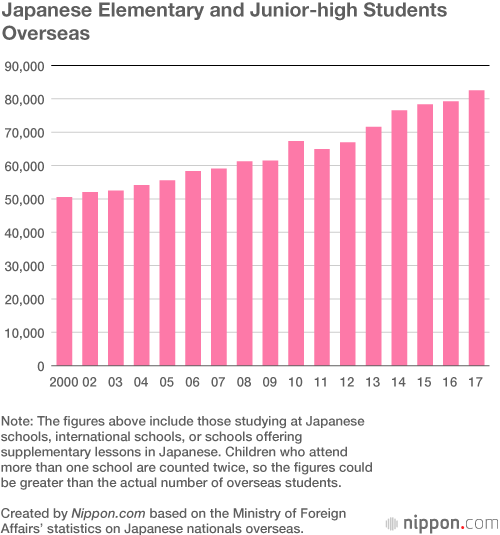 Japanese overseas students in Asia at the elementary- and junior-high school levels numbered 32,425 in 2017, an increase of more than 40% compared to the 22,801 in 2007. The expansion of Japanese companies into the region and the economic development of Asian countries, particularly China, whose level of trade with Japan has been higher than the level of US-Japan trade since 2004, have brought in more Japanese families. The number of Japanese students in Europe and the Americas is also rising, while the number in the Middle East, Africa, and Oceania has not changed significantly. 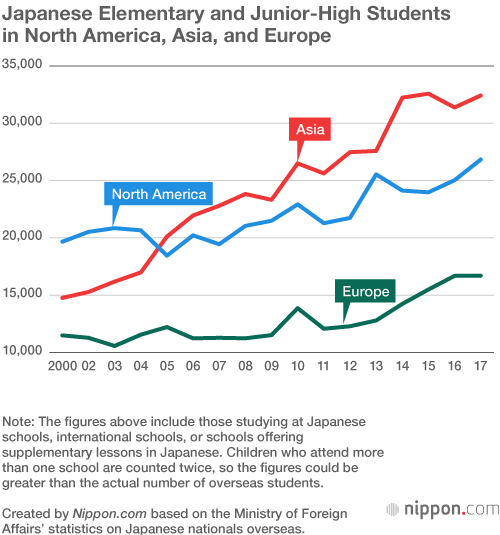 Level of enrollment at Japanese schools varies by region. In North America the overwhelming number of Japanese elementary and junior-high students attend local schools or international schools, rather than Japanese schools. Enrollment at the former is 12,171, compared to just 467 for the latter. The same is true of Oceania, where only 138 students attend Japanese schools, compared to the 1,705 enrolled in local or international schools. The tendency in English-speaking countries is to have Japanese students attend a local school as the main source of education, while bolstering their Japanese ability through extra courses after school or on weekends. This approach reflects the outlook of parents who believe that studying intensively in a native English environment is more advantageous for a child’s future career path.

By contrast, there is a near even split in Asia between those attending Japanese schools and those enrolled in local or international schools, with around 15,000 students attending each. In many cases, parents choosing Japanese schools reason that it is better in a non-English-speaking country for a child to follow the Japanese educational curriculum geared toward university entrance examination preparation than to acquire a local language that bears no relation to that examination.