Society Jul 20, 2018
As of January 1, 2018, Japan had a record high 2.5 million foreign residents. The country is increasingly relying on foreign workers to overcome its labor shortage.

As of January 1, 2018, Japan’s population was 127,707,259, according to a Ministry of Internal Affairs and Communications survey based on the country’s resident registration system. The number of Japanese citizens decreased by 374,055 year on year to 125,209,603. This was the greatest drop since the survey was first conducted in 1968, and the ninth consecutive decline since the population peaked in 2009. By contrast, the number of foreign residents rose by 174,228, for a total of 2,497,656. The image of Japan that emerges from these figures is a country with a graying, declining population that is compensating by relying on foreign labor.

By area, only six prefectures saw an increase in the number of Japanese citizens: Tokyo, Saitama, Kanagawa, Okinawa, Chiba, and Aichi Prefectures. Meanwhile, the number of foreigners rose in every one of Japan’s 46 prefectures except for Nagasaki.

The prefectures with the largest foreign populations were Tokyo at 521,502, Aichi at 235,320, Osaka at 225,269, and Kanagawa at 198,504. Many foreigners in Japan are living in one of Japan’s three main metropolitan areas or its key industrial zones, and around 70% of all foreign residents live in the top 10 prefectures. 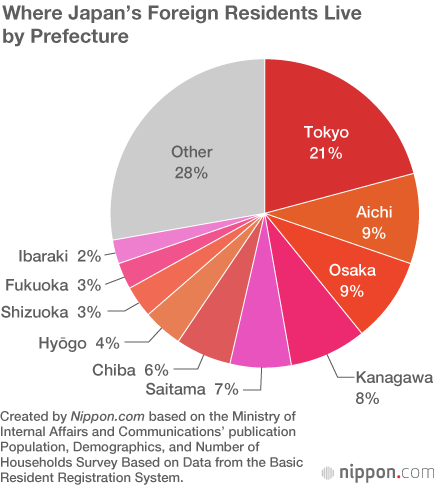 The number of foreigners has been rising for all three categories, but the increase has been particularly great in the working-age population, which is over 84% of the total population of foreign residents. 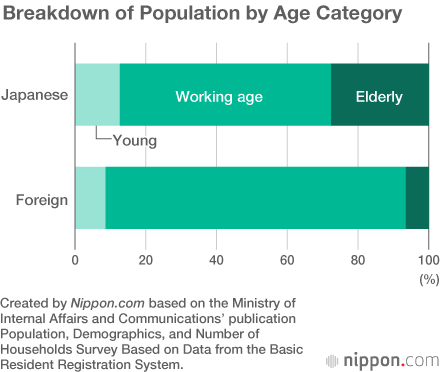