Diabetes Cases in Japan Top 10 Million for the First Time

Society Jul 30, 2018
A survey on health and nutrition conducted by the Ministry of Health, Labor, and Welfare found that 20 million people in Japan had either contracted or were at risk of contracting diabetes. With the number of diabetes patients expected to rise further with the graying of Japanese society, it will be vital to formulate policies to prevent serious complications from the disease.

More than 10 million Japanese people were “strongly suspected to have diabetes” as of 2016, according to a survey on national health and nutrition conducted by the Ministry of Health, Labor, and Welfare. This is an increase of 500,000 over the previous survey conducted in 2012, and the first time for the figure to surpass the 10-million mark. Meanwhile, the number of persons whose health results show they are at risk of contracting diabetes was around 10 million persons, a decrease of 1 million compared to the previous survey.

Factors thought to underlie the rise in diabetes cases in Japan include the increase in the number of elderly, who are more vulnerable to disease, and the rise in obesity due to a lack of exercise and irregular eating habits. Another reason is that more people have been diagnosed with the disease after being advised to visit a medical institution based on the results of the metabolic syndrome examination, which was introduced in 2008 to prevent lifestyle-related diseases. The number of diabetes cases is expected to rise to an even higher level in the years ahead as the aging of Japanese society accelerates.

The survey targeted around 11,000 people aged 20 or older, administering hemoglobin A1c tests to determine their blood sugar levels over the past one to two months. The results were used to estimate the total number of Japanese people with diabetes.

Once a person has contracted diabetes there is no cure. If the condition of the disease worsens, it can lead to blindness and the need for dialysis. A study conducted by the Japanese Society for Dialysis Therapy found that the number of dialysis patients rose from 53,017 in 1983 to 329,609 in 2016, of whom roughly 40% are sufferers of diabetic kidney disease.

Monthly medical costs for dialysis average roughly ¥400,000 per person, and total around ¥1.6 trillion annually for the country as a whole, accounting for approximately 4% of all medical expenditures. It is thus important to improve the daily habits of those at risk of diabetes and prevent the condition of those who have already contracted the disease from worsening. 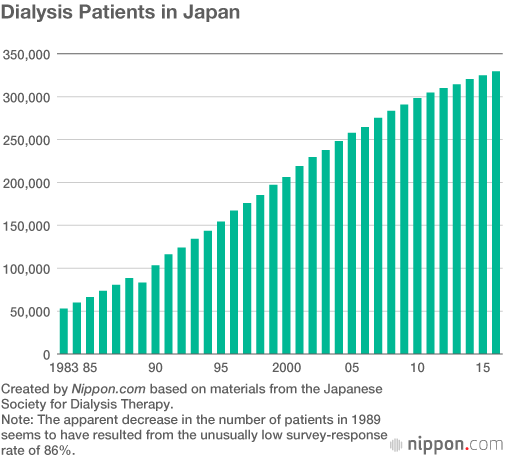