Society Aug 7, 2018
Almost every summer typhoons approaching or hitting Japan are in the news. Around 26 cyclonic storms are generated every year, but the typhoons that cause the heaviest damage are concentrated in September.

Every summer Japan is struck by typhoons, which at times result in major natural disasters.

The Japanese term taifū (typhoon) is used to describe a low-pressure system that develops over tropical waters in the Pacific Ocean and then heads toward Japan or other parts of East Asia, with maximum sustained surface winds averaging at least 17 meters per second over a period of 10 minutes. Typhoons are carried by higher altitude winds and have the tendency to head north under the influence of the Earth’s rotation. Many of the typhoons that approach the Japanese archipelago are carried by the prevailing westerly winds in a northeastern direction at high speeds.

The number of typhoons per year varies, but the annual average for the period from 1951 to 2017 was approximately 26, of which around 3 hit Japan. 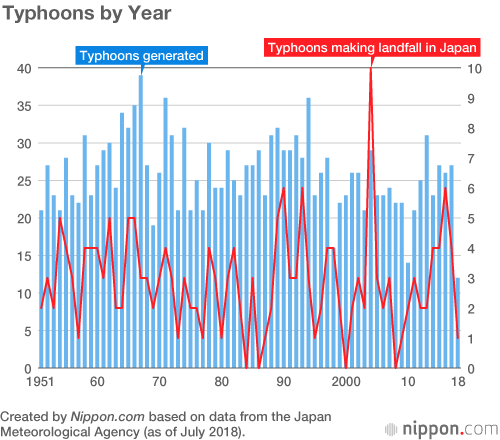 Typhoons’ development is fueled by the energy released when water vapor rising from the warm ocean surface condenses into water droplets within clouds. This is why most of the typhoons that are generated and make landfall occur from July to October, when ocean temperatures are higher. 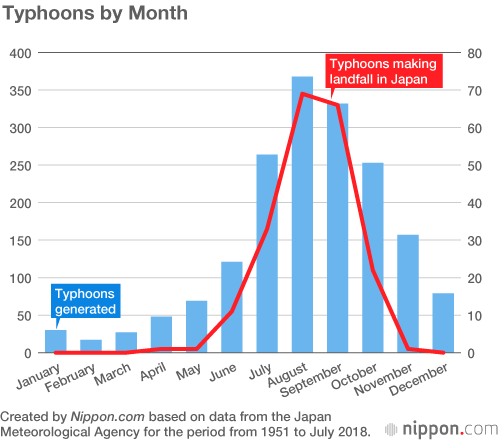 A list compiled by the Japan Meteorological Agency of typhoons that have caused major damage in Japan reveals that most struck in September. Not only do more typhoons form and make landfall during that month, but it is also the time when the autumn rain front hovers near Japan. At times humid air spinning on the eastern side of the typhoon is swept into the rain front, causing it to become more active and generating torrential rains.

The table above was created by Nippon.com based on data on the Japan Meteorological Agency’s website. Shaded areas are typhoons that struck Japan in September. The data was published by the JMA to show how figures for dead and missing were more than 1,000 persons for major typhoons that struck during the Shōwa era (1926–1989), whereas fatalities were less than 100 persons during the Heisei era (1989–present).