Japanese Lose Their Taste for Rice

Society Aug 8, 2018
Over the last 50 years, consumption of rice, the main staple in Japanese people’s diets, has halved.

In 1962, Japan’s economy was booming and the annual consumption of rice per capita was 118.3 kilograms. It has plummeted since, however, falling to 54.4 kilograms per person in 2016, or less than half the former amount. Calculating one bowl of white rice as weighing 60 grams, Japanese people ate 5.4 bowls each day on average in 1962 and a mere 2.5 bowls in 2016. While producers are making every effort to improve flavor and texture at agricultural experiment stations across the country, consumers’ move away from the former favorite staple shows no signs of slowing. 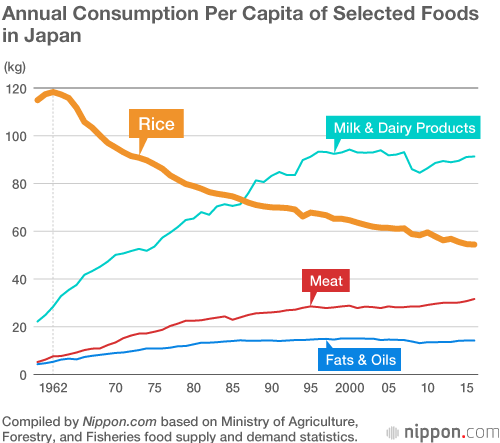 While Japanese people are not eating as much rice, their consumption of meat, milk and dairy products, and fats and oils has increased. Between 1962 and 2016, there was a 2.7-fold rise in consumption of fats and oils from 5.3 to 14.2 kilograms, a 4.2-fold rise for meat from 7.6 to 31.6 kilograms, and a 3.2-fold rise for milk and dairy products from 28.4 to 91.3 kilograms. In addition to the increased preference for a more Western-style diet, the tendency to eat less as people get older, and a fall in the overall population are contributory factors to reduced rice consumption. In recent years, there has also been a huge trend of people aiming to stay slim by cutting down on carbohydrates.

In a 2014 Ministry of Agriculture, Forestry, and Fisheries survey, nearly half of the respondents said they chose not to eat rice in the evenings because they “want to try a wide variety of staple foods.” On busy mornings, people also prefer to choose staple foods other than rice that can be eaten quickly and do not need much time for preparation and cleaning up.

According to a survey on family income and expenditure conducted by the Ministry of Internal Affairs and Communications, spending on bread overtook rice for the first time in 2011. In 2012, rice narrowly managed to overtake bread again; however, from 2013 onward, expenditure on bread has remained ahead of rice. 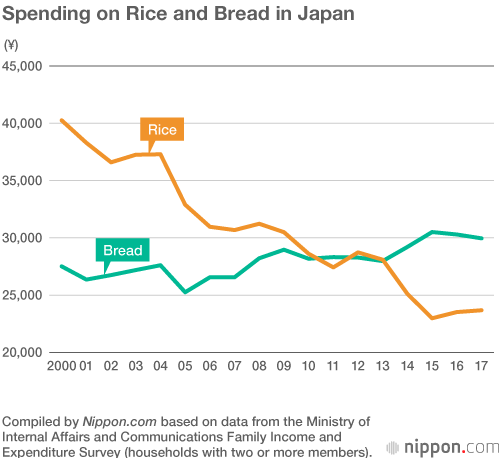