As of 2016, Japanese female doctors numbered just 67,493, or 21.1% of all doctors in Japan. Compared to the figures during the 1970s, when they accounted for under 10% of the nation’s MDs, the ratio has improved, but the gender gap is still large in Japanese medicine. 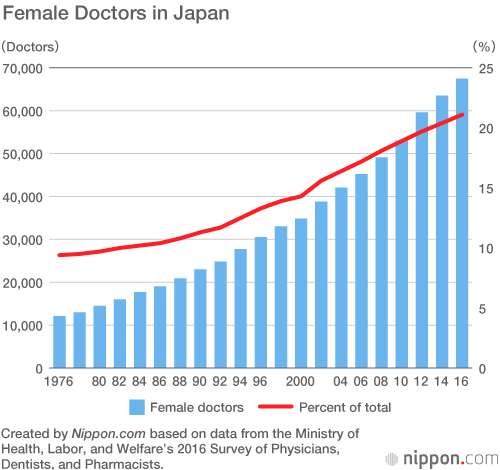 The OECD’s 2015 Health Statistics report reveals that the percentage of female doctors in Japan is noticeably lower than the overall ratio for OECD member nations, which stands at a simple average of 44.8% simple average and a weighted average of 39.3%. Japan also lags far behind other G7 countries: Britain leads the way with 47.2% female doctors, followed by Germany at 44.5%, France at 43.6%, Canada at 40.6%, and Italy at 39.8%. Japan is more than 10 percentage points behind the sixth-place country, the United States, where 34.1% of all doctors are women. 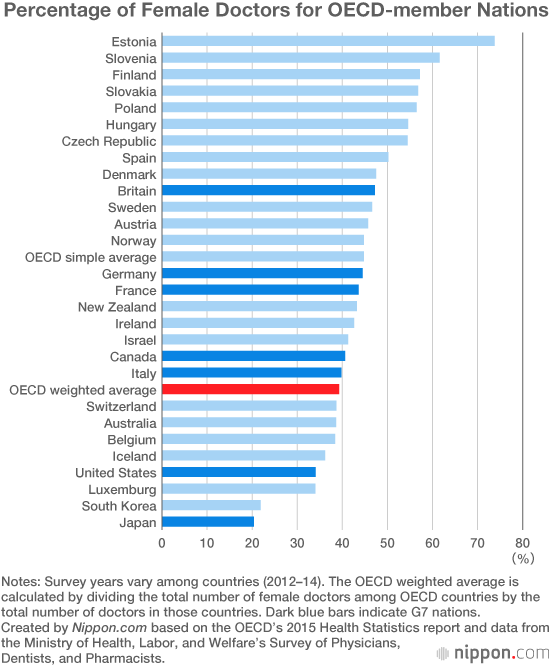 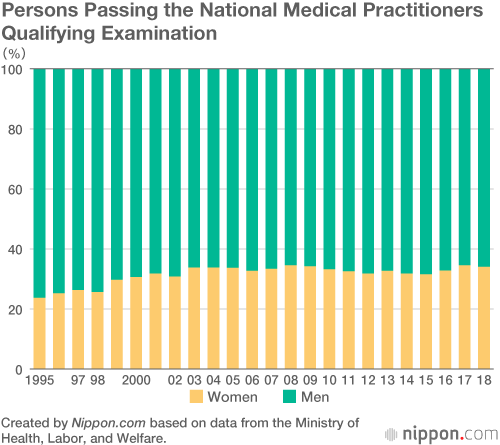 The ratio of men to women among those passing the National Medical Practitioners Qualifying Examination is 7:3, but the proportion of actual female doctors is even lower due to the gender gap with regard to hiring after individuals have been officially registered as physicians. Japan remains a country where, even today, awareness of “gender roles” is strong. In particular, women frequently play the central role in child-raising after giving birth. According to a 2016 survey conducted by the Ministry of Health, Labor, and Welfare, 28% of female doctors employed as full-time hospital physicians spend over 60 hours a week on the job, including time spent attending to patients, performing other work, and waiting between shifts. This situation, which makes it hard to balance work with childcare, is one factor that seems to account for the low percentage of female doctors in Japan.