The “Double Care” Generation Looking After Both Children and Parents

Late marriage and childbirth mean that it is increasingly common in Japan to look after aging parents at the same time as raising a family.

In a nationwide survey conducted by Sony Life Insurance, 12.3% of respondents said that they were currently facing double responsibilities of care, 12.8% said they had previous experience, and 4.0% both had previous experience and were again coping with double responsibilities. This means that approximately 30% of respondents have had to provide both types of care at the same time.

However, younger respondents were somewhat more likely to have begun elderly care first, with 19.6% of those in their thirties giving this response. One of the report’s findings is that late marriage and late childbirth will continue to become more common, meaning more people will be responsible for double care. 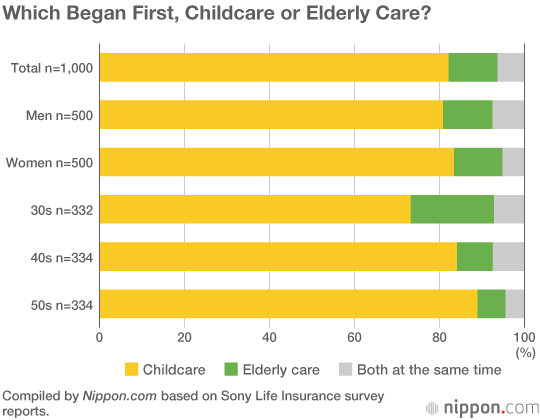 In addition, 436 respondents facing double care are employed, of whom 64% answered that “the current work place makes it easy to balance double care responsibilities with work”, while 36% said it was “difficult.”

For those who answered that it was difficult, men accounted for 44.7%, or more than double that of women at 21.1%. Japanese society still places a strong emphasis on roles and responsibilities, creating a complicated situation where men cannot easily turn down overtime and leave work on time or take reduced working hours to provide childcare and elderly care. By age, both men and women in their forties found it the most difficult to balance work with care responsibilities. 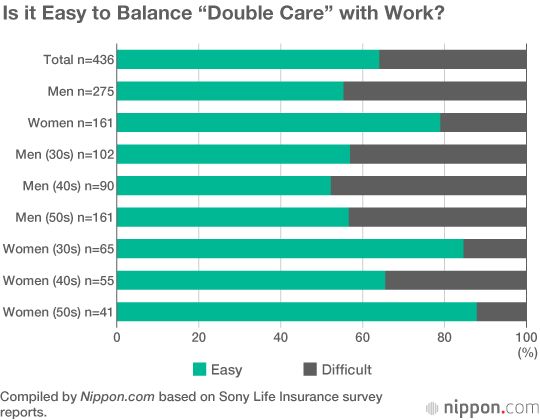 Some 10% of respondents saidthat they have had to quit work due to double responsibilities of care. The reasons (multiple answers were possible) included 36% who were unable to find a nursery for their child, so couldn’t achieve a work-care balance, 30% where the circumstances at work made it difficult to balance, and 27% who were unable to find a care facility for their parents.

Additionally, when asked if they thought public services were satisfactory for their needs, regarding both public elderly care and public childcare support services, three-quarters of respondents answered either “not really satisfactory” or “not satisfactory.” 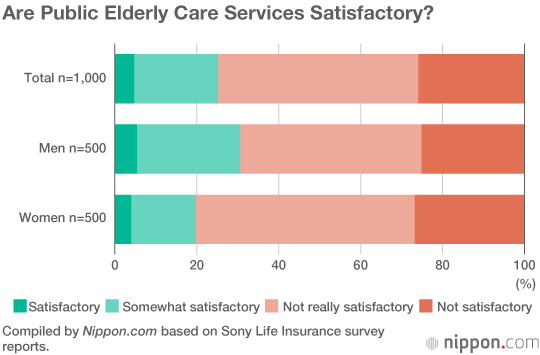 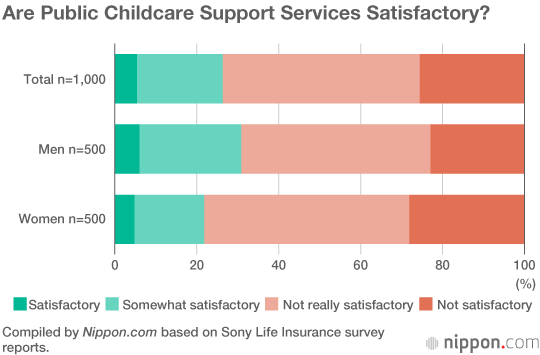 According to an Employment Status Survey published by the Ministry of Internal Affairs and Communications in July 2018, the number of people who quit their jobs due to elderly care and nursing responsibilities climbed to 99,100 (75,100 of whom were women) in the year up to September 2017. While this number has fallen from the 101,100 recorded at the time of the last survey in 2012, it is still at a high level. To achieve a society in which women can be active as the government proposes, along with the necessary countermeasures to prevent people having to quit work due to nursing care responsibilities, countermeasures are also needed that take into consideration those who have these double responsibilities of nursing care and childcare.