Only a Fraction of Domestic Violence Victims Contact the Police

Society Aug 27, 2018
The number of consultations with the police from nationwide victims of domestic violence in 2017 was 72,455, setting a new record for Japan. A survey from the Cabinet Office reveals, however, that only 2.2% of those who are subjected to spousal violence actually contact and consult with the police.

Information compiled by the National Police Agency shows that the number of consultations with the police from victims of domestic violence in 2017 rose 3.6% year-on-year, to 72,455 in total. This is the largest number since Japan introduced the Act on the Prevention of Spousal Violence and the Protection of Victims in 2001. Among these victims, 83%, or 60,015, were women. 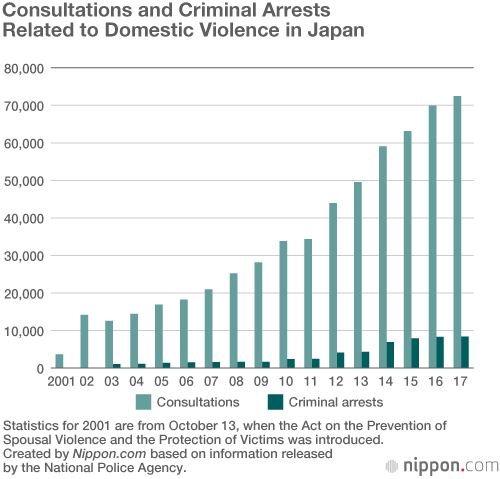 The number of consultations with police are only the tip of the iceberg with regard to the actual harm caused by domestic violence.

A 2017 Cabinet Office survey of 5,000 men and women nationwide found that among those who were or had been married (2,485 people), 9.7% had “several times” and 16.4% “once or twice” experienced physical violence, psychological attacks, financial pressure, or rape.

Among the 650 persons who had been harmed in some manner or another, nearly half, or 48.9%, said they had not confided or consulted with anyone about the incident, while only 2.2% had contacted and consulted with the police. 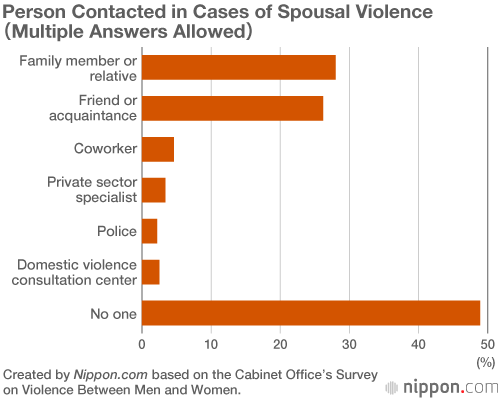 With regard to whether a specific act constituted “violence” if it occurred between a married couple (including common-law couples or married couples living separately), quite a few of the survey respondents said that there were “cases where it did and cases where it did not” or that “it did not constitute violence.” The concrete acts in question included cases where physical blows had been struck, such as slapping or forced sexual intercourse, as well as cases where a partner sought to control the other’s behavior by not allowing conversations with members of the opposite sex or monitoring phone calls and emails received from friends. When asked to explain the reason why such acts were not violent, 53.7% said that they were “within the boundaries of a domestic dispute,” 29.2% said that they were “common between couples,” and 14.4% said that they were “permissible between couples.” The responses revealed that many respondents did not even have an awareness of themselves as victims. 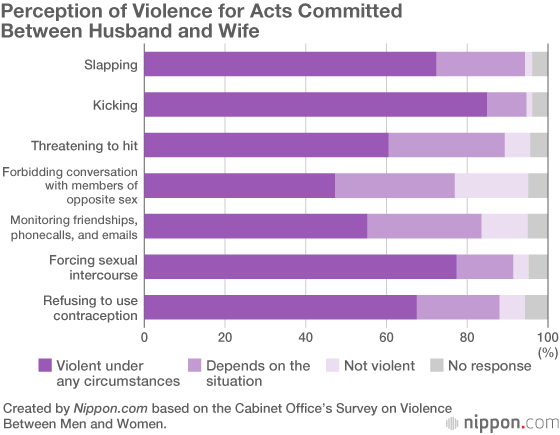 The Cabinet Office has set up a nationwide domestic violence hotline (0570-0-55210) that directs victims to the nearest consultation facility in their area. The Ministry of Health, Labor, and Welfare has taken measures that include posting female counselors at consultation centers and other facilities in prefectures throughout the country. In addition, local governments and police departments have set up their own consultation desks and produced pamphlets to raise awareness.